Two funny bits from Too Cool To Be Forgotten

I reviewed two new graphic novels for this week's Best Shots column that I didn't cover here: Alex Robinson's Too Cool To Be Forgotten and Elizabeth Genco and Sami Makkonen's Blue. So if you care what I had to say about either of those and haven't already, head on over to Newsarama and read away.

As I said there, Robinson's book didn't quite earn a literal "I laughed, I cried" review, but it was in the ball park, as it did make me laugh (quietly) aloud while reading it alone in a coffee shop, and I did feel a bit melancholy during certain bits. Of the parts that made me laugh, here are two of my favorite scenes, to give you a better sense of how awesome the book is. A better sense than my words could probably convey, anyway.

So the premise is that middle-aged Andy Wicks finds himself flung backwards through time and somehow reliving high school. In this scene, he's just arrived and doesn't yet realize what's going on, or that his middle-aged mind is now in his teenage body (Robinson draws him middle-aged, because that's how he still thinks of himself). 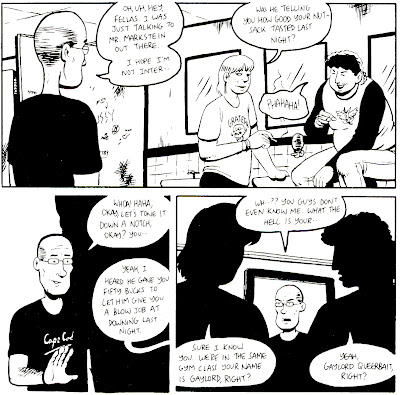 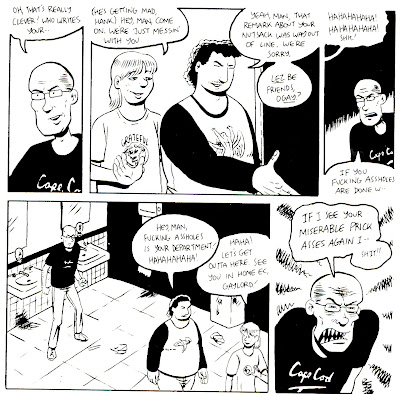 Ah, the casual cruelty, naieve homophobia and juvenile humor of high school! Robinson captures both the stupid but funny-stupid humor of the teens and the frustrated reaction of the victim so perfectly, particularly due to the fact that Andy is still outsider, and has apparently forgotten the way high schoolers talk to each other.

Once he realizes what's going on and adjusts, though, he has a much easier time dishing it out. Here he is, now drawn as a teenager, wearing spikes in his hair because, hell, he's temporarily a teenager again, so why not? 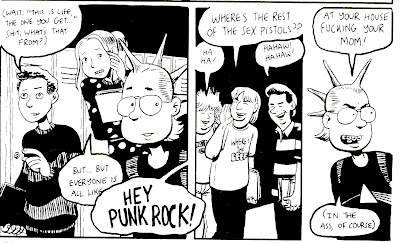 While responding with some variation of "your mother" was something I considered absolutely hilarious back in high school (and continue to find quite amusing), it's the parenthetical addendum Andy makes above that just kills me, what with the "of course."
Posted by Caleb at 7:29 PM

Labels: alex robinson, evidence that I am actually a grade-school child, links