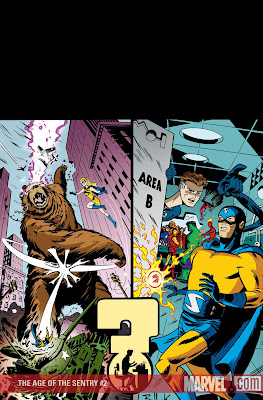 THE AGE OF THE SENTRY #2 (of 6)
Written by JEFF PARKER & PAUL TOBIN
Penciled by NICK DRAGOTTA & MICHAEL CHO
Cover by DAVE BULLOCK
The Man Vs. Nature conflict reaches epic levels when The Sentry must face the towering Mauling Menace known as URSUS the ULTRABEAR! Also: Why are all the other heroes suddenly avoiding the Sentry? For all his powers, the Sentry now finds himself helpless, faced off against a wall of silence and lurking menace, standing alone until he can uncover the deadly clues leading to The Secret of Area B! Plus, the atomic menace of the Super-Collider! All this in one full-color issue! Be there!
32 PGS./Rated A ...$2.99

"Ursus the Ultrabear?" I think I have a new favorite three-word combination.

As to why all the other heroes are suddenly avoiding the Sentry, it’s probably because he’s lame and boring and they all hate him. That’s the reason comics readers tend to avoid him anyway. Of course, when you put Parker, Tobin, Dragotta and Bullock on a book featuring him, and throw around terms like “Ursus the Ultrabear,” you’ve got a pretty good chance of winning over a lot of those not-at-all-interested-in-The-Sentry readers.


AVENGERS: THE INITIATIVE #18
Written by DAN SLOTT & CHRISTOS N. GAGE
Penciled by STEFANO CASELLI
Cover by MARK BROOKS
Zombie Variant by TBA
SECRET INVASION TIE-IN!
THE EXPLOSIVE FINALE STARTS HERE!
Now that the KILL KREW knows Skrullowjacket's master plan, can they stop the TRUE purpose of the Fifty State Initiative? Plus: It's THOR GIRL vs. ULTRA GIRL! One is more than she appears to be... and the other's a Skrull. And, after fourteen issues, are we REALLY going to unmask MUTANT ZERO?!

I keep forgetting that there is a Mutant Zero, and that her identity is supposed to be a big secret.

Also, note the "zombie variant" mention. You'll see it a lot in this month's solicitations. I guess it's, like, a new October tradition at Marvel...?

DAREDEVIL #112
Written by ED BRUBAKER
Penciled by MICHAEL LARK
Cover by MARKO DJURDJEVIC
Zombie Variant by TRAVEL FOREMAN
The shadows of the city grow thick with ninja blades. The Hand is back in New York, on the hunt for something as yet unknown...but the enigmatic new Lady Bullseye is in league with them, and whatever they're after can't be good news for Daredevil and his friends. The first chapter of "Broken Hand" begins here —featuring Iron Fist, the Black Tarantula, and more!

"The shadows of the city grow thick with ninja blades..." Man, that is some fine solicitation copy. I do plan on reading Brubaker's Daredevil run in trade. One of these days. 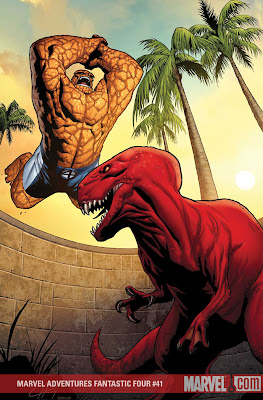 Devil Dinosaur! By David Hahn! I didn’t even know I wanted that until I saw this.


MARVEL ADVENTURES HULK #16
Written by PETER DAVID
Penciled by JUAN SANTACRUZ
Cover by TOM GRUMMETT
The protesters outside of a nuclear power plant are terrified of what might happen if the reactors are ever turned back on...but what they should be scared of is the fight between the Hulk and the Abomination happening inside! Russian spy Emil Blonsky infiltrated the facility, and thanks to a burst of gamma radiation, might just cause a nuclear disaster! Can the Hulk stop him?

Hulk fans from back in "the day" please note: This comic features the Hulk written by Peter David.

MARVEL ADVENTURES SUPER HEROES #4
Written by PAUL TOBIN
Penciled by ALVIN LEE
Cover by ROGER CRUZ
KLAW'S GOOD OL' COUNTRY REVIVAL: When Klaw, the master of sound, forms a country and western band, Iron Man, Spider-Man and the Hulk decide to investigate. Unfortunately, the Hulk gets hooked on Klaw's mournful music and, wanting to solve those cliché-ridden problems Klaw so beauuutifully sings about, starts returning every lost (and not so lost) dog to its owner, insists on driving a pickup truck, and goes in for some very extreme "Hulk-style" relationship counseling. While this draws a lot of media attention to Klaw's band, it's the Hulk (dang it!) getting all the press, making an irritated Klaw VERY jealous. The fight is ON!

I stopped reading at "forms a country and western band" to stand up, pump my fist and say Yesss! before sitting down and reading the rest of this solicit. If it's one-tenth as awesome as Cobra Commander’s plot to take over the world with a heavy metal band, this should be pretty damn awesome. 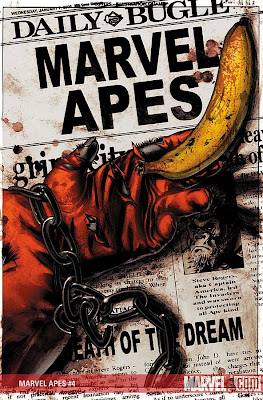 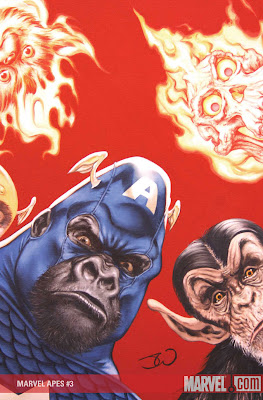 MARVEL APES #3 & 4 (of 4)
Written by KARL KESEL
Penciled by RAMON BACHS
Covers by JOHN WATSON
Variant Cover for Marvel Apes #3 by STEPHANIE BUSCEMA
Variant Cover for Marvel Apes #4 by ART ADAMS
THE FURRY, FURIOUS FINALE OF MARVEL'S MONKEYFIED MASTERPIECE!
It's Gorilla Warfare as the Simian Superheroes plot their primate plan against the human's homeworld-- and the only one who can stop them is... The Gibbon!?! Good thing he has help from... Speedball??!!?! We're doomed...
Don't miss the all-out ape action and primate (plus prosimian!) pandemonium in this-- the must-read mini-series of the month! Be the envy of your friends as people ask: "Is that a copy of MARVEL APES in your pocket... or are you just happy to see me?"

As someone whose pet peeves include people referring to gorillas and chimpanzees as monkeys, I appreciate the specificity of this solicit, which mentions apes, primates and prosimians (Hopefully this means we’ll get to see Batroc The Lemur).

Those are some pretty nice covers too. The Death of Cap homage is wonderful, and there’s something endearingly horrifying about the thought of Namor as a chmpanzee. 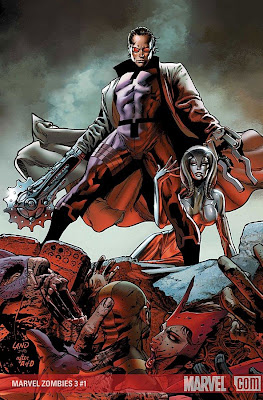 MARVEL ZOMBIES 3 #1 (of 4)
Written by FRED VAN LENTE
Penciled by KEV WALKER
Cover by GREG LAND
Board up Avengers Tower! Lock down the Baxter Building! The ravenous hordes of Marvel Zombies are invading ... the Marvel Universe! That's right, the next chapter of the MZ saga is a non-stop in-continuity gorefest with major implications for at least one Marvel hero! When the super-undead stumble into the MU from the Man-Thing's Nexus of All Realities, all of Florida is quarantined against the zombie plague. Time is quickly running out for a cure, so the Initiative sends a most unlikely group of heroes into the Zombieverse on a desperate mission to find the one item they need before the whole MU is consumed! The scream team of Fred Van Lente (INCREDIBLE HERCULES) and Kev Walker (ANNIHILATION: NOVA) unite for a Marvel Zombies story like you've never seen before!
32 PGS./Parental Advisory ...$3.99

Two of the factors most likely to stop me from reading a Marvel comic I'm interested in—the extra dollar tacked onto the price of a 22-page comic and the involvement of Greg Land—are in play here, so I guess I'll have to wait until October to see if this is still something I'll want to read (Fred Van Lente writing and the word “Man-Thing” make me think yes).

I will say that this is an instance where Land's art isn't as annoying as usual. His particular...process works better when he's doing an homage on purpose instead of swiping something and hoping nobody notices.


MONSTER-SIZE HULK #1
Written by JEFF PARKER
Pencils by TBA
Cover by GUISSEPPE CAMMUNCOLI
It's a knock-down, drag-out fight between the Gamma-powered Hulk, and the original science project gone wrong, the lightning-born Frankenstein's Monster! The science-spawned beast of the Victorian Age meets the modern menace of the Nuclear Age, and when these monsters mash, forget the torches and pitchforks... just run! Guest starring a hoary host of Marvel's scariest creatures and bogeymen smashing and terrorizing their way through this Monster-Sized issue!
56 PGS./Rated A...$3.99

Jeff Parker, the artist responsible for the best Hulk charity cover (and the writer responsible for most of the most fun Marvel comics of the last few years) pits the Hulk against Frankenstein. That sounds pretty cool. Not quite as cool as Hulk rafting down the Mississippi with his friend Jim, but pretty cool.


MIGHTY AVENGERS #19
Written by Brian Michael Bendis
Penciled by STEVE KURTH
Cover by MARKO DJURDJEVIC
SECRET INVASION TIE-IN!
Before the Skrulls invaded the human race, they battled the noble Kree in a bloodwar that has lasted centuries. And in this special Secret Invasion tie-in, the lives of two of the most famous Kree, Captain Mar-Vell and Marvel Boy, will alter the events of the Invasion forever. This special issue will have very serious consequences for the future of Mighty Avengers.

Hmm, no mention of any Avengers, Mighty or otherwise, in the solicit, but then there haven’t really been any Avengers in this title for a while now.


ULTIMATE SPIDER-MAN ANNUAL #3 Written by BRIAN MICHAEL BENDIS. Penciled by DAVID LAFUENTE. Cover by MARK BROOKS & RICHARD ISANOVE. The relationship between Peter Parker and Mary Jane is one of the most iconic and popular romances in all of comics -- and in this very special issue by series writer Brian Michael Bendis (SECRET INVASION), and red-hot artist David Lafuente [HELLCAT], that relationship delves into an area never before seen in any Spider-Man comic! Destined to be one of the most controversial issues of the year!

This is totally going to be about whether or not they should start doing it, and why they decide to wait, isn’t it? Man, this going to be great! I can’t wait to read it.

David Lafutente’s a pretty great artist too; if you’re not reading his Patsy Walker: Hellcat, I’d definitely recommend it. 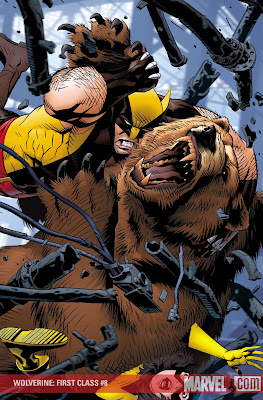 There seems to be a lot of superhero vs. bear action in this month's solicitations. I predict a very happy Chris Sims come October.
Posted by Caleb at 5:49 PM

There seems to be a lot of superhero vs. bear action in this month's solicitations.

Lotta gay rights groups are going to be mad.

The Marvel Adventures one with country-western Klaw and the Hulk does sound hilarious however.

Is it me, or is Bendis just marking time lately with the Avengers and all the Srulliness? It seems as though this thing has been going on FOREVER, without much forward progress.

I believe I've reached a new level of excitement with "Secret Invasion". I'm really looking froward to reading the "Secret Invasion" wikipedia page in 2010 and seeing how it all turned out.

It's a low level.

On the other hand, Klaw's county western band needs to be a multi-media event. Is it possible to get the guy that did the Nextwave theme to do a whole album?

Sally: no, it's not just you. Some of this Skrull stuff he's doing will look padded in the trade. And I can't understand half of it, or maybe I can't be bothered to care.

Well, by the time this whole Skrull Invasion business is finally finished and collected, the Trade is going to have to be about the size of a phone book.