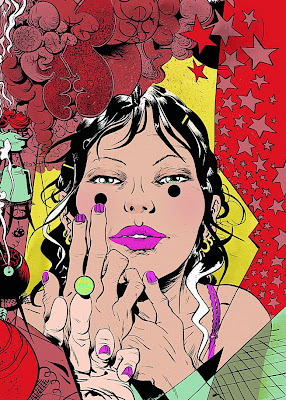 100% HC
Written by Paul Pope
Art and cover by Paul Pope
The edgy, groundbreaking epic from visionary Eisner Award winning creator Paul Pope is now available in hardcover! Collecting all five issues of the hard-hitting miniseries that takes a peek inside a cyberpunk vision of the year 2038 through the lives of six different people, this new volume includes a host of sketches, designs and other never-before-scene material from Pope.

If anyone’s wondering if this is any good, I tell you now that it is. 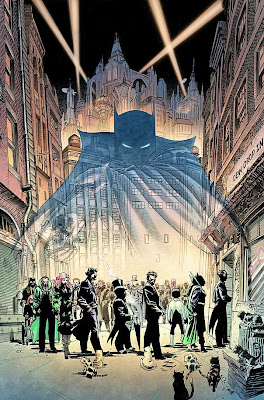 BATMAN #686
Written by Neil Gaiman
Art by Andy Kubert & Scott Williams
Covers by Andy Kubert and Alex Ross
“Whatever Happened to the Caped Crusader?” part 1 of 2! Best-selling author Neil Gaiman (THE SANDMAN) and superstar artist Andy Kubert (BATMAN, Marvel 1602) join forces for a special 2-part BATMAN event! “Whatever Happened to the Caped Crusader” is a captivating and mysterious tale the likes of which Batman and friends have never experienced before. Delving into the realms of life, death and the afterlife, Gaiman leaves no stone unturned as he explores every facet and era of Bruce Wayne’s life.

DETECTIVE COMICS #853
Written by Neil Gaiman
Art by Andy Kubert & Scott Williams
Cover by Andy Kubert
Variant sketch cover by Andy Kubert
“Whatever Happened to the Caped Crusader?” part 2 of 2! This second part of Neil Gaiman and Andy Kubert’s special collaboration is sure to be a BATMAN story for the ages. This extraordinary tale, told as only Gaiman and Kubert can, explores the intricate relationships between Bruce Wayne and his friends and adversaries and builds toward an exciting and unexpected climax. It’s a classic in the making!

If probably any other writer in the world attempted to riff on Alan Moore’s classic “last” Superman story, “Whatever Happened to the Man of Tomorrow?”, it would have seemed pretty uncool to me.

That’s quite a nice cover image by Andy Kubert for the first chapter. (The one for TEC ain’t too shabby either). I’ve stated and restated (ad nauseum) my displeasure with Batman artist Tony Daniel, who became the regular artist to take over for Kubert (who only managed, what, six issues? Five?). Not only do I not like Daniel’s art (I don’t), or think it’s awful (it is), but I think it was essentially ruining what seemed like a pretty interesting, once-in-Batman’s-life take on the character.

Looking at these images, I’m again reminded that we really missed out when Kubert failed to keep a monthly-ish schedule. 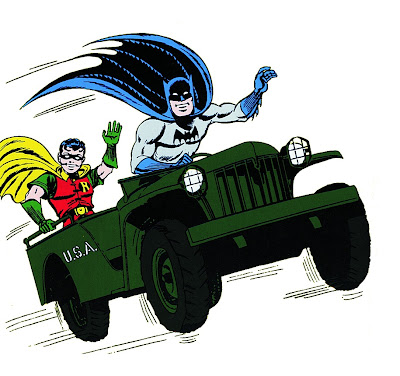 Why, that’s just a plain old army jeep Batman and Robin are riding around in. Doesn’t Batman have a Bat-jeep? 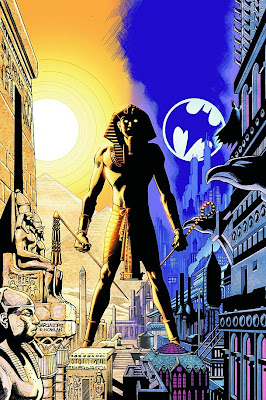 BATMAN CONFIDENTIAL #26
Written by Christina Weir & Nunzio DeFilippis
Art and cover by Jose Luis Garcia-Lopez & Kevin Nowlan
From the late ’60s Batman TV show comes King Tut making his first comic-book appearance in Gotham City ever in part 1 of a 3-part arc! A trail of murders involving museum executives and the mysterious riddles left behind lead Batman to suspect an old foe is back at work. But the Riddler is safely locked up – and not too happy that someone has stolen his M.O.!

No one’s put King Tut in a DCU comic book yet? Really? Huh. What about Egghead? I haven’t read any of Weir and DeFilippis’ comics for the Big Two, but I’m sure with Garcia-Lopez and Nowlan involved, this will at least look great. And I thought King Tut was totally bad-ass when I watched him on TV. Of course, I was like six-years-old and hadn’t yet realized the show wasn’t totally serious yet. 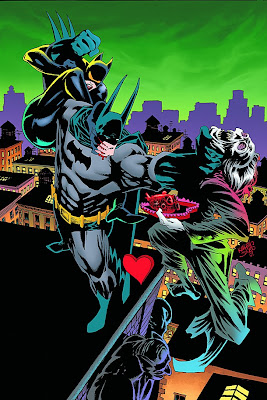 BATMAN: GOTHAM AFTER MIDNIGHT #10
Written by Steve Niles
Art and cover by Kelley Jones
Death strikes close to home for The Dark Knight as an important person in Bruce Wayne’s life dies at the hands of the Midnight Killer. But what’s Catwoman’s involvement? Will her heart belong to the murderous Midnight – both literally and figuratively – or can Batman stop this St. Valentine’s Day massacre before it’s too late?

There’s a good chance that I’m the only one in the world who cares, but I saw this cover image and got excited about seeing what Kelley Jones’ version of the newer Darwyn Cooke-designed Catwoman costume will look like. It definitely doesn’t play to his strengths, and I can’t recall seeing Jones draw an in-continuity Catwoman for much longer than an image or two.


BATMAN: HAUNTED GOTHAM TP
Written by Doug Moench
Art by Kelley Jones, John Beatty & Jason Moore
Cover by Kelley Jones
The team behind the popular BATMAN/DRACULA: RED RAIN, BLOODSTORM and CRIMSON MIST reunited in 2000 for the 4-issue miniseries HAUNTED GOTHAM, collected here for the first time. Cut off from the rest of the world, Bruce Wayne must prevail against a nightmare army of demonic villains, led by a patchwork Joker.

As a standalone Elseworlds story, this isn’t bad. The entire city of Gotham is haunted with ghosts—good and bad—and Batman is a human being contending against the forces of the supernatural at the behest of his ghost father. It’s enjoyable in the peculiar, acquired-taste way that most Moench-written projects and most Jones-drawn projects are, but I dug it.

In addition to supernaturalize-ing the regular Batman rogues, Moench and Jones create some of their own, original characters, like a snake man who leads an army of snakes against the city. I kinda liked that guy. 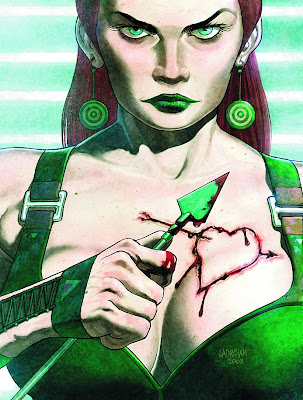 Hey look, blood and boobs on a DC cover! Again! 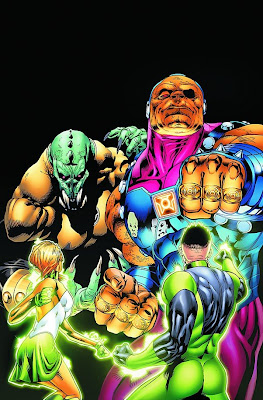 So DC is drawing covers just for Sally now, huh?


NIGHTWING #153
Written by Peter J. Tomasi
Art and cover by Don Kramer & Jay Leisten
It’s the fateful, final “Batman” Last Rites” issue featuring an “Origins and Omens” backup! As Robin, Dick Grayson fought alongside Batman as part of the dynamic duo, the greatest crime-fighting team in history. As Nightwing, he teamed up with his peers to combat injustice in the Titans and the Outsiders. Now, Dick Grayson faces the most important battle of his life. Batman is dead. The Mantle of the Bat must be passed, but it will require all of Dick’s training and skills to carry out the last wishes of Bruce Wayne and protect Gotham City. Will it be enough to protect himself from the dangers that await him? Or is this the last the world will see of Nightwing?
FINAL ISSUE

In a world in which “Prodigal” never existed, I think the prospect of Dick Grayson becoming Batman would have been tremendously excited. As it is though, I find myself wondering how derivative the new direction of Batman will ultimately be.

If Nightwing does quit being Nightwing, I wonder if it will before this Nightwing meets the new Kandorian Nightwing popping up in the Super-books…?

I am going to buy these.


SUPERMAN: THE COMING OF ATLAS HC
Written by James Robinson and Jack Kirby
Art by Renado Guedes, Jack Kirby, Jose Wilson
Magalhaes and D. Bruce Berry
Cover by Alex Ross
Titans clash in this first hardcover collection of SUPERMAN tales from fan-favorite writer James Robinson (STARMAN)!
Featuring SUPERMAN #677-680, this is the battle to end all others as Superman faces off with Atlas, lost god of myth. And when Atlas stakes a claim on Metropolis, it’s up to Superman and Krypto to take Atlas down.
As a bonus, this collection also includes FIRST ISSUE SPECIAL #1, the 1975 tale by Jack “King” Kirby that introduced Atlas!


REIGN IN HELL #8
Written by Keith Giffen
Art by Tom Derenick & Bill Sienkiewicz
Cover by Justiniano
The bloody denouement arrives as the heir to the throne of Hell is chosen! Will Blue Devil regain his soul? Will there be a Hell left once Lobo’s had his way? Will Dr. Occult convince his lost love to come home? Find the answers here!
On sale February 25 • 8 of 8

THE WAR THAT TIME FORGOT #10
Written by Bruce Jones
Art by Graham Nolan & Dan Green
Cover by Justiniano
The secret’s out! The puzzling mystery of the island is revealed...but has it come too late for those who hoped for a life beyond its shores? Get set for some of the strangest, most explosive TNT clashes between men and beasts ever chronicled!
On sale February 25 • 10 of 12

TANGENT: SUPERMAN’S REIGN #12
Written by Dan Jurgens
Art by Carlos Magno & Julio Ferreira
Cover by Dan Jurgens & Will Conrad
The duel universe-spanning epic concludes as the Justice League of America attempts to rally against Tangent Superman. It all comes down to one last-ditch effort as all hope remains with one lone individual. Who’s this being, and what’s their relationship to the Man of Telekinesis? And what will become of the Tangent Universe?

Damn, these are some long-ass miniseries, aren’t they?


SIMON DARK #17
Written by Steve Niles
Art and cover by Scott Hampton
Tragedy tears apart Simon Dark’s patchwork life! There aren’t many people who’ve gotten close to Simon Dark, but the events of this issue will leave them all hurt...or worse! Can Simon’s fragile world ever be stitched back together?

Every time a new round of solicits comes out, I expect to see a “FINAL ISSUE” attached to the end of the Simon Dark one, and it’s never there. So congratulations to Niles and Hampton—they’ve kept this thing going a lot longer that I expected was possible. 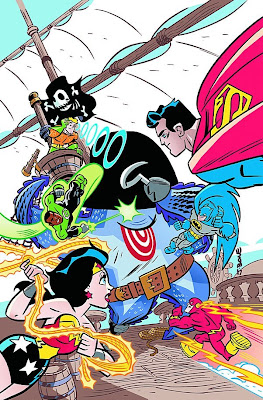 I don't have anything to add really. This image speaks for itself, and does so quite eloquently.
Posted by Caleb at 2:20 PM

So DC is drawing covers just for Sally now, huh?

That's exactly what I thought when I saw that image.

I love Showcase and Essentials, and I will buy/read stuff I'd normally have no interest in because they're collected, cheap, and usually feature a good story or three. If Marvel can "Essential" 1980s Silver Surfer, DC can Showcase the Bwa-ha-ha League.

Interesting to me how little I care about what DC is publishing these days.

And I have to be honest, I love Batman Year 100 and Pope's other stuff, but 100% left me kinda cold. I felt like the theme of the future was just pasted on.

But his Batman stuff? DAMN!

Wait, wait, wait. LOBO is in "Reign in Hell"? Lobo + Giffen? I'm almost tempted to try the series out again...

Showcase Presents Ambush Bug is beautiful, isn't it? I own everything in it except for one of the Action Comics back-ups, but still - I'm so pleased it will soon exist.

Assuming it doesn't go the way of Captain Carrot and Suicide Squad. Although, the fact that they're doing another 80s-era Showcase Presents volume gives me new hope that those might actually be released at some point.

Re: “Whatever Happened to the Emerald Gladiator?”

Why would Johns be the choice to write Alan Moore wankery on the Hulk?

Why yes, DC IS drawing Green Lantern Corp covers JUST for ME! That is one heck of a fabulous beind on Yat! It...it's as though they read my mind!

I rather like the Andy Kubert cover for Batman. I don't understand his lateness problems, back in the day, he seemed to crank out X-Men stuff by the bucketfull without any problems.

I may have to pick up Batman Confidential JUST for King Tut. He was my favorite villain on the old '60's show...next to the Riddler that is.

I've been actually rather enjoying Tangent. At least it's a chance to see John Stewart. It has gone on for quite a while however. I'm really hoping that the one character who holds the key to everything is the geeky version of Guy Gardner. Teehee!

Starro joined the Secret Society of Pirates?
How do they come up with this awesomeness?