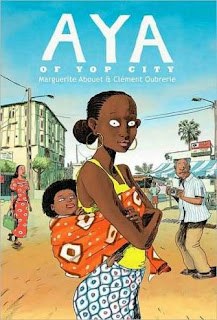 Now I kinda wish I wouldn’t have been reading Marguerite Abouet and Clement Oubrerie’s Aya comics as they were coming out, but had waited until publisher Drawn and Quarterly had stockpiled several volumes of them. Not because I didn’t enjoy reading both in the months after they were first released, but because the new-ish, second volume—Aya of Yop City—ended with such a fantastic cliffhanger that I wanted to rush right out and buy and read the third volume as soon as I finished it and, well, I can’t. It doesn’t exist yet. (At least, not in English).

I guess it’s kind of like the difference between reading a manga series after it’s all wrapped up, and each and every volume is ready and waiting on the shelves of your local library or bookstore for whenever you’re ready for them, and reading a series as it’s being released, and there are long months between each. I prefer the former, for the sake of instant gratification, rather than the latter, despite liking to be up on everything.

The reading of manga is actually a pretty good comparison to the experience of reading Aya. Abouet and Oubrerie’s recreation of late seventies life in Yop City, on Africa’s Ivory Coast, offers the same sort of pleasant crash-course in a heretofore unknown (um, to me) culture and setting, and there’s an exhilarating sense of discovery that accompanies the story. Learning the Ivorian slang, reading the exclamatory exclamations at the ends of sentences, and generally being initiated into the people, places and customs of Aya’s friends and family. It’s the same feeling I got when I first started reading manga, and was learning the differences in the honorifics and peculiarities of the Japanese school system, diet and domestic life.

What I’m trying, and probably not succeeding at, describing is a very vague part of the reading experience of great comics set in cultures quite foreign to my own; something that happens somewhere in the back of my head while I’m reading and that I don’t even notice until a week or two later when I’m sitting in front of my laptop and trying to explain why I not only enjoyed this comic book, but was actually excited about it.

This subtle to the point where its practically subliminal cultural education isn’t the reason I dug Aya of Yop City, but part of why I enjoyed it so much, and in that way that I did.

The other, more important part, is obvious: It’s really quite good.

The novelty of a comic—or work of pop culture of any kind, really—set in Africa that doesn’t have anything to do with AIDS, genocide, war or safari animals has worn off, and I went into this volume expecting another light, breezy dramedy involving a large, multi-generational cast revolving around the title character, who seems to witness more of the conflicts and comedy from over the other characters’ shoulders than be terribly involved in them herself.

It’s what I got, but, like most serial works of this nature, the more time you spend with the characters, the more you get to know them, the more you enjoy their presence: It’s not only about how well Abouet writes them or how good Oubrerie draws them, the strength of the individual gag or the surprise of a plot twist, but simply how much fun it is to hang out with Aya and company.

Aya’s friend Adjoua has had a peculiar-looking baby, and she claims skinny, shiftless Moussa as the father, mainly because Moussa’s father is so well off. The new grandfather is skeptical, however, forcing Adjoua’s father Hyacinte to search desperately throughout his family and, eventually, the entire countryside, for one person anywhere who looks anyting like Adjoua’s baby to prove that it got its looks from her family.

Aya’s other friend, Bintou, has meanwhile taken up with a new lover who seems way too good to be true, for the perhaps obvious reason that he is.

And while Aya herself doesn’t seem to get in trouble like her friends, her household has its share of it, as this volume slowly builds up to that last page I mentioned, a killer splash-page reveal that makes me laugh every time I see it: The look on Ignace’s face just cracks me up.

Author Abouet, whose first graphic novel was the first volume of Aya, grew up in the real world version of the setting of her story, though she left the Ivory Coast for France by the age of 12. That familiarity, despite how far removed she is from it, no doubt heavily informs her eye for details, but its her character creation and storytelling that make the book such a great read.

That, and Oubrerie’s art, which reminds me somewhat of Joann Sfar’s Rabbi’s Cat style. Oubrerie’s line can bet somewhat sketchy and jittery, but it doesn’t look anxious or nervous so much as energetic. His characters can be quite simple and cartoony looking, but he wrings so much individuality out of them that its truly remarkable how distinct each member of the cast looks, given it’s sprawling size (about four families comprise the “main” characters).

If you haven’t read Aya yet, then I’d highly recommend both it and Aya of Yop City. But I totally understand if you want to hold off for a year or so until a third volume appears—then you won’t have to deal with the frustration of knowing you’re in for a good long wait before you discover how Ignace navigates the straits he’s in on that last page.
Posted by Caleb at 4:54 PM

I've really enjoyed both Aya books, but honestly, I felt jacked when I got to the end of Yop City and nothing of consequence was resolved.

Call me old fashioned, I like each volume to have some significance unto itself, even if some storylines carry over.

As you said, it's a lot like the pleasurable disjunction of reading manga: you need to play along, don't sweat the details and let the context explain things. This kind of book makes for really rich re-reading material. I started with the 2nd book (a gift) & must backtrack to the first - yet another reading strategy to create happy disjunction.
At least it reads right to left!