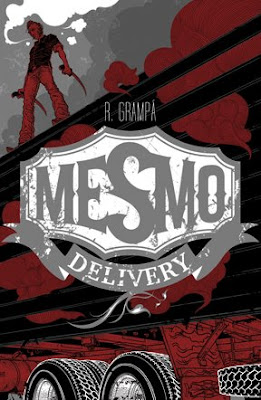 Now this, this is a comic book.

Mesmo Delivery (AdHouse Books) is the first solo comics work from Rafael Grampá, probably best known in comics circles for being one-fifth of the artists responsible for 2008 Eisner-winning anthology 5 (The other four? Gabriel Bá, Becky Cloonan, Fabio Moon, Vasilis Lolos. That’s some good company to be in). It’s also a perfect example of the sort of a comic book story that could only be told this way in this particular medium, an often nigh ineffable quality I personally consider to be one of the most important in a great comic.

Sure, the plot, the dialogue and some of the staging could have occurred in a filmed media I suppose, but not with the impact it does here; nor could prose words have captured the sudden shock a reader gets when, say, seeing page 37.

Grampá has worked in animation and advertising, and it certainly shows in his art.

It’s extremely well-drawn, with big, ugly, cartoon character low-lives rendered with tiny little lines on their skin, giving the men the appearance of the texture of a hairbrush, and the women a disconcertingly reptilian look.

The world he draws is full of little observant details, giving the inside of a truck cab, a dingy office, a truck stop bar and a parking lot senses of place, anchoring them to reality, but not cluttering them up or making them seem mundane.

Lettering—which is credited to a Rafa Coutinho, although much of it seems to have been drawn into the art—is used as a design element and a directional eye-guide, rather than simply communicating narrative information, and much of it is leant to logos for products you can’t really buy.

I’m not really doing it any justice. If you click through the link above, you’ll find an online preview of the first few pages of the book, which will give you some sense of Grampá’s artwork, although the previewed pages are among the more static; it gets unbelievably action-packed later on.

So, the story. It has more than a few surprises, and it’s hard to discuss that story without revealing and ruining a couple of them. I alluded to page 37, where you’ll see someone familiar looking who doesn’t at first seem to have anything to do with the rest of the book; there are also a few unexpected reversals, where conflicts are won (even if only temporarily) by the people you least expect to win them.

It’s also hard to discuss that story because several elements are left purposely quite vague, particularly the nature of Mesmo Delivery (Mesmo means “even” in Portuguese, as far as the Internet can tell me), the unseen boss character who runs it and what exactly is up with the man who’s shown standing atop the trailer on the cover, breathing the stylized cloud of smoke and gripping two wicked-looking daggers.

It opens with a visual overture of sorts, with a crow or raven gripping a human tooth in its beak, and we see the “Mesmo Delivery” logo on the side of a truck. Rufo, a big, burly ex-boxer is driving the truck, and a smaller, older looking man, who assures Rufo he would have been a better Elvis than Elvis, is riding shotgun.

A stop at a gas station/roadside bar puts Rufo in conflict with some locals, who make fun of his choice in drink (milk) and then bet he can’t knock down one of them, a fighter with an…odd right hand.

One of them eventually looks in trailer of the truck, something that Rufo had to sign a contracting stating he himself would never do, and then, well, all hell breaks loose. And it is a rather nasty, extremely gory sort of hell, but good God is it beautifully illustrated. The amount and nature of the violence may turn some potential readers off—for example, we see a screaming man’s head severed and go flying off from the point of view of inside his screaming mouth—but regardless of your taste for blood, it’s a beautifully orchestrated scene.

I’ve read it three times now, and while the last two readings were quite different from the first, I’m still not entirely sure what’s what regarding the titular trucking line. I assume that’s part of the Grampá’s plan; the mystery surrounding the proceedings make them all the more intriguing.
Posted by Caleb at 5:56 PM

Caleb, "mesmo", can mean other things, such as "the same" or "really":

I still haven't figured out exactly what that means in the context of this comic, but I agree with you it's a totally awesome comic. I was really impressed with how Grampá took full advantage of the storytelling possibilities of the medium, and how the whole thing just sucks you in and totally *sells* the situations you're seeing.

Oh, and the guys on "5" not only were nominated but won the Eisner for best anthology!

Oh how I envy the bilingual.

NRAMA: OK, I'm a little confused but that's okay. What does 'Mesmo Delivery' stand for?

RG: In Portuguese, 'mesmo' stands for 'the same' or something that was previously mentioned. There is a sign in every single elevator in Brazil that says: 'Before you take this elevator, be sure that the same is at this floor" .This sentence sounds too awkward in Portuguese and I kept making fun of whom this mysterious "Same" - or Mesmo - could be. When I needed a name for the HQ carrier, the first thing that came to my mind was the mysterious Mesmo. I, then, thought of 'Mesmo Delivery' and liked the name very much, deciding to keep it. But going deep into its meaning, Mesmo Delivery stands for the beginning, my commitment to comics, the start of my trying to develop narrative, script and drawing techniques. I have always had the idea of mixing all my passions with the biggest one which is comic books and I think that Mesmo Delivery is a brief sample of what I am trying to reach and want to do with comics.