Review: The Dresden Files: Welcome to the Jungle 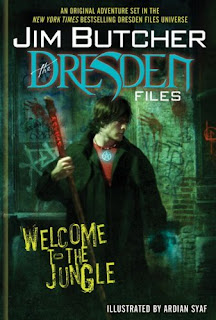 As a reader of and writer-about comic books, I found The Dresden Files: Welcome to the Jungle (Del Rey/Dabel Brothers) to be a clearly, exceptionally, even remarkably awful comic book.

Given that it’s based on a rather popular series of urban fantasy novels that have themselves spawned a Sci-Fi Channel television series, I might also think of the hardcover collection of this four-part Dabel Brothers-produced comic as depressingly bad, given that it seems likely to pull in readers new to the comic medium (and just as likely to repulse them from comics when they discover how bad it is).

But unlike similarly bad comics based on a popular urban fantasy novel series, this one is apparently exactly what Dresden Files creator Jim Butcher had in mind when he thought of his character starring in a comic book, as Butcher himself wrote the script for the series.

That in itself is admirable, and I imagine if I were a Dresden Files fan, it would be a big selling point to me (I’m not; this is my first exposure to the character in any medium), as would the fact that this is an original story by Butcher, rather than an adaptation of the novels (I’ve never been a fan of comics adaptations of pre-existing work, unless the artist has such a unique style and such a powerful ability that their involvement has a transformative effect on the story).

As a neophyte to the characters and world of Dresden Files, I can speak only to what I encountered between the covers of this graphic novel, and I didn’t see much of anything I liked.

Protagonist Harry Dresden is a fairly generic private eye type of character. He sports perpetual stubble, he rubs cops the wrong way, he’s charming and sarcastic, he’s down on his luck. He is a wizard though, complete with a staff and Latin-esque* magic words, which made him seem like a grown up Harry Potter who had found work in one of Dick Wolf’s police procedurals.

The cops call him in when they find themselves faced with some kind of magical crime, though he’s regarded by some of them with distaste, including one character with the most unlikely bald spot I’ve ever seen depicted in any medium.

Dresden works in Chicago, which doesn’t seem like the sort of city one would expect to encounter a whole lot of demons and supernatural agents in, but location hardly matters; the only reason I know this is set in Chicago is that it’s mentioned a few times. None of the city’s geography or personality creep in to flavor the story at all.

This seems to be Butcher’s first comics work, and while it’s fairly uninspired, he doesn’t write like an amateur. He’s certainly in better shape than fellow novelists-turned-comics writers like, say, Brad Meltzer or Jodi Picoult were after their first story arcs.

Butcher’s characters are all extremely generic, and don’t seem to develop at all through the course of the story, but then, that’s the nature of such serial entertainment, be it novels, TV or comics—the concept is king, followed in importance by execution, and the stories are what happens to allow the concept to live on for another novel, show or issue.

Butcher manages not to over-write or get too wordy, sacrificing the use of images and falling back on the words. He even ends each chapter with a cliffhanger, and begins the next with a on-the-fly recap, something that is unnecessary now that the story is collected to be read as a graphic novel, but would have made the individual issues read better.

Pencil artist Ardian Syaf and the team of four inkers who handle the art, however, leave quite a bit to be desired. The work is extremely generic, superhero comic style; think an especially poorly-illustrated modern WildStorm series, or a slightly more amateurish version of one of DC’s current ugly titles (JLoA, Batman, Teen Titans, etc).

The character designs are unremarkable, odd given the fact that they already exist in other media. I already mentioned the bizarre hair of Sgt. Carmichael, which is longish and shaggy on the sides and bangs, but is completely bald on the top, as if he filled a small bowl with hair remover and turned it upside down on his head.

The title character looks like a nerd’s idea of what might be cool. With his pentagram necklace, long black coat, unshaven face and walking stick wizard’s staff, Dresden looks like a more physically fit version of the guys I would see in all-night restaurants playing role playing games. (Interestingly, he looks much different when Chris McGrath draws him for the covers, including for the image above, in which he looks ten years younger, has longer hair and is clean-shaven with a sharper jaw).

There’s nothing about the art that takes advantage of the medium or seeks to distinguish itself in anyway, begging the question of why this story exists as a comics story, beyond the obvious, depressing reason (because Dabel Brothers, Del Rey, Butcher and company thought it would make some money as such). Worse, it’s rather amateurishly rendered, with panel-to-panel continuity falling apart, Dresden’s car appearing much bigger inside than it is when seen from outside (or is that a magic VW bug?), et cetera.

It’s kind of a shame Butcher and the Dabel Brothers didn’t shop more seriously for a more suitable artist, as there are some potentially interesting visuals to the plot.

An ancient hag is posing as a zoo employee, and is able to possess various zoo animals to commit murders, as part of a ritual to become an unstoppable goddess. Syaf and company draw perfectly decent big cats and gorillas, but when you think about what someone like, say, Kelley Jones or Mike Mignola or Richard Corben can do to make a tiger or gorilla look scary and cool, well, Welcome to the Jungle seems even more visually impotent.

*Or is that actual Latin? I took Spanish in high school.
Posted by Caleb at 7:00 PM

My daughters and I absolutely loved the show. I wish there were more episodes of it. I read one of the books, after having watched the show, and thought the show was actually much better. The novel was ok, but mostly average, and the changes that were made for tv were actually improvements in my opinion.

I like the idea, and the character a lot, though, and am sorry to hear that the comic isn't better.

For what it's worth, the books (once you get to the third-third of the second one, since it took him a while to get it down to a science) are an absolute load of fun and really blew the TV show out of the water. I don't think it translated too well into the comic though.

Butcher writes these amazing third acts where he gets the protagonist in incredible amounts of hot water and then figures out how to get him out. I'm not sure I've ever seen another writer consistently do it as well. Honestly, I know dozens of people who have read the books and not one found them less than great.

He also has a really fun spider-man novel where he does a lot of good character development with the Rhino.

I spoke to him at the NYCC a couple of years back before any comics work was announced and he professed that he wasn't sure about the medium and having an artist translate his work. Maybe it was just a bumpy road. I don't know.

He's a guy who found his initial success almost completely through word of mouth, and there's definitely good reason for that.