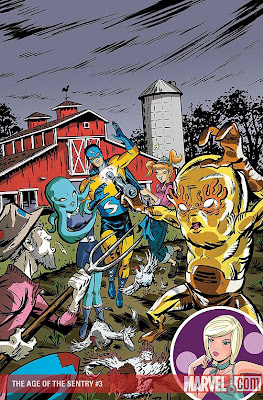 The Age of The Sentry #3 (Marvel Comics) What a weird Wednesday in Sentry comics. He briefly appears in Avengers/Invaders #6, demonstrating what’s so unlikable about the character. His appearance there is his typical one, in which the writers address him as a story problem to be considered and overcome, something to be pushed out of the way so they can just get on with telling a story that doesn’t involve someone in Superman’s weight class mucking up an otherwise perfectly Marvellian Marvel story. (In this particular appearance, he fights the original Human Torch for six panels, before getting upset and flying away crying. Which is all he ever does in Avengers comics).

And, of course, he appears here, in Jeff Parker, Paul Tobin and company’s gentle parody/love letter to Silver Age Superman comics. This being the third-issue and mid-point of the miniseries, I assume anyone who’s interested in this series is already reading it (But if you’re a wait-for-the-trader, wondering if this is worth the waiting, I say thee yay. Er, sorry; weeks where I read more Marvel than DC does that to me).

The cover pretty much tells you all you need to know (even the above image, which is missing the jokey dialogue and blurbs): You’ve got The Setnry being fought over by a tentacled space alien gal in go-go boots and a farmer’s daughter, while a pitchfork and ray gun are waved in his general direction, you’ve got Manoo and, in the corner, you’ve got Millie the Model.

The lead story, “Sentry Vs. Mountain Man,” is Parker’s, and is drawn by Nick Dragotta and Gary Martin. Sentry travels to the Ozarks, where he does battle with a super-powered hillbilly and, despite the fact that he’s bulletproof, finds himself in a shotgun wedding to the fetching Ellie Easter. He’s able get out of it, and turn the hillbillies into the Hillbillionaires in a way that only The Sentry could. Well, only The Sentry and Superman. (And maybe Captain Marvel).

Then, in “She Loved a Monster!!”, Tobin joins forces with Colleen Coover for a story in which The Sentry seeks out Millie to advise Manoo on how to impress a lady. There’s Coover drawing the Marvel U, a Fin Fang Foom cameo, and some punching, behind a fake cover for Millie The Model Super-Size Special!, which blurbs “The Sentry becomes a Super-Seamstress to sew a dress of a million exploding colors!” Which never actually happens. Still! Tobin and Coover in a Millie/Manoo team-up! What the hell else do you want? DeCarlo art?

Yes, that would have made this perfect, but that’s sadly impossible at the moment. And Coover’s not exactly shabby herself.


Fantastic Four: True Story #4 (Marvel) This was actually realeased last week, but my shop was sold out by the time I got there, so I missed out. Does that mean this series has been really popular? Or only that my particular shop didn’t order all that many issues? I don’t know. But I do know that this series has been a lot of fun, even if writer Paul Cornell often seemed to lose control of the weirdest elements of his plot and his meta-metafictional gags and plot points as the story wore on.

The premise and concept—in which FF villain Nightmare invades the realm of fiction to attack Earth through it, and the FF must journey there and ally themselves with characters as diverse as Dante and the casts of Sense and Sensibility and the Wind in the Willows to stop him—was certainly promising, but the final execution was in now way a great comic book. But it was certainly great fun while it lasted.

In this final installment, Reed Richards kicks Nightmare’s ass “ontologically, philosophically and literarily,” Johnny Storm’s bad tastes save the day, Indiana Jones, Daniel Craig’s Bond, Michael Bay’s Transformers and the gals from Bring It On join the fray, and it ends as happily as any story can—with everyone gathering around the TV to watch the live-action Josie and the Pussycats. 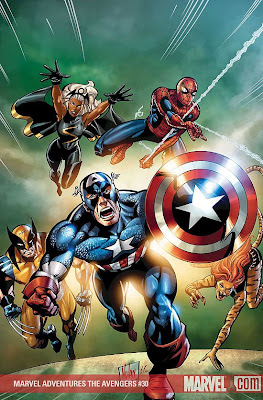 Marvel Adventures Avengers #30 (Marvel) This Jeff Parker-less issue of MAA introduces Tigra into the fold. She’s a private investigator hired to spy on the Avengers, and the issue splits its time between scenes of her secretly trailing characters (which must be difficult to do when you have orange skin and disguise yourself in a turn-of-the-20th-century dress and hat) while discussing them in striped narration boxes, and the Avengers battling The Griffin, a Marvel villain whose crazy character design I’ve never quite understood (Dude looks nothing like a griffin, but a lot like a manticore). It’s a lot stronger on characterization and a lot lighter on zaniness than usual, but still a pretty decent read, and it’s nice to see a comic that ends with a superheroine jumping up and saying “Yay!” once in a while.

The computer coloring on this book is just completely out of control, though. I didn’t even recognize EDILW favorite Graham Nolan’s art under all those textured colors on the cover until I just now spotted his signature, and I’m not sure why we need to see the sun glinting off of The Griffin’s golden, shampoo commercial-style hair or why New York City pigeons need to shine like polished gun metal.

By the way, did you know The Griffin could control birds? I didn’t know that. It is a fantastic superpower, the ability to control birds. Especially if you’re super-strong, can fly, and have wicked teeth, claws and a prehensile tail. How often would you even need to summon a bird to attack your foes? 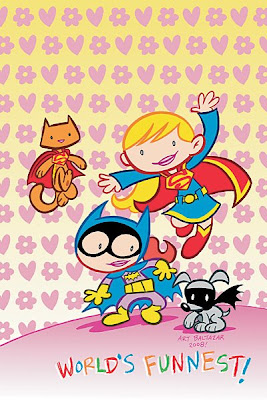 Tiny Titans #10 (DC Comics) This may actually be the girliest comic book I’ve ever read. I’m not complaining, mind you; many of my favorite DC characters appear in this issue—Beppo! Comet! Streaky! Krypto! Ace! Bizarro!—which is differentiated from previous issues of the series by its lack of Titans (Supergirl and Batgirl are the only tiny characters in it) and the fact that it’s one big, long story, rather than a series of shorter gag strips.

The plot? Batgirl and Supergirl go to play with the Titans, but forget to feed Ace the Bat-Puppy and Streaky the Super-Kitten. They can’t find the Titans, so the two girls decide to have a tea part instead. Meanwhile, the World’s, um, Furriest (…?) team-up to find their forgetful mistresses and get fed. Hilarity, cuteness and girliness ensue.


Trinity #25 (DC) Okay, now it just seems like writer Kurt Busiek is trying to win a bet against someone who said he couldn’t possibly write a series—even a 52-issue series—that included every single DC character ever in a logical(-ish) fashion. How else to explain the presence of Space Ranger and the pre-Neil Gaiman Black Orchid alongside Vibe and Fire in this altered world’s version of the Justice League?
Posted by Caleb at 2:48 PM

Tobin & Coover are my favorite husband/wife team in comics. I'd love to see them do more together. Say Marvel Adventures Avengers?

My 3 year old daughter agrees with your assessment of Tiny Titans #10. She thought it was about perfect.