So I understand the Obamas are looking for a new dog...

Provided they don't have their hearts set on one that's both three-dimensional and, what's the word, real, then I might have a few suggestions...

Positives: Has all of Superman's many powers, only scaled to dog proportions, making him an ideal guard dog, watch dog, bloodhound and, should the need arise, attack dog.

Negatives: Would be difficult for human owners or handlers to take him for flies into outer space for exercise, or throw trees for him to fetch; could render the president's secret service detail superfluous, costing hundreds of them their jobs 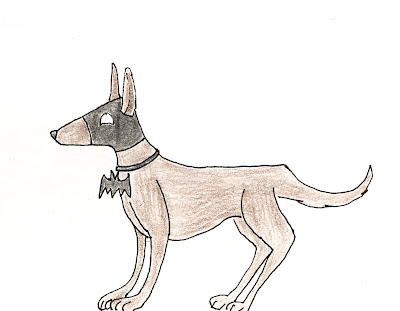 Positives: Batman would likely be willing to give Ace up, given how the Dark Knight tends to be ashamed of his occasional canine sidekick and is constantly trying to distance himself; an experienced tracker, Ace could help find people when the president can't (Look out, bin Laden!)

Negatives: Previous owner was kind of insane, so Ace might have a difficult time adjusting to living with a normal family that never wears capes or assaults anyone; background check could compromise Ace's secret identity, and thus that of Batman 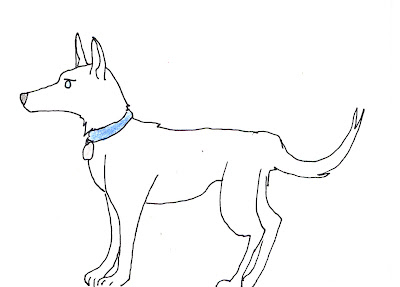 Current owner: A national treasure, Rex is owned by us all

Posiitves: A superb polymath and jack-of-all-trades, Rex's skill set and resume are unparalleled by any dog in history (and, come to think of it, few humans); in addition to being an excellent guard dog, he could easily fill in as a nanny for the girls, a secret service agent, White House chief of staff, Secretary of State, Vice President, or whatever Obama needs, really

Negatives: It might not do to have the First Dog showing up the president of the United States, and the fact that Rex would likely crush the back of al Qaeda, capture bin Laden, turn the economy around, solve the Israeli-Palestinian conflict, and invent a new source of cheap green energy within his first 100 days pretty much guarantees he'll be making Obama seem incompetent in comparison. 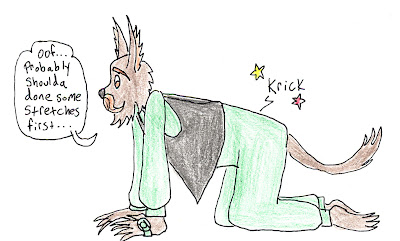 Current owners: The Guardians of the Galaxy

Positives: As a biped that can speak English and has opposable thumbs, G'Nort needs little in the way of care, and could be more useful than most first pets tend to be(he could feed himself, reach things on high shelves for the girls, etc.); his magic wishing ring is sometimes referred to as the "most powerful weapon in the universe" and can create any form of energy and matter in any amount, so long as he has the necessary willpower and imagination

Negatives: Past unsavory personal connections include Guy Gardner, The Scarlet Skier and Justice League Antarctica; allegiance to an immortal race of remote, controlling aliens may present the appearance of a conflict of interest; less intelligent than most species of earth dogs; a little of him goes a long way 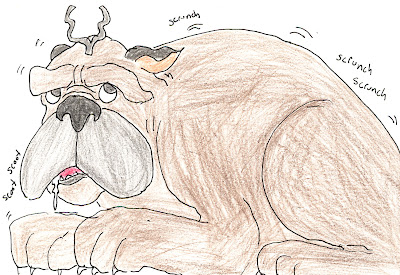 Positives: An exceptionally good dog for watching after the daugthers of the powerful; has experience working with ruling families; in addition to his great strength, his ability to teleport would be a useful form of transportation for the president; would be the first First Pet with a tuning fork in its head

Negatives: His great size may be problematic, potentially causing damage to the White House; the United States and the Inhumans have had several recent conflicts, and it may be impolitic to invite one of them to live in the White House; drools 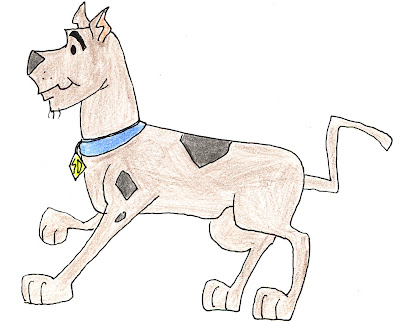 Positives: Master of disguise (for a dog); will do absolutely anything for a scooby snack; can talk (albeit with a speech impediment); friends with ghost-breakers Mystery Inc., who could prove useful in solving the mystery of the White House ghosts

Negatives: Extremely cowardly and somewhat paranoid (Get ready to hear “Sp-Sp-Spirit?!” every time you mention “The spirit of bipartisanship," Mr. President-Elect); needs held a lot; enormous appetite could put an unusual strain on the White House's pet food budget 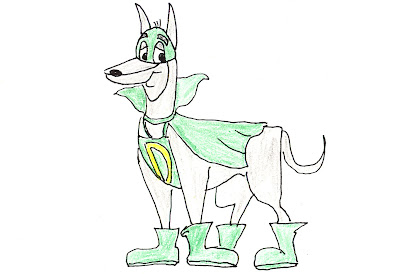 Positives: As his dog hair is synthetic, he's hypoallergenic; miraculous system of transistors allows him to telescope his limbs to great lengths and pull a gadget for almost any emergency out of his chest; worked for the first black mayor in a Saturday morning cartoon; former All-Star Laff-a-Lympic athlete; his partner Blue Falcon says he’s “as strong as a train…fearless, scare-less” and “a go-go dog person” (that’s a compliment, right?)

Negatives: An inveterate bumbler; kind of an idiot (for a talking android dog); has an extremely annoying laugh; has amassed a long list of goofy but potentially dangerous villains like Madame Apeface, Queen Hornet, The Red Vulture, The Glob, Fishface, Lowbrow, The Blimp and so on; according to his partner Blue Flacon he has “a so-so brain” and is “a little too careless” 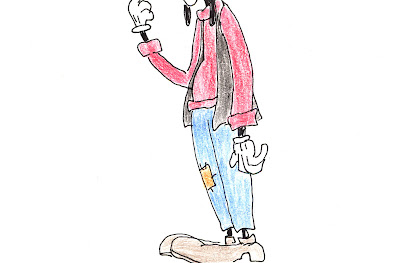 Positives: Has opposable thumbs and walks bipedally, so he can manipulate most basic tools; can dress, feed and walk himself; can speak (although mostly just says “Gorsh!” and “A-hyuck hyuck”) 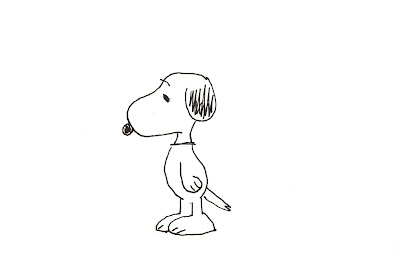 Positives: Good with kids; extremely affectionate toward little girls; quite a dancer; his Easter Beagle schtick would be a hit at White House lawn Easter egg rolls and hunts

Negatives: Prone to hallucination and elaborate delusions, has trouble separating his imagination from reality; ties to MetLife may present conflict of interest when the new president tackles health insurance reform
Posted by Caleb at 3:44 PM

Hmmm. Goofy's terrifying headlessness may make him unsuitable as a family pet, while Krypto, Ace or Rex may be better suited to cabinet positions than petdom. Also, how hypoallergennic is G'Nort, anyway? He looks like a breed that would shed on the furniture.

There's Cosmo, but he's Russian. Thats probably a security risk. And Ace II (Batman Beyond) might be a bit too aggressive. Plus he lives in the future...

K-9 would be a good choice, clean and loyal. Plus he'd defend the White House from Daleks and Cyber-men...

Now I can't stop imagining it.

I'd have thought Snoopy's military record made him a candidate for a cabinet post rather than First Pet. If getting shot down over Hanoi gave a candidate foreign policy credibility, what can we say about a candidate who flew over Ypres in a Sopwith Camel five decades earlier?

Lockjaw is too much of a political football. We as a nation need to come together, not be divided by debate on whether he's merely a dog exposed to the Terrigen Mists, or an actual mutated and deformed Inhuman.

Justin said...
This comment has been removed by the author.
10:49 PM

This post just kept going, didn't it? I expected Ace and Rex, but then G'nort, and Lockjaw, and the rest? Those were awesome.


Was Goofy's head hard to draw?


PS, as often as we've seen Obama making Superman jokes(and finding out he collected comics) I kind of expect to see Baby with a little red cape next Halloween.

Caleb, those were some great sketches. No, really, I'm quite impressed with your dogs.

Why these were lovely. I was especially appreciative of G'nort. Gosh, I love G'nort.

You also pretty much covered most of the cartoon/comic dogs. The only other one that I can think of, is Muttly, from Wacky Races, with Dick Dastardly. As a child, I used to try and laugh like him, and annoy my parents.

Pluto (ruins Christmas by chasing chipmunks around the tree)
Marmaduke (who?)
Odie (total drooling idiot from unfunny strip)
Thor (Manhunter's robot dog is just creepy)
The dog that serves as the host for Alien3 (dead)

My god, man. Stop making me crack up at work and having to cover it by pretending to cough.

Why can't the Obamas bring ALL of these dogs with them to the White House?

Dynomutt is most likely hypoallergenic, which the Obamas said is a must. :-)

Also, how hypoallergennic is G'Nort, anyway? He looks like a breed that would shed on the furniture.

Well, if he keeps his forcefield up, that should keep his hair to himself.

Yeah, I thought about him, but don't know enough about him. Marvel just doesn't have enough super-dogs...


Was Goofy's head hard to draw?

Yeah, I can't draw any of those Disney funny animals worth a damn, and never could. (I used to try and draw the ducks all the time when I was a kid, and could never get their stupid bills right) I figured Goofy might have trouble standing in the frame of the "photographer" anyway though...

Pluto (ruins Christmas by chasing chipmunks around the tree)

And also totally freaks me out. Why is Goofy sentient and a friend of Mickey's, while Mickey owns Pluto as a pet?! Why is Mickey, a mouse, scaled to Pluto as if Mickey were a human being?!

Owner: I would have to read the comic he's appearing in to know this.

Negatives: Not great with kids.