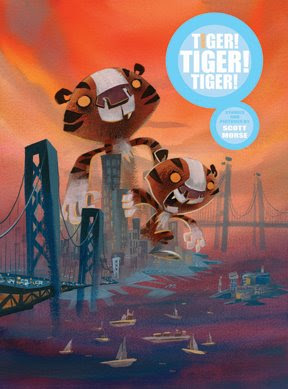 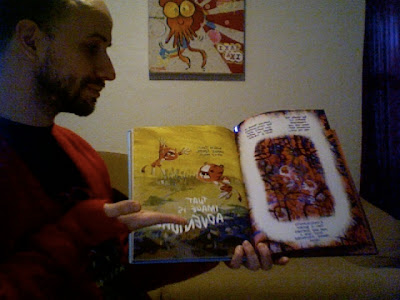 As you can see, it’s pretty large. My handy straightedge tells me it’s about a foot high, and nine inches wide, making it a foot-and-a-half wide when you open it up to read it. It’s a hardcover, which when coupled with the 48-page page length and Morse’s illustration style, makes it look and feel more like a children’s picture book than a comic book. The copy at AdHouse’s site refers to it as part of “a series of band desinee-style graphic works;” I’m afraid I don’t know what a “desinee” is, but perhaps that describes it better to those that do then what I wrote did.

It will run you $14.95, which is honestly a pretty scary price tag for such a quick read, particularly when that read isn’t all that great a one.

Perhaps perceived money-to-reading experience value isn’t necessarily the province of the critic, since, for the purposes of this particular post, I’m more interested in the content than the way it’s packaged and sold. I mention this only because the price point seems generated in large part by the particular format—big, hardcover, children’s book-like—and it’s a format that, while nice-looking, doesn’t necessarily do much to compliment the contents (The closest I can come up with for why Morse chose this presentation, beyond the obvious that it shows off his work better and looks gorgous, is that a children’s book like format reflects one of the two stories, which is about being a father to a young child).

Now, while I as a consumer might have had a hard time convincing myself to spend $15 on this while in my local comics shop one Wednesday (I received a review copy, so my example is purely theoretical here), I can certainly appreciate the look of the thing.

It is, as I said, gorgeous. The covers are all oranges, blues and blacks and whites, and I simply love the logo, with its built-in black stripes. I could stare at that thing for hours. (Well, minutes…my eyes start to hurt after staring at anything for too long).

On the cover, we see two bipedal tigers—a big one and a little one—reminiscent of Morse’s Southpaw tiger character. It’s a great image, and man, everything about the look of the book is great. I love the spine, the title page, the repeating tiger-heads on the inside covers…and, well, I assume you can already assume for yourself that the interior art is just as great.

Morse possesses a rare ability to fuse an extremely cartoony sense of design—his characters are cute, funny, sometimes silly, and able to express a single huge emotion per expression—with a fine-art sense of craft, and that fusion can often lead to a jarring tone designed to affect a reader in surprisingly emotional ways (Barfeoot Serpent being the best example of this I can think of at the moment).

For the most part, Morse eschews proper, traditionally defined panels throughout the book, although this is still sequential art/comics—the images sometimes fill a whole page, so that the page itself becomes the panel, and sometimes the bleed into one another, side by side, with the text leading a reader through it (This further suggests the story book vibe).

That text is devoted to telling two more or less individual stories that follow a sort of personal manifesto/mission statement that Morse makes (On the title page, he himself refers to this volume as “A collection of scattered thoughts and moments that somehow equal a whole”).

It’s a very personal work, dealing very personally with the way Morse sees himself as a person, a father, an artist and a storyteller, and the way he wants to communicate with and raise his son. That’s actually him and his son on the cover, although they are not actually tigers in real life.

Part of the opening section deals with how Morse arrived at that sort of avatar. “Now I know people that can draw. They can nail the character of a person in just a few lines. I can’t do that, at least not when trying to draw myself. Or people I know pretty well.”

Over the course of four pages or so, we see Morse’s drawing of himself as himself, before a few clouds of sketch book attempts to draw himself, as well as his wife and son as human beings.

“The Chinese call it a paper tiger, when a person puts on a false front of courage,” he writes. “My paper tiger’s different. Not false courage, but a sort of permission to reclaim a more innocent spirit.”

The tiger, as an animal, also sees the world in a particular way, in a way not unlike the way children see the world, and it’s a viewpoint Morse envies and tries to reclaim.

So anyway: The Morse family is a bunch of tigers. Which works out well, since Morse draws and paints such wonderful-looking bipedal tigers.

From there, the book is divided into roughly two sections, both dealing with autobiographical anecdotes that opens Morse up to self-exploration and philosophy or, less generously, navel-gazing and pseudo-intellectualism.

In the first, Scott Morse gets called for jury duty, and goes downtown to the courthouse for the process of jury selection, which involves a lot of waiting around, walking around, and sketching people. It’s not as boring as it might sound, given Morse’s art and the fact that he is, after all, a cute little tiger.

In the second, Morse takes his young son out for the day, and they go swimming and to the park. This story is exceptionally charming, because now we’ve got two little tiger-people, one of whom speaks in a funny little kid dialogue, like, “My’a go swim today” and “My’a made a big ol’ spwashes” and “My’a go to a park now.” And, at one point, Morse’s art gradually morphs in style when he feels an urge to protect his son; his tiger becoming more inky and Eastern-looking, as well as bigger and scarier.

Neither story on its own is particularly revelatory or even all that terribly entertaining, but taken together with Morse’s manifesto-like opening, and read in the context of Morse’s delicate, fussed over, style-conscious art style and his career as an extremely prolific cartoonist, it becomes an interesting look into the artist’s own outlook. It’s a portrait of the artist as a daddy tiger.

RELATED: I’d highly recommend checking out Morse’s website and blog. You’ll find a lot of fantastic stuff there, including his versions of characters like Usagi Yojimbo, Batgirl, Barack Obama, Wonder Woman (versus a tiger), Superman and Batman and Kirk andSpock and more, in addition to tons of drawings of his own characters and various animals.
Posted by Caleb at 6:26 PM

Yeah, I love Morse's art too, but the prices for his books are so ridiculously steep, especially for the amount of content provided. I usually only get Morse books if I can find them discounted (because no one else wanted to touch the high price tags either).

bandes dessines (or however it's spelt) is the french term for comics.
so like bd style means it's an oversized hardcover (or "album"), which is how french comics are usually released

Well, Tomorrowboy beat me to it, but I was going to mention the French comics thing too, so I'll just give the link to the relevant Wikipedia page. There you go. I hope you weren't just joking around, Caleb.

I hope you weren't just joking around, Caleb.

No, that was honestly the first I heard the term, and a brief search online for a definition didn't clear it up. So thanks to you both.