So the plan for tonight's post was an art-heavy one, but I was unable to get access to my scanner (and by "my" I mean "the one at the public library that I use"), so that post is now a no-go. As I don't want to let a day pass without any new content here, however, here are two reviews of recent Dark Horse Comics trade collections, which originally ran in Monday's Best Shots @ Newsarama column. (I don't know, do you guys even read Newsarama? How about Best Shots?). Fresher content tomorrow, and I'll probably do that art-heavy one on Monday, when people are actually reading again... 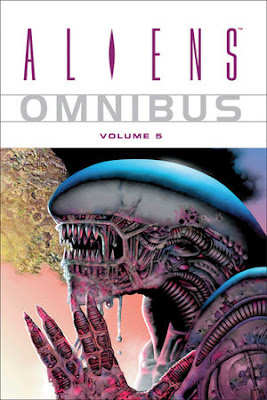 The latest volume collecting Dark Horse’s long-running series of series based on the 20th Century Fox aliens with a capital-A boasts the same amount of bang for your buck that all the company’s omnibus volumes do: $25 gets you some 371 full-color pages worth of comics.

This particular volume has the added bonus of being full of stories by people who you wouldn’t expect to be doing Aliens comics and, while the results aren’t always great comics, they are always interesting comics.

There’s a John Byrne story in which a ship bearing an Alien crash-lands on 1950s earth (It sucks, but still; John Byrne Aliens!), a story about religious fanaticism featuring art by horror master Richard Corben (That's a Corben alien on the cover above), a story by Jim Woodring, Justin Green and Francisco Solano Lopez, and another drawn by Guy Davis, and that’s only about half the book.

Regardless of how you feel about the films, or the seemingly endless life they’ve taken on in the comics (Personally? I kinda dig them), this particular trade is well worth at least a flip-through for almost any comics fan. Who can resist Guy Davis’ spindly, inky monsters, or Peter Bagge’s high-energy panels of a space marine going nuts with a machine gun, or Sergio Aragones’ downright cute Aliens? 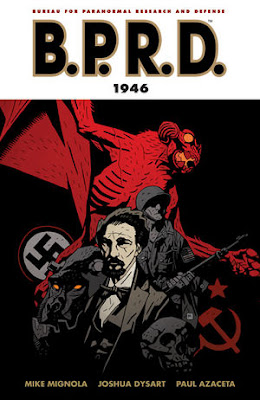 In B.P.R.D. 1946, the second world war has just ended, and the ruined Berlin is split in half, with the American and Russian armies co-occupying it, each side scrambling to scoop up everything of value before the other can get their hands on it. In Mike Mignola’s Hellboiverse, this includes not only Nazi treasures and rocket scientists, but also Hiter’s occult weapons and mechanically augmented ape warriors.

Back then, Hellboy is still just a boy, and the B.P.R.D. is similarly young, so when Trevor Bruttenholm arrives to start combing Berlin and cataloging Nazi occult programs, his only allies are the solders the U.S. military assigns him. His Russian rival is a creepy little doll-like girl, who is wise (and powerful) well beyond her years, and they slowly uncover something called “Project Vampir Sturm.”

Mike Mignola and co-writer Joshua Dysart tease the plot out so that the story starts off quite realistic, slowly becomes something of a mystery and then something of a ghost story that gets a little scarier with each page turn. Right up until the climax, at which point it explodes into the sort of full-on zany pulp horror readers have come to expect from Mignola’s Hellboy related efforts.

Tonally, the book is something of a labyrinth, with Mignola and Dysart leading readers from a more-or-less true war story into a Hellboy comic.

It’s taking a lot of willpower not to reveal the final application of Hitler’s vampire weapon, as it’s so giddily inspired, but discovering it as the protagonists do is one of the best parts of the book.

Mignola's contribution to the art stops at the cover, but Paul Azaceta’s art is perfectly suited to the story, as he excels in the bombed-out, post-apocalyptic period details and the more ethereal horror elements, and his aesthetic isn’t too far from that of Mignola’s own, nor other B.P.R.D. artists like Guy Davis.

All in all, it’s a remarkably new-reader friendly trade; you could quite easily get away without not knowing anything about Mignola’s ever-growing franchise and still enjoy this on its own merits.
Posted by Caleb at 6:40 PM

Labels: Aliens-with-a-capital-A, mignola, phoning it in

I love the Alien movie series (by which I mean, I'm the type who dwells on the good things about Alien: Resurrection). (Yes, there are).

I've never been able to get into the comics after the first couple of miniseries, both of which were worthy successors to Aliens, the movie.

I think my problem with the comics though (and with the two Alien/Predator movies) is that I'm as much of a Ripley fan as I am an "Aliens" fan.

Finally some reviews of stuff I don't feel the need to get. Because I've never been that big a fan of the Pred/Aliens comics 'verse. And I got the BPRD book in singles...