Thanksgiving isn’t that easy a holiday to comics-blog about. (Is that a verb? ‘Cause I’m using it like a verb). Unlike Christmas and Halloween, for which there are thousands upon thousands of comics that celebrate the commercialization of the celebration of the birth of Christ co-opting pagan winter tree-worship and the commercialization of pagan fall devil worship (respectively), there are relatively few comics that celebrate Thanksgiving.

So I was quite pleased to open a manila envelope from Columbus writer Tony Goins to find a slick new self-published book entitled Downs and find that the middle story in the mini-anthology was heavy on turkey content: 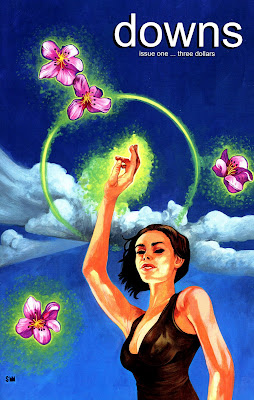 It opens with our pupil-less heroine Susan Downs, ancient Chinese agriculture deity Sovereign Millet, and a loosely organized band of hippies (one of whom is a ghost hippie), about to storm a poultry barn defended by gun-wielding rednecks. Why?

“First, I have to tell you about this turkey I had the other day…” Susan says, and we flash back to her in her kitchen, about to engage in her annual eating of meat, which leads to a kind of psychic freak-out brought on by the treatment of factory-farmed poultry. She can feel the birds' pain, and the horrible environment in which it was raised.

Oh, Susan has some sort of psychic-y powers…or super-ninja powers. Possibly of the Daredevil variety…? That’s referred to in the opening story of the collection, a five-page tale illustrated by Steven Russell Black (who also provided the cover image above) entitled “Dual Cultivation.” Basically, she can’t see with her eyes, but she can see with her mind.

Susan tracks the bird she tasted back to the West Virginia commune that was supposed to have sent her a free-range bird. Scant panels into her investigation, she’s brained from behind with a shovel, and wakes up tied up amid the poor penned-up, mistreated birds. 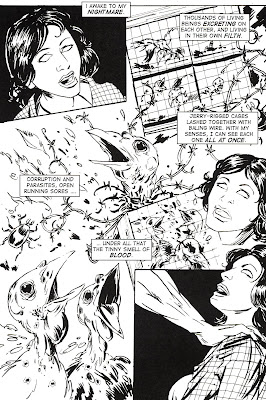 That’s when Sovereign Millet shows up. 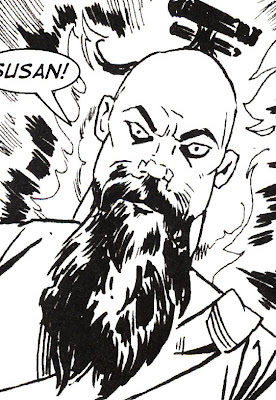 He unties Susan, introduces her to the ghost of Rainbow, one of the hippies who ran the free-range turkey farm, which some rival turkey-farmers violently took over, murdering him and kidnapping his fellow hippies in the process.

Which brings us back to the edge of the face-off the story started with. A violent splash-panel later—in which Susan and Millet bust out kung fu, and the hippies outnumber the guys with NRA hats—the bad guys’ leader Skykes makes a run for it. Susan follows, only to have him push a stack of turkey cages at her, threatening to bury her alive in caged turkeys.

Instead, she’s miraculously saved by turkeys. 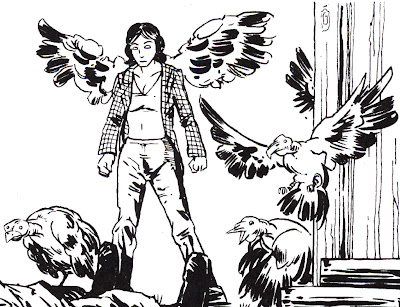 You just don’t see many panels like the one above that often.

And as for the man she was pursuing, well, he was found dead… 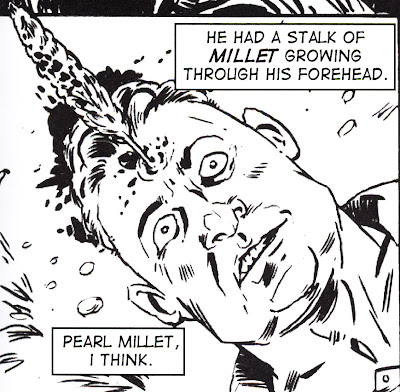 …a stalk of millet growing through his forehead.

The bad guys punished and the free-range turkey farm saved from the wicked factory-farming McCain/Palin voters, Susan and friends proceed to one of the twelve traditional happy endings:

Everyone gets together for a drum circle.

There’s one more story in the book, a nine-page one drawn by a “Matias T!” and called “The Girl Who Wasn’t There.” This one isn’t as clever or as fun as the turkey farm one, and is a more straightforward supernatural P.I. kind of tale, albeit one with a Tales From The Crypt sort of twist ending. It involves a health nut, a rock star and a necklace containing a vial of blood.

Taking all three stories together, it’s an awful lot for a single issue, and I suppose each of the stories could have benefited from more space to develop and breathe; while the first story works fine as a brief character introduction/prologue, the latter two seem a little abbreviated, with plot dominating the proceedings at the expense of character. Like, I’m still not sure what’s up with Susan and her eyes and mind powers and her time at an Eastern temple learning sex magic and kung fu, and maybe I’m not supposed to be—the cover does say “issue one,” after all—but I think I would have rather spent some more time with Susan and got a feel of who she is, where she’s at and what she’s all about, rather than getting so many stories in so small a space.

On the other hand, Goins pursuing this particular strategy does give us a good sense of the kind of scope of conflicts his heroine deals with, and the range of possibilities for future adventures: She knows Chinese deities on a first name basis, can feel the lives of turkeys through their meat, can see people’s souls and knows a bit about different kinds of magic.

The art is all quite solid, particularly for a self-published effort like this. Black’s cover image above speaks for itself; click through his name and you can see a lot more of his work. He’s great at single painted images, and while the short story he works on here doesn’t give a great sense of it, he’s skilled at sequentials as well.

I probably enjoyed Bowman’s work the best, although he did get the most space and the most to work with. “Matias T!” isn’t bad, and shows some aptitude for character design, but many of the panels seemed to contain dubious spatial relations between the subjects, and he (or she?) seemed less comfortable with backgrounds and settings, and the way these things related to the characters.

Anyway, that’s 24 pages of comics for $3, making this a much better comics-to-dollars value than, say, Secret Invasion or any of Marvel’s current miniseries. And since I failed to provide Goins with anything very blurb-worthy in this post, I’d just like to close by saying “Tony Goins is a thousand times the comics writer than Brad Meltzer is.” (But then, who isn’t?)

If Downs sounds like something you’d like to read for yourself, you can click to tonygoins.com for ordering information, webcomics and suchlike. Goins also contributes to the Panel group blog, which you can read here.
Posted by Caleb at 6:34 PM

I got a ham this year. My meat is happiest when it has wallowed in its own feces.

Hey! Thanks for the kind words.