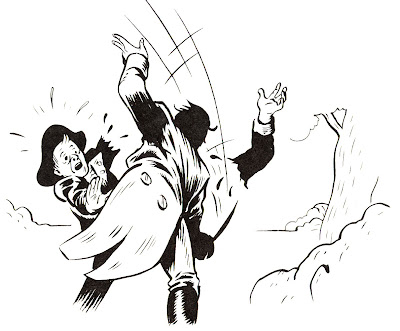 "One cold night during Burr's command at Valley Forge, a mutiny was stirring during roll call," Bill Kelter writes in Veeps: Profiles In Insignificance. "A soldier drew a pistol at an unsuspecting [Aaron] Burr and called to his fellow troops, 'Now is your time boys!' But Burr would brook no coup on his watch. He deftly drew his sword and, with one swipe, hacked off the man's arm."

Yes, Aaron Burr, the third vice president of the United States, perhaps most famous for totally killing a guy in a duel, also chopped off a man's arm. (See the above image, by Wayne Shellabarger, for how it might have went down).

That is but one of the many fun facts I learned while reading Kelter and Shellabarger's Veeps, a more than complete history of the vice presidency, including portraits of each and every veep, illustrations of their adventures like the one above, and chapters chronicling each man's accomplishments and significance, or lack thereof.

You can see about ordering a copy of the book from publisher Top Shelf here (And hey, if you do order it, don't forget about that sweet James Kochalka sale while you're there*), you can get plenty of preview action here, and you can read my interview with Kelter here.

*Since the last time I mentioned the Kochalka sale, I've read his all-ages graphic novel Pinky & Stinky, about two astronaut piglets set to explore Pluto and get sidetracked having an awesome adventure on the moon, and wanted to add that to my list of good Kochalka books that are on sale at Top Shelf at the moment.
Posted by Caleb at 2:23 PM