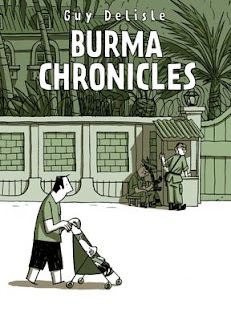 Thank God for Guy Delisle. When a deadly cyclone hit the country of Myanmar in the spring, killing over 80,000, leaving millions homeless and threatening a humanitarian crisis that could cost thousands and thousands more their lives, news of the small Asian nation began hitting the notoriously indifferent to the rest of the world American media.

For a while after the cyclone, I’d hear about Myanmar and it’s ridiculously reclusive and secretive military government on a daily basis, and was full of questions about this Asian nation I’d never really heard of (I’m somewhat ashamed to admit that I hadn’t even realized Burma’s name had been changed to Myanmar, so ill-informed was I).

Delisle has previously spent time in inhospitable places and turned out books on his experiences—Pyongyang: A Journey in North Korea and Shenzhen: A Travelogue From China—but gets access to Burma not because of who he is or what he’s done, but because of who his wife is and what she does. She’s an administrator for the French Doctors Without Borders, and, at book’s open, Delisle is watching Star Trek in Spanish (“El Star Trek! La ultima frontera…”) in anticipation of his little family being sent to Guatemala.

A phone call later, that’s been changed to Myanmar, a country whose language isn’t even an option on Delisle’s Star Trek DVD (I was comforted about my own ignorance about current Asian geography when I saw the Delisle avatar respond “Myanwhat?”)

So stay-at-home dad and work-from-home cartoonist Deslisle is stationed with his wife in the country formerly known (and sometimes still known, depending on whom you ask) as Burma, watching after his toddler son Louis, whom the cartoonist depicts as a little boy with a giant, bell-shaped head, capable of speaking in an idiosyncratic version of pig Latin (“Ada!” is dad, for example).

The book is structured as a series of short, episodic strips of various length, each covering a specific topic or event during Delisle and company’s 14 months or so in Burma.

If Delisle’s Chronicles were devoted to nothing more than educating the reader about Burma/Myanmar, it would no doubt be an effective work, but because of the way Delisle inserts himself into the book, it makes for a highly engaging read—one that’s as much a highly observational, occasionally profound family sitcom as it is a graphic novel about a country and culture.

History, politics, geography, social customs and everything a kid might need to do a report on the country is in here, but so too are anecdotes that reveal the nature of the country or the experience of being an outsider there. And then there are plenty of details that are just fun to read about, like the disparity between the way everyone treats little Louis versus how they treat his dad Guy.

If this is your first experience with the author, his style is stripped down to a sort of highly evocative minimalism. The characters are defined by a few simple geometric shapes, but the settings are representational (without ever looking fussy), and when Delisle slips into a more explanatory mode—when discussing what vehicles, buildings or pieces of equipment look like—his drawing will grow quite detailed. He’s spent a decade in animation, and it certainly shows in his command of the page, and the time and space the panels suggest upon it.

I know nothing about Delisle’s wife save what I’ve read here, and I certainly don’t know anything about his real-life relationship with her, and yet I still feel pretty confident in saying Delisle married well, if only because his wife’s job brings us books like Burma Chronicles.
Posted by Caleb at 5:58 PM