Politics aside, this isn't a very good cartoon (The politics are pretty dumb though). 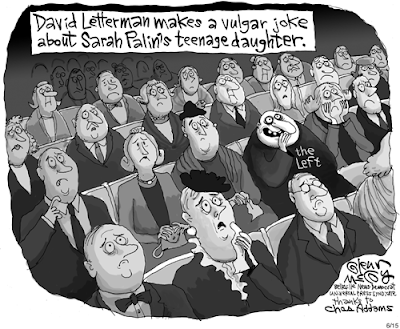 I apologize in advance for how dated this discussion probably is. I'm not exactly sure when the above cartoon by Glenn McCoy ran, but from the date in the corner of the above image, it looks like it's from June 15, almost two weeks ago. Certainly based on the subject matter, it's a good half-dozen or so news cycles ago. But I didn't see it until it popped up in Josh Fruhlinger's "Cartoon Violence" column Wonkette today.

So, does McCoy's cartoon up there look familiar to you at all? If so, you've probably seen the classic Charles Addams cartoon it's riffing on, from a 1946 issue of The New Yorker: 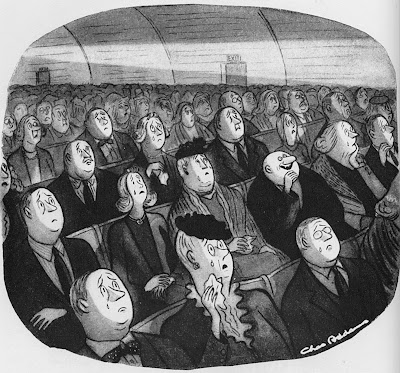 I don't begrudge McCoy's use of the Addams cartoon as inspiration, even if McCoy is clearly no Addams (A statement I doubt McCoy himself would argue with). I'm sure it was a fun piece for McCoy to work on, to break out a collection of Addams cartoons he no doubt has on his shelf and spend a few hours studying it and replicating the characters in his own style. I can appreciate that, just as I appreciate seeing McCoy's "cover" of an Addams cartoon. I really dig those rare opportunities where you get to see one cartoonist with a very distinct, specific style covering the character or subjects of another cartoonist with a very distinct, specific style.

I have no idea why McCoy might have thought it would be the best choice for illustrating Alaska Governor Sarah Palin's fake outrage over David Letterman's flubbed, dumb joke about one of her daughters though. In fact, I only know that is what the cartoon is about because McCoy included a caption that says "David Letterman makes a vulgar joke about Sarah Palin's teenage daughter."

First, how common is the reference? Addams is undoubtedly a famous cartoonist, but he's far more famous among cartoonists and cartoon art enthusiasts than among the general population of newspaper readers today, who know him primarily as the creator of The Addams Family. Are his individual cartoons so well known? I don't think so, and this isn't even one of his more famous ones, like the Christmas carolers piece (see below) or the one with the skier and the tree.

I suppose it's labeled "thanks to Chas Addams" in the lower right corner (everything's always labeled with these people!), below McCoy's name and a couple other words (The name of his home paper, I think?) But I don't think the specifics of that single Addams cartoon are terribly common. Certainly they're not as instantly recognizable as, say, a riff on Snoopy laying atop his doghouse or a fat cat with a blase expression and half-closed eyes or the blank-faced Keane cherubs might have been (Not that any of those would work better in this particular cartoon; I'm just thinking of more popular cartoon imagery among modern newspaper readers).

Second, applying McCoy's topic to the cartoon is a rather awkward stretch.

The joke in Addams'—and it's just a joke cartoon, devoid of politics—is the disconnect between the ghoulish Addams character (who we now recognize as a pre-Uncle Fester Uncle Fester) and the rest of the movie-going audience. They are all pretty upset by whatever the sad event in the sad movie they're watching is, whereas he thinks it's hilarious. It's just the sort of gentle, quite, observational humor that The New Yorker is known for.

Okay, so let's try to reconstruct the parallel lines McCoy is suggesting. Here, the weird character is "The Left," clearly labeled as such. Is "The Left," defined I suppose as people who think Sarah Palin is a funny joke, really marginalized as the Uncle Fester character?

Is the live studio audience of some dumb late night television show for old people the equivalent of the audience in a movie theater? I...guess...? Because they're both groups of people? Sitting down? In an enclosed space? Expecting to be entertained?

To be fair, I can't imagine this is an easy subject to ridicule with a political cartoon, but then, picking a target and understanding it is a pretty important part of political cartooning, isn't it? McCoy seems to be implying that Letterman meant to tell a joke about Palin's underaged teenage daughter with a funny name being raped by a baseball player, rather than mistakenly referring to her adult teenage daughter with funny name being impregnated by a baseball player.

Granted, the joke wouldn't have been funny even if he had said "Bristol" instead of "Willow," but it was clearly just a lousy telling of a lousy joke, not an endorsement of child-rape, and as ignorant as Palin may strive to appear in public, she's not actually so stupid as to have thought that Letterman meant to refer to Willow being raped either.

In this cartoon, McCoy does seem to think that—or is at least pretending to think that, and whether he's being ignorant or faking outrage like Palin herself, it's pretty sad.

Besides, The Left is watching The Colbert Report when Letterman is doing his monologue.

If you would like to read another member of "The Left" respond to the whole dumb Palin/Letterman episode, then check out Jim Newell of Wonkette's analysis. I second his comments. Which will save me form having to write anymore about how fucked up the cynical politics of accusing TV comedians of telling jokes about your daughter getting raped actually are. (Hint: Pretty fucked up)

While looking for scans of that Addams cartoon (and failing, ultimately having to scan it from a copy of The World of Charles Addams [Knopf; 1993] myself), I came across another, older example of a modern political cartoonist using an homage to an Addams cartoon, and not necessarily doing a very good job of connecting the source strip into the new context: 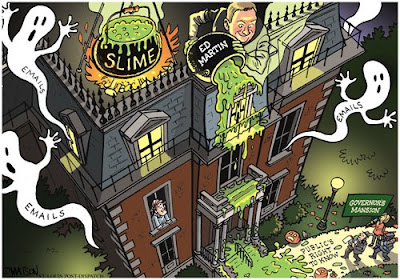 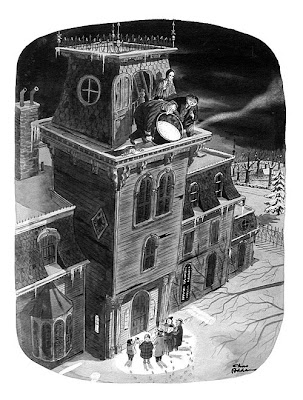 McCoy was a lot more meticulous in his homage; this one seems like it may have been done from the memory of the Addams cartoon, rather than from looking closely at it while drawing this new cartoon of the press walking up the public's right to know (?) to get to the emails-haunted governor's mansion (?), where some man is apparently dumping a steaming green, viscous liquid called "Ed Martin" on the porch while the slime in the slime cauldron boils.
Posted by Caleb at 4:06 PM

The fake outrage over this situation is just amazing. Suddenly Letterman is Super Liberal and A Rapist and He Will Verbally Rape Your Daughter.

Do people even think anymore?

I would just like to go on-record that I will personally verbally rape and defile any Charles Addams cartoon I can lay may hands on.

Because that's the way I roll.

I'm pretty sure that after Addams Family Values, the cartoons would just lay back and take it with a sigh, Jeff. You can't hurt them any worse.