I had a busy weekend, so here, just look at these pictures

The weekend before last, I decided to try out this new pen I received as a gift a while back. I don't know much about pens and suchlike; most of the drawing I do is done in pencil, and then I trace over the good lines with a Pilot G-2 05, and erase the bad ones. This is a Faber-Castell PITT artist Pen B. Does that mean anything to anyone?

At any rate, it makes a line like a really nice marker, and it has a huge tip, about one and a half times longer than my normal pen. 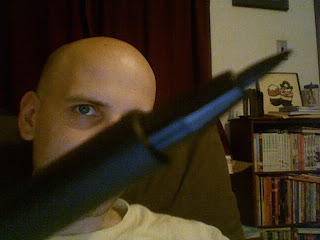 (Above: Look at the size of that tip!)

So I stayed up about two hours later than usual, listening to/half-watching a Mystery Science Theater 3000 DVD ("A Touch of Satan"; have you guys seen that one? Man, Emby Mellay is so hot, why wasn't she in any other movies?) while I pushed the pen around for a while, eventually moving from lines to the things I usually doodle—parrots, unicorns, rabbits, bald headed men—and ended up killing an hour or so just drawing pictures of myself with or as mythological creatures.

A couple weeks ago I read Laura Miller's The Magician's Book: A Skeptic's Adventures in Narnia, which was pretty great (if you like C.S. Lewis' Narnia books, and/or literary criticism, anyway). Miller wrote at one point that the faun character Mr. Tumnus was C.S. Lewis as a Narnian. I think that was the starting point... 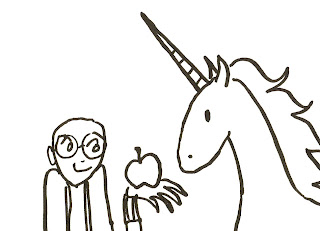 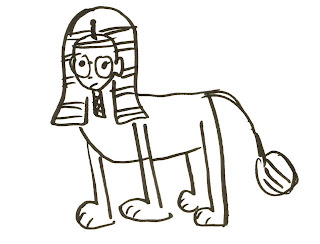 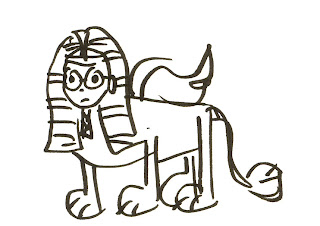 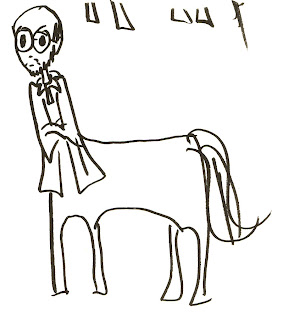 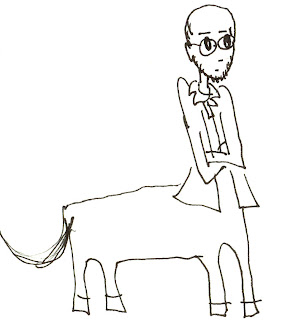 With normal pen. See how much thicker and less squiggly the new pen's line is?

A few hundred more hours, and I think I'll be able to skip the pencil phase and switch to this new pen, so I can make big, fat lines like this all the time.
Posted by Caleb at 5:18 PM

Labels: behind the curtain, phoning it in, sketchbook

I very much like the pen version of Centaur Caleb.

i thought you were holding a soldering iron.