Captain America sure asks a lot of questions...

The back-matter in last week's Young Allies Comics 70th Anniversary Special #1 included a couple of ads for Captain America's Sentinels of Liberty, described in one as "the greatest army of red-blooded young patriots ever assembled under one flag...waging a war to the finish against spies and traitors to our country." Another says that each Sentinel of Liberty is "a member of Captain America's own mighty legion."

It sure sounds fishy. Is it a cult? A nationwide boys' gang? An early 20th century militia, for children?

I don't know. I'm afraid I'd need to read more about it, and maybe talk to some of its former members, to really get to the bottom of it. But it must have been tempting to join. For one thin nickle, the price of a comic book, you would get an official membership card and a real badge, as well as the knowledge that you were part of Cap's own personal army of paranoid neighborhood children, "on the constant look out for spies..."

Here's the "Sentinels of Liberty Secret Club News," through which Captain America and Bucky transmitted their orders directly to their Sentinels: 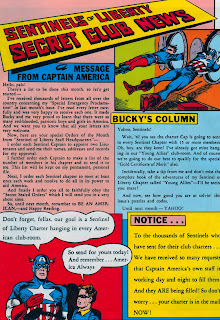 Let's take a closer look at the "Orders of the Month":

Sheesh, that seems like an awful lot of information to send in to Captain America.

I mean, sending him the personal information and "records" of your pals? And what's with this permanent record business? Even if Cap could be trusted not to do anything unethical with all that information, what kind of privacy protection did he offer?

What ever happened to all of that information Cap collected when he was frozen in a block of ice for decades? Or when he died at the end of the recent superhero civil war? Did Bucky Barnes assume ownership of it, along with the Captain America identity? Or is there a dusty box of folders in a SHIELD or Marve Comics warehouse somewhere, containing the records of our grandfathers?

This whole thing makes me feel weird. How much do you really trust this man? 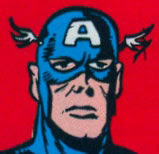 How much can you really trust this man, this man who always wears that creepy mask?
Posted by Caleb at 8:30 PM

Cap needs all that info to fight Hitler and the rest of them Ratzis. Why do you hate America?

That "Sentinel" campaign actually had 20,000 subscribers.

Cap must have had an awful lot of records....

Only pedophiles have wings on their head.

Thor and Jay Garrick, you guys aren't getting off easy either. (Uh, pun not intended.)

I'm assuming this all has something to do with decoder rings and Ovaltine.

HAHAHA... Nice picture of his face, seems like on drugs