Ten things I learned from the Marvel Pets Handbook 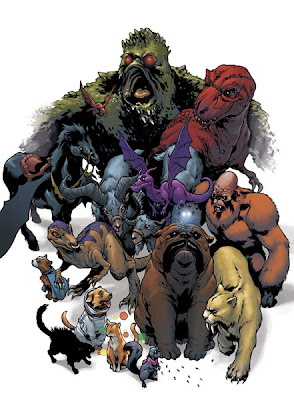 1.) That horses—winged, horned or otherwise—are measured to their withers to determine their height. And the withers are, apparently, the highest point of a horse's shoulders, or where the two shoulder blades meet. I did not know that until I looked it up after reading this handbook.


2.) The Marvel multiverse may be even more complicated than the DC one. DC Comics used to get a lot of flack for how complicated their shared setting was, considering the fact that it consisted of alternate dimensions with alternate versions of the same characters, and that they were permeable enough that the Supermen of Earth-1 and Earth-2 were pals, and characters like Red Tornado and Black Canary could immigrate between the two. Prior to Crisis on Infinite Earths, they were designated by numbers or letters—Earth-4, Earth-S, Earth-X, etc.—and, after a few years of fiddling with it, it now seems like they're using just numbers, and that there are 52 different earths.

I imagine there's also a handbook that defines all of these, but I haven't got that one. 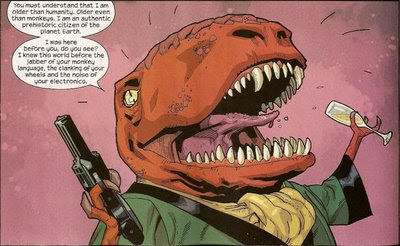 3.) NEXTWAVE is apparently considered continuity/canon. Even the bit with Devil Dinosaur at the end. That DD, however, was allegedly "a clone of Devil."


4.) Dick Ayers draws an awesome gorilla. Look at this thing, one of the "Beasts of Berlin" from Tales to Astonish #60: 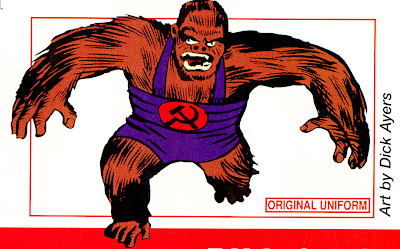 I like how fast and rough the art is. It looks like Ayers drew it from memory, rather than photoreference, and came up with something that looks awfully close to a gorilla, without being too faithful to what gorillas actually look like.


5.) The Montauk Monster is obviously a relation to Droog, Russian scientist The Gremlin's bioenginnered dog. 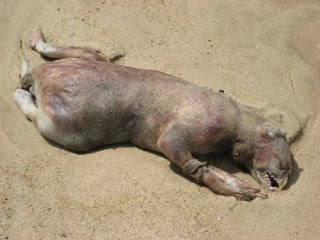 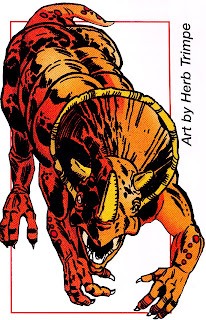 6.) The Punisher used to have a dog, with a Punisher logo dog-chain. In the handbook's introduction, it is noted that "the notion of a super-pet—one who shares teh powers/appearance of its master–is particular to the publications of a certain Distinguished Competitor." Superboy had Krypto the Super-Dog and Beppo the Super-monkey, Supergirl had Streaky the Super-cat and Comet the Super-horse, Batman had Ace the Bat-Hound. There are a few of those sorts of pet analogue super-pets in the Marvel Universe, including Speedball's cat Niels/Hairball and The Sentry's Watchdog (although the Sentry is simply a Superman stand-in). If you would have asked me a couple weeks ago who the last Marvel character who would keep a dog version of himself around might be, I probably would have said The Punisher. 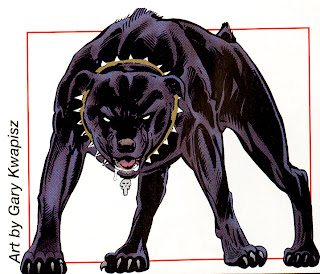 But I would have been wrong. Apparently in the early '90s Frank Castle rescued "a particularly savage rottweiler" named Max from a drug dealer, nursed him back to health, gave him a Punisher branded collar, and used him as a watchdog.

I don't think Punisher's Max ever appeared in the Punisher MAX title, but I still have a few trades to go before I finish that series. Maybe someday someone will do a Max MAX series...


7.) Loki is a lot weirder than I thought. I probably knew this at one point, back when I was a kid and would read encylopedias of Norse or Greek myths from the library, but Odin's eight-legged horse Sleipnir has a pretty weird parentage. Apparently the Big O wagered Freya in a bet against a frost giant who disguised himself as a stonemason. Loki knew that the giant's horse did most of the work, so to stop the giant from successfully rebuilding Asgard's walls in the bet-upon time-period, Loki "took the form of a young mare, and lured the stallion away...when Loki returned, he brought with him an eight-legged colt."

Soooo apparently Loki's tricky plan to stop the work was to transform himself into a female horse, let another horse fuck him, and then give birth to the baby horse he got knocked up with while seducing the giant's horse...?


8.) There are half-gorilla, half-lion monsters in both the DC Universe and the Marvel Universe: 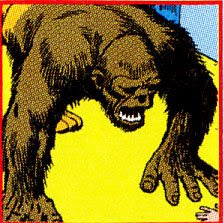 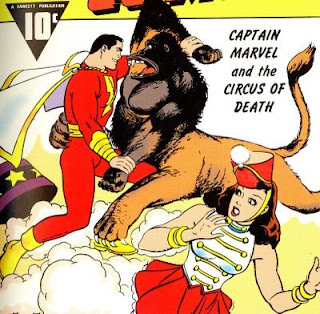 9.) The Nazis were so evil and so monstrous, that even their pets were evil monsters. 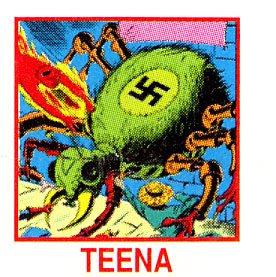 Even the one's with femine names. (Or does "Teena" mean "Eight-legged Death" in German?)


10.) There is a ton of potential for future Lockjaw and The Pet Avengers sequels, if the first series sells well. A trip to asgard alone would supply Lockjaw and company plenty of animals to meet, team-up with or butt heads against. And there are more than enough pets of super-villains for The Pet Avengers to come into conflict with The Pet Masters of Evil.
Posted by Caleb at 3:14 PM

Real animals are funny because they do things that are vaguely human (scratch themselves, throw feces, howl), but in such a way that we can't anticipate or really see the logic for, and that makes them amusing.

But fictional animals . . . are written and drawn by people. They only look and act as bestial or human as the creator's imagination allows. I can see being a fan of some that are written or drawn well (I personally like Promethea's Weeping Gorilla), but taken generally or collectively . . . why?

*Makes note not to invite Hdefined over for a Lassie marathon*

I wonder if they'll hand-wave the Nextwave Fin Fang Foom the same way. That it was a clone or similar that they fought. I would have gone with just having the mini-series not be in regular continuity as easier. Even allowing that the current version of Aaron Stack matches Ellis' one...

From what I recall, a lot of Marvel writers assumed 616 was referring to June 1961(Instead of just being a number Alan Moore picked out of a hat) and picked up the habit of numbering the universes based on the month/year/issue number of the universe the issue first appeared in.

"*Makes note not to invite Hdefined over for a Lassie marathon*"

You didn't know that about horses? Gee, just ask any 14-year old girl. Most of them go through the "horse" phase...or at least they used to.

I'm old, what do I know? But it does please me that Nextwave is in continuity.

As far as I was concerned Nextwave was one of the ONLY in-continuity Marvel books since, say 2004 or so. It's Bendis (post-Daredevil/Alias)/Miller/Loeb axis that doesn't count for me.

I also hold that it is one of the most "Marvely" books of the decade.The true 21st bastard offspring remix of the Lee/Kirby vibe.