Assuming Spider-Man is referring to the proportional strength of a spider. 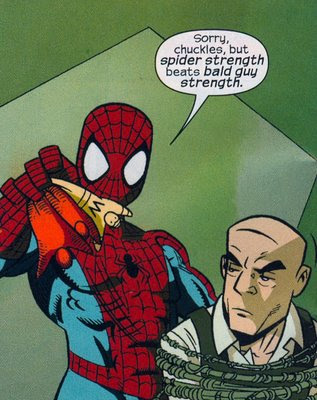 As Tom Spurgeon points out in the link to last night's post ("Spider-Man is correct") he put in the "Quick Hits and Craft" section of his June 24 post, "Spider-Man Is Not Correct." And Tom is correct regarding whether or not Spider-Man's statement is correct. Most, if not all, bald guys are stronger than most, if not all, spiders. I'm pretty sure even the weakest bald guy in the world (Mr. Burns from The Simpsons holds that title, I think) could bench press more weight than the strongest spider in the world.

A man with the proportional strength of a spider, like Spider-Man, is stronger than most bald guys, however. Certainly stronger than The Puppet Master, whose dolls he's depicted taking away above.

Spider-Man should really speak more clearly. And I should have thought of Tom's joke, which was funnier than mine.
Posted by Caleb at 12:49 PM