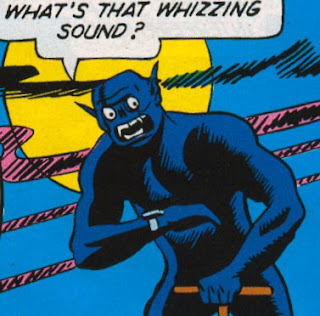 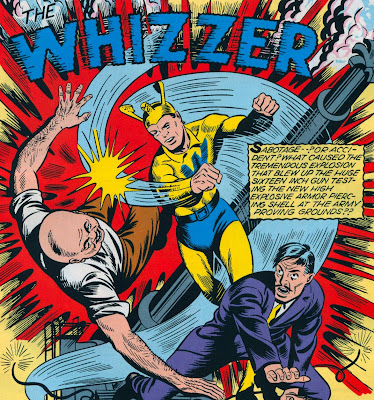 And look at his hat! It's got funny little wings on the sides, which, okay, is kinda silly, but some superheroes make it work. But! It also has a little bird head coming out of the front of it! 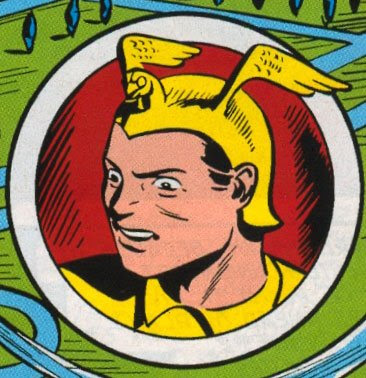 I imagine it's probably supposed to be an eagle or some kind of heroic bird, but with the bird head and wings extending from his round head, it really makes it look like some kind of fat yellow chicken or duck, doesn't it?

And the best part? 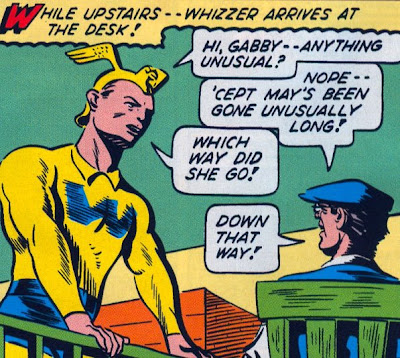 In some of the panels it looks like the bird on his hat is actually speaking his dialogue. 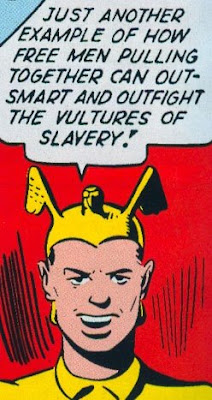 Whenever I read about the Whizzer (which, admittedly, isn't often), I want him to reveal that he's actually Byron "Whizzer" White, All-American running back in the 1930s and later Supreme Court Justice. He'd fit in as a superhero, wouldn't he?

I'm pretty sure he got that hat at Spencer Gifts. On clearance.

In the intro to the recent Demon hardcover, there's an anecdote about Kirby swiping the Demon's look from a panel in an old Prince Valiant strip where the Prince disguises himself by sticking his head inside a cooked duck. And, um, the Whizzer's hat reminded me of that.

Yes, that is most definitely a golden chicken on his head. Those sweet golden eggs is how he got the rest of the costume. Also, is that gargoyle checking to see what time it is on the top panel? Oh comics!

With that name like 'Whizzer' that chicken half is the least of your problems. Another one I would double over laughing at if I was his arch villian.

If the original Whizzer was actually a mute and he communicated using his magic bird hat? That would be kind of cool...

Let's be honest. If you saw him in person, you'd bust a gut laughing. There'd be, a bare minimum, half a minute before you could put a clip into him.

Given that he's a speedster, that half a minute is all he needs.

It's not even the golden chicken on his head, it's the Peter Pan collar thing that he has going on, in his uniform.

Just cracks me up.