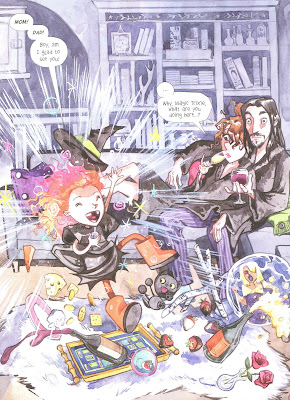 Hmmm...robes, wine, cheese, crackers, strawberries-dipped-in-chocolate, bearskin rug and snuggling, on a night when they thought their grade school-aged daughter Magic Trixie was spending the night at a friend's house. I wonder what Magic Trixie's parents were planning to do with the rest of their evening, before Magic Trixie activated her pre-cast return spell and she and Scratches appeared out of thin air?

I think the look on her dad's face tells the tale.

(The above page is scanned from Jill Thompson's Magic Trixie Sleeps Over, and thus concludes this weekend's lazy just-post-some-art-from-the-same-graphic-novel-over-and-over posting plan. Non-Magic Trixie related posting to resume shortly)
Posted by Caleb at 9:38 PM

*cock blocks, unless her dad has multiple cocks.

No wonder Harry Potter was so famous.

You know, Magic Trixie's mom might have had some investment in the situation as well...

Yeah, she seems to have kept her composure a lot better though. Her dad looks, like, paralyzed with shock.