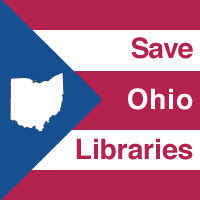 If you don't live in the great state of Ohio, this likely won't matter to you at all, but I know a lot of you guys do, so I figured I'd post this here. If you do live in Ohio, then you've probably heard that the state is in a pretty dire budget crunch, and needs to pass it's biennial budget by July 1. There's currently a $3 billion gap that needs closed. Among Governor Ted Strickland's plans for closing that gap is to cut $227 million from the money being allotted to state libraries.

That is an awful lot of money. The way libraries in Ohio are funded is that they receive 2.2-percent of all tax money the state collects, but because tax revenue has fallen so sharply in the rough economy, they've already been receiving less and less money from the state each month—$30,000 here, $75,000 there, and so on.

Now, I'm no economist, and don't have any advice for Strickland and the state legislature as far as what might be better to cut, or how they could maybe make some more money (Beyond the obvious, "Hey, maybe you guys oughta raise taxes on something other than cigarettes once in a while?"). But I'd really, really, really rather them not cut any more funding from the state's libraries, especially at the levels they're talking.

This is mostly for a very selfish reason. As some of you know, my day job is working part-time at a local library; that's how I keep a roof over my head, food in my belly, electricity in my lap top and a handful of comics in my lap every Wednesday afternoon. Most (if not all) libraries would have to cut hours of operation if their funding is cut too severely, which will likely be pretty bad news for folks like me, who are eking by on the few hours a week we work.

Also, it likely means libraries will take a hit in their materials ordering budgets, and as I mention fairly frequently, a significant amount of the graphic novels I review here tend to come from the Columbus Metropolitan Library system (which I don't work for, but they're the biggest system in town, and order pretty much any graphic novel that gets published). So I guess, in that respect, it might affect you too. At least, it would jeopardize my ability to review collections of comics too terrible or too expensive for me to pay to read (like, Jeph Loeb comics, or anything Marvel publishes at their evil $3.99 price point).

Oh, and the scanners I use to put images on my site and on Blog@ are the ones at my local library. I don't have a scanner of my own, and won't be buying one any time soon. So if my local library loses hours of operations...Christ, blogging's gonna get a lot harder.

Less selfishly, as a person who lives in Ohio, I think everyone in the state benefits from having a healthy and thriving library in their neighborhood. Free books, free graphic novels, free movies, free music, free access to computers, free research assistance—libraries offer an awful lot for very little, and are especially important in tough times like this.

So, what can you do?

Well, you can visit the Ohio Library Council's website, olc.org. You'll find plenty of info about what the hell is up exactly, from people who communicate such things a lot more clearly than I do. For example, here's how the site frames the problem:

Libraries could close or face significant reductions in operations as a result of the Governor's proposal. With some 70% of the state's 251 public libraries relying solely on state funding to fund their operations, the reduction in funding will mean that many will close branches or drastically reduce hours and services.

The Governor's proposed funding cuts come at a time when Ohio's public libraries are experiencing unprecedented increases in demands for services. In every community throughout the state, Ohioans are turning to their public library for free high speed Internet access and help with employment searches, children and teens are beginning summer reading programs, and people of all ages are turning to the library as a lifeline during these difficult economic times. Ohio's public libraries offer CRITICAL services to those looking for jobs and operating small businesses. Public libraries are an integral part of education, which Governor Strickland says is critical to the state's economic recovery. But it is unlikely that many of Ohio's public library systems, especially those without local levies, can remain open with these proposed cuts.

You'll also find suggestions of who to call or email (the governor, your elected representatives) and what to say when you do.

Anyway, if you live in Ohio and care enough to have read this far into this post, please take the five minutes or so it takes to poke around the OLC site and fire off a few emails.

What delightful, dynamic destruction!
Posted by Caleb at 10:27 AM