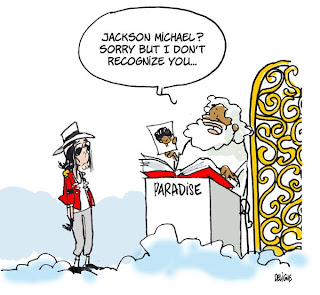 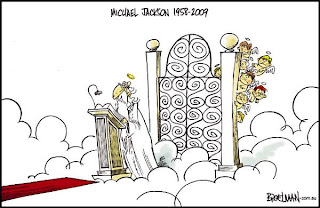 If Jackson was some sort of pedophile and was guilty of some form of child abuse, then why would heaven roll out the red carpet for him? Do child molesters get to go to heaven? 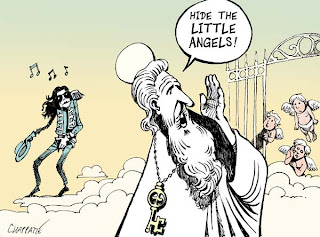 And, more importantly, WHY IS THEIR CHILD ABUSE IN HEAVEN?!! Surely everything on the other side of the pearly gates has to be a child-rape free zone, right? Right? 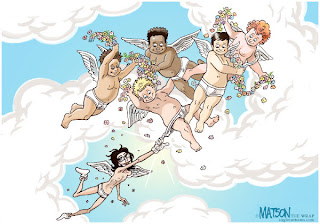 Are the "little angels" the souls of human children given wings and halos upon entry into heaven, or are they true angels, members of a sentient race God created to serve and worship him before humanity existed, which would make even the youngest angels millions, if not billions, of years old? (In which case, they're past the age of consent). Or is heaven such an intensely personal experience that it doesn't matter how wrong one's personal desires might have been on earth, they can be safely fulfilled there? 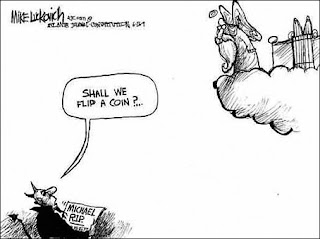 How are our immortal souls judged after death? Is it as arbitrary as a coin toss? 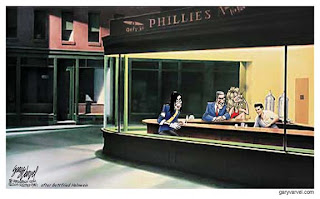 Do famous people go straight to their final judgments, or is there a special VIP cafe they gather in together before going on to their final rewards? 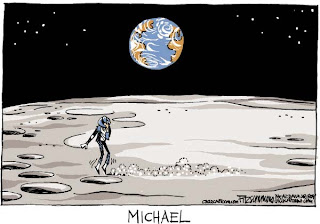 Are heaven and hell the only options, or might our souls ascend to the nearest celestial body to earth, like maybe the moon? 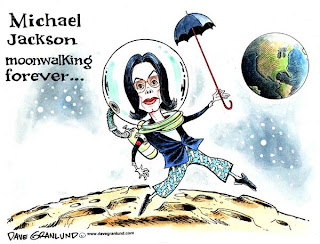 And if so, will we still need to breathe after we die? 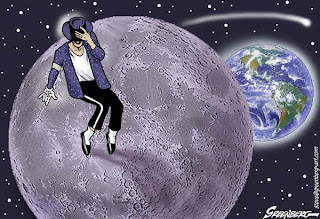 Was Michael Jackson such a big celebrity that he's too big to even fit on the moon, but must orbit around it, just as the moon orbits around earth? 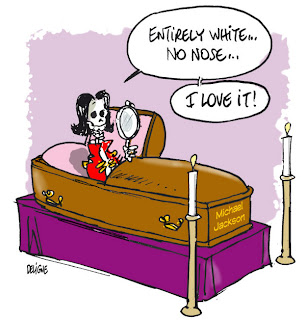 What if our souls don't live on in an afterlife or outer space after we die, but our consciousness remains in our bodies, which will slowly rot away to bones? Will we be able to move and talk once we're dead? Will we be able to see even after we've lost our eyes? 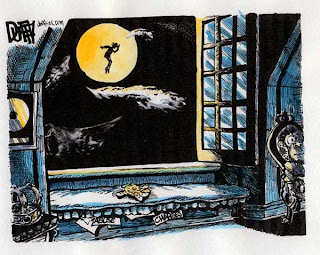 Or did Jackson not even leave a body, but ascended bodily into heaven, like the New Testament tells us Jesus Christ himself did?
Posted by Caleb at 9:53 AM

Ok, the one cartoon by Matson is genuinely disturbing. Why do the angel boys look so into being molested by Michael Jackson?

yeah i was gonna comment on that same one.

firstly, they don't even look like young cherubs. they just look a like a pack of giddy overweight young adults, in which case, depending on the age the viewer might want to assign these cherubs, the age of consent might be passable. but jackson wans't reportedly "into" young adult males. he liked young boys allegedly.

the cartoon fails miserably on so many levels. not funny. not relevant to his personal life. just all around stupid.

and that photoshopped moon one just looks terrible.

It's all fine. Michael Jackson is going to come back as the Spectre, and then be fully brought back to life after it's proven that he was possessed by an all-powerful space bug right about the time his hair caught on fire while filming that Pepsi commercial in 1984.

will elvis be with him???

Heck yeah! In fact, Elvis is gonna come back FIRST, brought to life by Jackson. 'Course, Elvis will have a little trouble at first. He'll likely be amnesiac, and have trouble coping with modern gadgets like cellphones and computers. Then it'll turn out that Elvis is merely a Hollow, while his soul is taking it easy in Heaven somewhere ...

Maybe I'm naive, but I was surprised at how many cartoonists chose to address the news by making fun of Jackson's scandals and problems rather than paying tribute to him. But I guess that's their job.

Cherubs like being groped? Who knew? Anyway, good roundup and commentary.

I think you're reading too much into them and forgetting the simple fact that child molestation is comedy gold.