A couple of reviews of review copies

Eclectic Comics #1-#2 (self-published) These two issues are the work of one Andrew Wales, who, in addition to being a comics-maker, is also a comics character: The Mighty Andar, seen on the cover above striking a Superman on Action Comics #1 pose (Hmm, needs a dude totally freaking out in the foreground).

The title of the book is quite apt, as each issue features multiple stories that could be on pretty much any subject, although Andrew or Andar are usually involved in some way.

The results read a little like a comic book version of the sort of notebook or journal you might have had to keep if you ever took a creative writing course in college. The individual stories are generally generated by some sort of challenge.

The first issue, for example, features a two-page answer to the challenges “If you had superpowers, what would they be? Draw your origin story,” “Draw a biography,” “take the lyrics of a song that you like and illustrate them,” and so on.

This is my favorite one, “Draw a twenty panel page.” 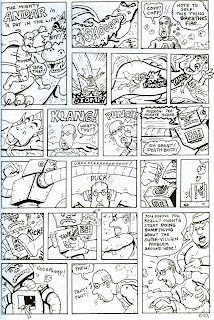 I love panel-packed pages. Regardless of what’s in them, what the pictures are, what the words are, or the quality of the pictures and words, I just love to look at a page full of little boxes like that. As you can see in Wales’ one-page story, he has a lot of fun using the panels to stretch time an focus in interesting ways, so that by the middle the Death-Bots and Andar are fighting so furiously that they’re knocking each other in and out of panels.

Because of the challenge-driven contents, you get that sort of light-hearted superhero parody juxtaposed with a three-page tale of a younger-looking Wales avatar telling a goodnight story to a son next to a five-page Monet biography.

The second issue is more superhero/Andar focused, with the only non-Andar story being that of the last time Wales ate a particular brand of frozen fish sticks, and why (hint: the scrambler at a fair was involved).

If you’d like to see more of Wales’ work, and to order a copy of either book, visit his site here.

Swordsmith Assassin #1 (Boom Studios) The title is so generic as to be meaningless, and there’s a predictability to many of the major plot points that doesn’t speak well of the book’s originality, but there’s no denying that this new series has a great premise and a great hook for a serial comic book.

It’s 1870, and a disheveled Japanese man with a sword wanders into a Russian army camp, asking for the general to give him the general’s sword in exchange for his story. The general listens, and the man explains that he is Toshiro Ono, the son of one of the greatest swordmaker’s in Japan, and himself a master swordsmith.

He tells of how he had rebelled against his fathers insistence of only selling his perfect blades to men who deserved them due to their own perfect honor, and how he sold swords to whoever could afford to buy them. For money.

What happened to Ono? It used to be about the swords, man. Anyway, he goes on a business trip, and returns home to find his family killed by a thief (given how it’s telegraphed, I don’t think this constitutes a spoiler), and, when he finally tracks the thief down, he discovers to his horror that the thief used a sword that he himself had made and sold him. Irony!

So Ono has devoted himself to wandering the world recovering all of the blades he made.

I guess the premise comes from Andrew Cosby, who gets a “story” credit, while Michael Alan Nelson is credited with “script.”

The art is by Ayhan Hayrula, colored by Andres Lozano, and it was unusual to see a story involving samurai that wasn’t black and white and manga style. Unusual, but refreshingly so. That is, while the subject matter was subject matter I’ve seen over and over, it didn’t look like most of those comics dealing with the subject matter that I’ve seen before.

Hayrula seems most comfortable in long and medium shots, and the art is for the most part rather static, but not necessarily deficiently so. There’s a quiet, deliberate mood to the story and the characters, a mood that seems befitting the predictable/inevitable events that lead our protagonist toward his tragedy, and then to his quest.

Tales of the TMNT #59 (Mirage Publishing) According to five paragraphs of synopsis that writer Tristan Jones provides on the inside cover, this story ties pretty closely into the events of Teenage Mutant Ninja Turtles #50-#62, the year-long “City at War” storyline. I read that story as it was originally released, (in fact, that was the only comic I ever had a subscription to, and it sure was fun getting a comic book in the mail at some totally random time), but I don’t remember the events closely enough that what Jones was describing sounded at all familiar.

It doesn’t matter though, which is why I bring it up at all. Perhaps knowing your Turtles trivia better will add to one’s enjoyment or appreciation of this issue, but it seemed perfectly user-friendly to me, and I don’t remember those issues of the original black and white volume of the comic hardly at all.

This also kind of sort of follows up on Jones’ Tales of the TMNT #56, but again, it’s not necessary to have read that to read and dig this: It’s very much a complete, done-in-one crime comic, that just happens to involve teenage mutant ninja turtles in the corners.

It’s entitled “Expose,” and it’s about a hard-nosed crime reporter who is getting so close to some big story exposing corrupt elements of the New York City Police Department and their ties to a mysterious criminal organization called The Foot Clan that her editor is getting scared for his (and her life), and orders her to check out another story: Who is this Hun crime boss character, and why was he get parole after serving only a decade of a life sentence?

She reluctantly takes the new assignment, only to find out that it dovetails into the Foot Clan story, as she finds a meeting Hun, a Foot representative, and a snake-faced urban legend crime lord known as King Cobra.

The titular turtles intervene a couple of times, saving her life and working to not become part of this, or any story.

Michaelangelo is the only one who gets any substantial panel-time, as he’s the one who keeps hauling the reporter away from the fight scenes, and even he is framed pretty mysteriously. When they appear, they just jump out of the dark shadows, have a fight scene in the dark and disappear.

Paul Harmon’s highly shaded, shadow-filled artwork accentuates the mysterious nature of the title characters and the criminals, contrasting sharply with the well-lit scenes in the newspaper office. He does a remarkable job of selling the physical existence of the turtles, and their fellow mutant character, King Cobra. They all seem to be of the same world as all of the human characters he draws.

Here's a two-page sequence in which the bad guys order the snoopy reporter killed, and the turtles arrive to her resuce: 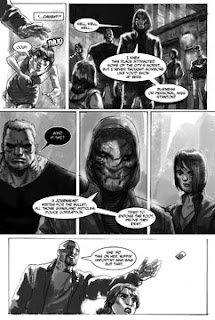 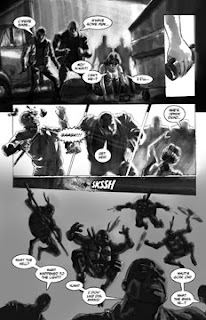 It’s a very solid little crime comic, and an extremely well drawn one. And I certainly wouldn’t mind seeing more of this King Cobra character, who seems like he might make for a better Turtle villain than Hun.

One thing though, Jones: I think King Cobra means “basic literacy skills,” not literary skills, on page 13 there.
Posted by Caleb at 11:51 AM

Thanks C, you're spot on too, that was meant to be a "c" and not an "r"! Looks like you don't need them to be a comic writer these days at least!