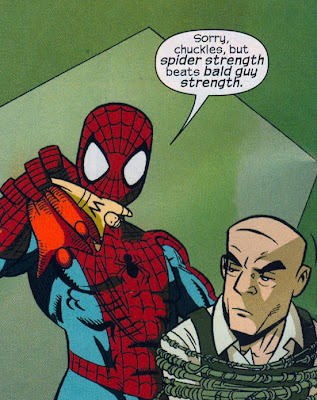 There are quite a few mad scientists in my men's social club, and a few of them actually proved spider strength's superiority to bald guy's strength scientifically. They irradiated me and then had me bite a puny high school nerd.

Did the kid gain the proportional strength of a bald guy? The results were inconclusive, as my strength is pretty much the equivalent of your average puny high school nerd. But the test subject's hair did get a bit thinner within the week, and I had to have some skin abnormalities removed a few months later.

(Panel scanned from Marvel Adventures Avengers #37, written by Paul Tobin and illustrated by Dario Brizuela and Leandro Corral)
Posted by Caleb at 3:08 PM

hey Caleb, I hope u read this.

Why don´t you put a search bar or that preference in which we can see the tags you already have to make it easier to look for older posts, today I´m looking 4 a review I only remember as "Mike Miknola drawing the entire DC universe" and it´s been hell to find it.

Because I'm not sure how to do it. Is there a search bar in the upper lefthand corner? I see one, but maybe cause I'm signed into blogger?

I assume I was talking about Cosmic Odyssey, as that's the only thing I can think of that has Mignola drawing much of the DCU.

If that is it, here's everything I wrote and labeled Cosmic Odyssey:

I can see about making the tags look-at-able when I get some time to screw around with blogger, which I generally try not to mess with too much since I know so little about computers.

I only know two things about this issue:

1. This was the worst art in the history of MA: Avengers, with the second worst Wolverine I've ever seen in an official Marvel Comic.

2. For a story with such potential (even though he did the "meet heroes of the old war days during a time travel crisis" story already a few issues earlier with the Howling Commandos), Tobin seemed to phone in the story. It wasn't up to his usual excellence.

It was the first time I gave such a low score to an MA: Avengers comic since I started doing ComiXology reviews. (Fan review--sadly, nobody's hired me or anything.)

Hi Caleb, here´s how u put the search bar @ the blog:

1.You go to your blog´s desktop (blogger.com/home).

2. Go to design, and there to the tab of elements of the page

4.There you can choose, I think it would be great if you choose the tag list and the new google bar, if you fail I´ll help you again :P

BTW, yes! that was it, cosmic oddyssey thanks a lot!

Sorry 4 going offtopic again, I´ll paste this comment on your newest post, since I fear you won´t see it here