So I finally finished Y: The Last Man...

I was reading Brian K. Vaughan and Pia Guerra's excellent Vertigo series Y: The Last Man in trade, and by the time I got to the sixth volume or so, I decided I'd quit reading it until it was totally finished and all the trades were out, so I could finish it all at once. It was just so suspenseful, I couldn't take the wait between volumes, particularly as it got closer to the conclusion.

Well, after a few years wait—in which I kind of forgot about Y, figuring I'll get to it eventually—I finally finished the series, reading the last two volumes just last night.

It was a fairly satisfying ending, particularly considering how badly it could have ended (the cover of the last issue really had me fearing the worst), and the fact that after so much suspense and build up, there wasn't really an explanation for the "gendercide" and a way out of it that would have lived it up to the mystery the first two-thirds or so of the series suggested (I would have liked a better explanation for the death than we got, honestly, but it wasn't a terrible explanation or anything).

And God, what a climax to the book. I—and everyone who read it—saw an aspect of the climax coming, but certainly not the exact way it played out. I'll admit, part way through the tenth volume, I was pretty emotionally devastated, and felt close to tears.

Specifically, when I read this panel: 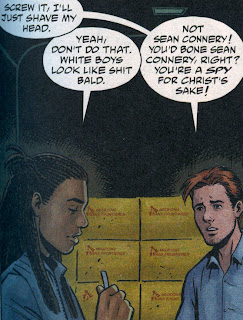 I was really into Y, but it nosedived about two-thirds in and hit bottom with the whole explanation.

It wasn't as bad as many other comic series out there, but compared to what Y had going for it, it turned me off to the series. I kept reading until the end, but it never recovered.

I loved Y: The Last Man, but it had one of the most depressing final acts this side of The Wire.

I wouldn't take the bald joke to harshly - http://en.wikipedia.org/wiki/File:Brian_K_Vaughan.jpg.

Jeff Winbush just posted a comment that I deleted because of a spoiler in it. If there's any more discussion of the ending here, please try to keep it spoiler-free. I normally don't care about that sort of thing, but I think Y is one of those comics in which the twists and turns are kind of integral to the work.

I'll re-post Jeff's comment below, minus the part I took out:

Vaughn's women were always more interesting than his male protagonist so I was royally PISSED when..."

"I sincerely hope Hollywood never tries to turn this epic story into a two-hour movie. It's a HBO mini-series or don't even waste time trying."