Which is fine. It's no Predator or Empire Records or anything, but it's not a bad movie.

If you haven't completely blocked the experience out of your mind, you may recall that during the very painful Ultimates 3 Week here on EDILW, I noted that in Utlimates 3 #4 Jeph Loeb actually has a character appropriate a very famous line of dialogue from The Terminator for completely non-ironic usage. Which was particularly strange given that the character who used that line of dialogue was a Terminator-like killer robot disguised as a human being.

Matt Ampersand, who writes for The Weekly Crisis, was kind enough to send me a scan of the first page of the first issue of X-Man, which was apparently a mid-nineties X-book set in the "Age of Apocalypse" continuity and also written by Jeph Loeb.

How did Loeb open the book? 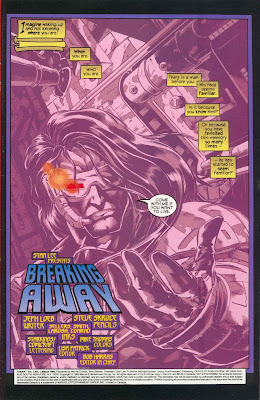 That is Age of Apocalypse-flavored Cyclops, his one eye glowing red, like the Terminator's.

Thanks for sharing, Matt!
Posted by Caleb at 1:15 PM

I feel bad for Steve Skroce for having worked on that.

It is still a mystery to me why I have a collection of that series. It seemed like such a good idea at the time!

Hey, he can lift the same line once every 13 years, right? Right?

To be honest, I was hooked on this series for some reason. It was probably Skroce's art. That guy's such an amazing artist.