Slightly disappointing day at the comic shop today, if only because a box got left out of their shipment, and thus I missed two books on my shopping list, Forever Evil: Arkham War #4 and Scooby-Doo Team-Up #2, which features Ace the Bat-Hound and The Scarecrow. Still, some pretty good stuff in the little pile I did take home though...

Adventures of Superman # 8 (DC Comics) Only one story this issue, by writer Marc Guggenheim, artist Joe Bennett and inker Belardino Brabo. It's about what happens when Superman discovers that Krypton never really blew up after all, and what life might be like were Superman able to fly there and visit his planet, his people and his father, and if it seems like it might owe a little bit of its inspiration to Alan Moore's "For The Man Who Has Everything," Mongul does make a one-panel cameo, perhaps by way of a nod, although the real reason everything Superman thought he knew is wrong (or is it?) is completely different.

Titano and Brainiac both appear as well, and bennett, an artist whose work I've never been all that crazy about, does pretty awesome versions of both of them, and I even rather liked his big, hulking Superman, but then, I've lately enjoyed seeing this "real" Superman, with his tights and shorts, each month in this book.

The early pages of this issue are awfully odd looking, as they seem split completely in half, with very wide gutters between the top two tiers and the bottom two tiers, which I imagine has something to do with this being a digital-first book, but a few pages in they seem to have corrected that, thinning the gutters and occasionally overlapping the panels in the second and third tiers.

In this issue, two more of Archie's classmates succumb to the zombie infection, Veronica tries to cheer herself up with a pool party and our ginger title character sneaks out of the safety of the Lodges' mansion to check on his and Betty's parents.

As with the previous issues, this comic features fantastic art, a surprisingly adult and effective horror drama and to give off a palpable aura of "Can you believe this book even actually exists?"

And as with issue #2, there's a "From The Vault" reprint of an old black-and-white horror comic by a comics master, this one by Dick Giordano.


Aquaman #26 (DC) I'm sad to say that I wanted to like this a lot more than I did, given that I like Aquaman, I like writer Jeff Parker (who is making his debut as the new Aquaman writer with this issue) and i like Paul Pelleteir (although Pelleteir is only one of the two pencillers drawing this issue; Netho Diaz being the other).

I haven't read past "Throne of Atlantis," so I'm a little behind on the goings-on of Aquaman, but this issue finds he and Mera in Atlantis, trying to rule as king and queen (not sure how she gets to be queen if she's just dating the king, but whatever DC), although many of the people are still opposed to him and even more are opposed to her.

Than a giant monster called the Karaqan, which I believe is Atlantean for Kraken, starts attacking the surface world, and Aquaman goes off to fight it by having Mera use her water powers to fling him through the air from Atlantis to Iceland (?!). The monster and the questions of Aquaman's legitimacy to rule are tied together.

It's a decent enough comic, and I plan on giving it a few more issues, but I guess I was expecting to be wowed, and wasn't. 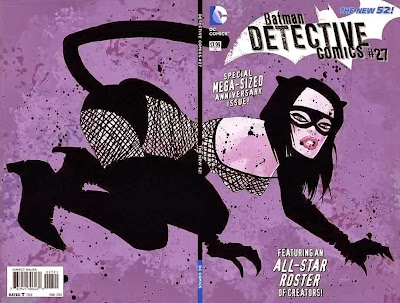 Detective Comics #27 (DC) I plan on having an actual review of this tomorrow afternoon at Robot 6, but this is probably a more appropriate forum for some stray, random thoughts on the book, like, for example, Holy shit, look at Frank Miller's variant cover!

I like to imagine DC asking him for a contribution, even if only a pin-up or a cover, and Miller thinking, Okay, you want a cover? I'll give you a cover! and then drawing what looks awfully close to his design for Catwoman from that Holy Terror, Batman! comic that turned into Holy Terror. I really love that cover in how it is just so goddam Frank Miller and so clearly unattached to anything vaguely Batman-related at all, aside from the fact that it has a woman wearing a cat-mask. Seriously, that's not the New 52 Catwoman, it's not any version of a previous Catwoman, it's not a possible future Catwoman, it's just a Frank Miller drawing of something vaguely, tangentially Batman-related. 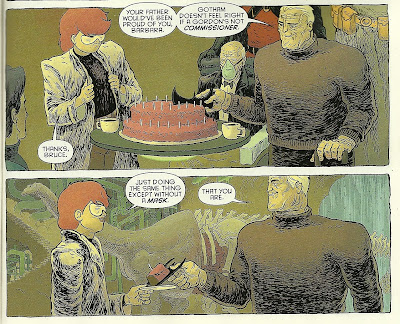 Ian Bertram should be drawing, and Sal Cipriano lettering, a Batman comic. Bertram's is the best and most interesting looking story in the whole book. I'm posting the above panels simply because in the background of the Batcave, Bertram has drawn a dinosaur, but not the expected dinosaur.

I was kinda disappointed by Kelley Jones' pin-up (Well, the background is amazing)... 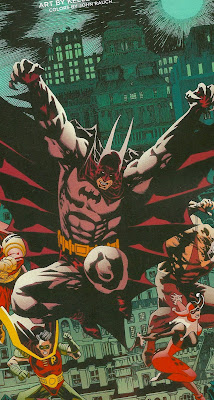 ...but then, I was disappointed in all the pin-up art, none of which looked as good as the wort of work many of these same artists produce regularly. Only Jock's pin-up seemed to be of the same caliber as his regular cover work (Also, I'm trying really hard to decide if colorist John Rauch mis-colored Robin's boots in that Jones pin-up or not. They're the wrong color for Tim Drake's boots—and why is he wearing a shoulder pad on his right arm, exactly...?—but all the other characters are clearly pre-New 52 versions, so that shouldn't be one of those retconned, New 52 Robin costumes, right...?) 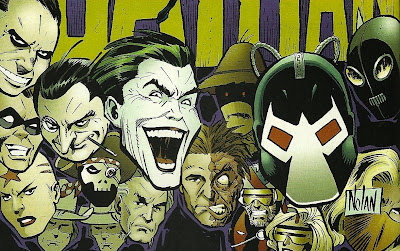 I liked Graham Nolan's Scarecrow. Did he get to draw a Scarecrow during his run on TEC...? His pin-up features a mix of classic Batman foes and characters he drew during his run (The above image is, obviously, just a portion of Nolan's pin-up. It also includes a big, brooding figure of Batman inspired by that of TEC #31 in the background, Batman and Robin III swinging before the figure, the floating villain heads, and the "Criminals are a superstitious, cowardly lot..." speech on paper-like narration boxes, and a giant "BATMAN"). 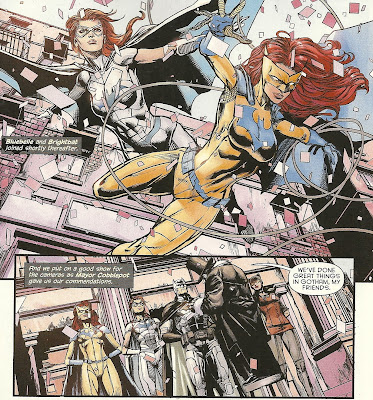 I don't even know what to say about "Gothtopia." The idea seems sturdy enough, but the costume designs and codenames are so fucking ridiculous I can't believe this was an instance where DC's now-notorious for interfering editors didn't interfere. Or maybe Layman and Fabok had a blue-and-gray costumed Bat-Man working with The Huntress Selina Kyle and various bird-themed Gotham heroes and editorial was like, "No, no, no, make it stupider! Stupider!" and Layman was like, "But 'stupid-er' isn't even a word; I think you mean I should make it 'more stupid,' but, why--" and they're like "Stupider! Stupider STUPID-ERRRRR!!!!"

(But yeah, I can't believe that got printed). 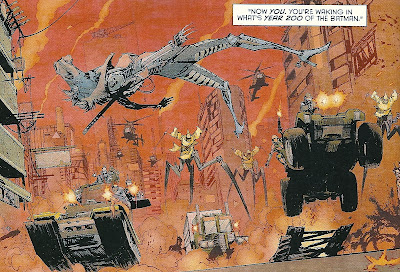 Sean Murphy so crowded his panels with awesome shit, he apparently got away with drawing a nipple. Sure, it's a nipple on a horse-headed cyborg woman, but that's a nipple nonetheless. 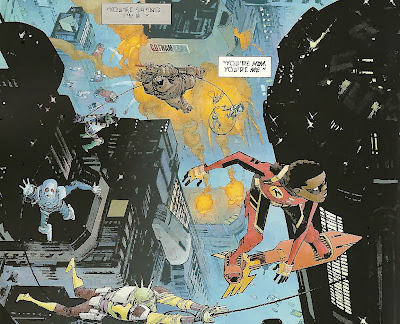 And, finally, in an alternate future, there will eventually be a black Robin and, I was amused to note, he will be riding a flying skateboard, which, of course, reminded me of the late, great Dwayne McDuffie's sarcastic pitch to Marvel for Teenage Negro Ninja Thrashers. 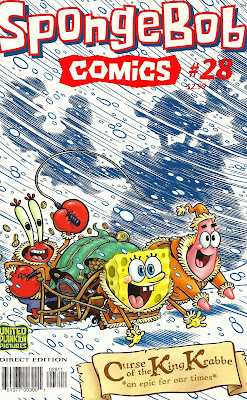 SpongeBob Comics #28 (United Plankton Pictures) The lead story—a whopping 22-pages, huge for a SpongeBob strip—evokes the old duck work of Carl Barks, and not simply because near the climax Mr. Krabs goes for a swim in a sea of gold coins (unlike Scrooge McDuck, Krabs strips naked before doing so). Rather, it features our heroes going to a far off land in search for treasure, and finding it, among various old-school adventure story conventions. That strip, written by Derek Drymon and drawn by Jacob Chabot, is followed by various shorts by various artists: A one-page strip by Maris Wicks about ocean life in the arctic; a two-page strip about what Squidward was up to during most of the events of the first story, drawn as well as written by Drymon; and a six-page story about a trio of pirates stuck in the arctic ice that has almost nothing at all to do with SpongeBob, written and drawn by Kevin Cannon; and another page of James Kochalka funnies.

So let's see, that's 32 pages of comics content, a single ad for the next issue of SpongeBob and a price tag of just $2.99. Huh.


The Superior Foes of Spider-Man #7 (Marvel Entertainment) So who exactly is the new Beetle, and how did she come to be? Well, now that we know who her dad is, regular writer Nick Spencer and fill-in artist Rich Ellis (not regular artists Lieber, as the cover states) tell us of her origin, from her very first heist to her suiting up.

As a Beetle solo story, with a trio of Marvel villain guest-stars, I wasn't sure what to expect—particularly given how eager I am to see what happens next in "the present" after the events of issue #6—but this turned out to be just as funny as the issues starring all five of The Sinister Six.

Not sure what the best line was, though. It was either "I'm gona be the Hillary Clinton-- --but you know... of drug lords" or "The Nazis were a long time ago."

Great, great stuff as usual. I'm going to miss this book when they raise the price by 33%...


Young Avengers #15 (Marvel) It's interesting that this final issue of the series, featuring artwork by Beckey Cloonan and Jordie Bellaire, Ming Doyle and Maris Wicks, Joe Quinones and Wicks (but no Wicks pencils! Waaaah!) and Jamie McKelvie and Matthew Wilson in various character-centric sections (ala the previous issue, the first half of the epilogue for the series), gives no real indication that this is the end of the Young Avengers as a team, other than Loki leaving the line-up. I don't know if writer Kieron Gillen wanted to leave things like this so that whoever does the next Young Avengers book will be able to pick up where he left off if they so chose, or if Marvel wanted a Young Avengers team in place to use for tie-in one-shots or miniseries to future event stories (the way they previously used Young Avengers and The Runaways when they were ongoing-less), but Miss America, Hawkeye, Wiccan, Hulkling, Marvel Boy and Speed all go out to breakfast together at the end of the issue, with no indication that this is their final comic book together.

Oh, and Gillen also makes it clear that his is the gayest superhero team of all time. "Am I the only person on the team who's straight?" Kate Bishop asks when Miss America and Marvel Boy both say things about their sexual identities, to which Miss America responds, "I've seen the way you look at me...You're not that straight."
Posted by Caleb at 11:09 PM

The Frank Miller cover makes me feel vaguely dirty looking at it. Like, "I should roll this comic up and hide it under my mattress" kind of dirty.

Is it possible that still there aren't TPBs of the Spongebob comics?