I only have one problem with this teaser image... 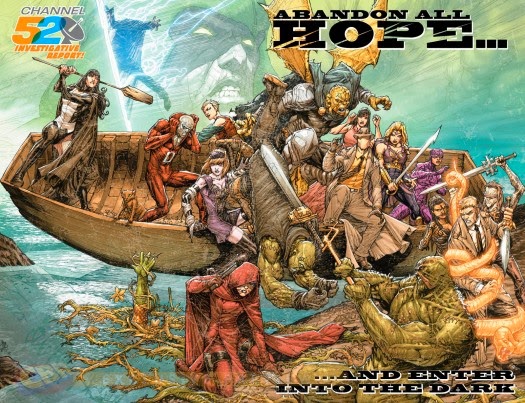 Here's the latest of those little clue-laden teaser images that DC occasionally publishes, which my paymasters at Comic Book Resources claim is "exclusive" to them, but I don't think that word means what they think it means because, ha ha, now it's on my site! (And also in all of the DC Comics that came out this week).

Anyway, this one seems to deal with the "Dark" portion of the current DC publishing line, featuring characters from books like Justice League Dark, Constantine, Swamp Thing and the two Trinity of Sin books.

I'm intrigued by Aquaman's out-of-place presence among all the magic characters, and the glowing orange snake, which resembles Ophidian, the avatar entity of "Avarice" on Geoff Johns' emotional spectrum of the DC Universe, as Larfleeze and/or the other five Lantern books don't seem to have much to do with all these magic characters and Vertigo imports.

I'm curious as to the identities of a couple of characters, including the lady with short blond hair behind Deadman, the two people right behind Constantine (I think I've seen the lady before, but I can't remember which book I saw her in), and, of course, what's up with that cat (CBR says its name is Socks, but I can't find a Socks in my DC Super-Pets Character Encyclopedia).

I'm reminded how much I hate the design of Pandora (who I just noticed has similar face lines to Rachel Grey of the X-Men, having just read a bunch of X-Men comics) and the re-designs of Etrigan and Black Orchid.

But really, the only thing I could see when looking at this image for the first time is Amethyt, Princess of Gem World's sword dick: 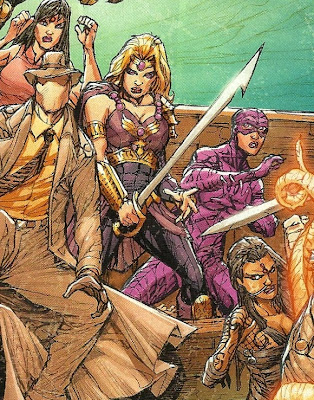 Artist Howard Porter probably could have moved her sword hand just a tad to her right, or tilted her hips away from the phallic symbol a bit.
Posted by Caleb at 10:31 PM

I can`t believe I didn`t notice that. But I must say, I like the allusion to Amethyst, the she-male, because of how surprising it feels.

To me, this "teaser" image didn't really tease anything. If you read all of the current JLD book "families" -- all the characters are from those books. There wasn't anything

I looked to see if there was anything to "read" in this image and didn't really see anything of note.

And, it *really* is not helping that this whole "Blight" storyline is dragging on. It's extremely repetitive if you follow all 4 books and is lending itself to my decision to drop all of them (well, except maybe JLD) after it's all over -- if not before.

Pandora -- has been a useless series.

Contstantine -- should be better than it is, but was interrupted by this whole "blight" storyline.

I'm not sure how much pull Soule has to keep Swamp Thing out of the cross-over, though, but I can only be thankful for that.

Oh great, now I can't NOT see that!

Howard Porter's art has really gotten bad. The faces he draws are terrible. I was surprised those were his pencils in JL3000.

Amethyst is obviously making the classic Obari pose, but the camera is positioned wrong to get the full effect.

I love it when artwork gets published like that--when it's too late for the artist to take back what their subconscious put down on paper.