Review: Wolverine and The X-Men Vol. 1 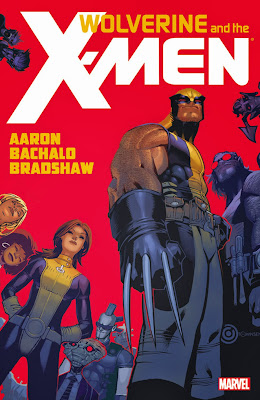 Jason Aaron followed a long, healthy, mostly high-quality run on Marvel's Wolverine character on various monthlies and miniseries with this new book, launched in 2011 and spinning out of the events of the Aaron-written X-Men: Schism storyline, in which Scott Summers' long, gradual leaning toward increasingly radical tactics finally split the X-Men into two more-or-less antagonistic sides: That of Cyclops and that of Wolverine.

Aaron's X-Men team for this book consisted of Wolverine, Kitty Pryde, Beast, Iceman, Rachel Grey, Husk and, um, Doop, but the title featured two pretty drastic deviations from the bulk of the other X-books.

First, the heroes weren't running around having superhero adventures (that happened in the many other X-Men books, many of which featured these very same characters), but were instead running a school for teenage mutants. At Charles Xavier's urging, Wolverine opened the Jean Grey School For Higher Learning, built on the ruins of the original Charles Xavier School For Gifted Youngsters, where the X-Men character who seems the least suited to acting as a role model or teaching and shaping young minds is now the headmaster.

And, secondly, it was something of a sitcom based around that premise. It was a comic comic book, a comedy with some superheroic elements around the edges, rather than a straight superhero action/adventure fight comic with some comedic elements.

The first three-issue arc, which makes up three of the four issues in this first collection of the series, features the first day of the school's opening, in which Kitty and Wolvie are worriedly awaiting the arrival of a pair of inspectors from the New York State Department of Education, to greenlight the new school. Beast has designed and built the new campus into a high-tech, sci-fi facility—Aaron writes Beast as a sort of manic, mad scientist; Reed Richards on seven espressos. These inspectors function as the point-of-view characters, introducing readers to the grounds, the teachers and the students.

This is the point at which the major antagonists of this early portion of Aaron's run decide to attack, the previously-introduced, tween version of The Hellfire Club (even the villains in Aaron's Wolverine and the X-men are "funny" villains; super-rich, amoral pre-teen versions of your typical Marvel evil corporate raider type, including a descendent of the public domain Victor Frankenstein, who arrive on a hill over-looking the campus in their flying limousine).

They attack with a variety of mad-science weapons, including a mutant descendent of Krakoa (the sentient island that figured heavily in the somewhat controversial, retconned action of X-Men: Deadly Genesis), an army of Frankenstein's monsters with flame-throwers and by transforming the school inspectors into monsters (a wendigo and a sauron, to be specific).

Naturally, the good guys win, but they do so mainly via the assistance of Quentin "Kid Omega" Quire, the bratty punk rock mutant student from Grant Morrison's millennial New X-Men run (particularly the "Riot at Xavier's" storyline), a run that heavily informs Aaron's set-up for the series. Quire manages to turn Krakoa—who is itself a sort of mutant—to their side by acknowledging his/its feelings and giving he/it a sense of inclusion.

While the student body includes some pre-existing, carry over characters—Blindfold, Glob, Armor, etc—the students Aaron focuses most of his attention on are new ones who share something in common with Kid Omega: Bad guys learning to be good, which gives the school something of a reformatory feel.

Not only has Wolverine talked Captain America into remanding Kid Omega into his custody, other students include a mutant brood named Broo, a brash Shi'ar prince called Kid Gladiator and, before this volume's over, Krakoa and Genesis, a clone of Apocalypse taken from an X-Force adventure (He joins in issue four, along with an amnesiac and strangely powered Angel, currently having long blond hair, not-blue skin and metal wings, a state he was put in during an X-Force storyline).

Visually, this first volume isn't as strong as it could or should be, given the contributors. Chris Bachalo is billed as the primary artist, and while his highly-stylized designs and line-work, and his smooth and round figures make hims pretty ideally suited for young characters and comic book comedy, it's maybe not the best introduction to a brand-new, rather chaotic setting (parts of the school are made out of ice, parts made of brick and mortar, parts of floating metal, the "Danger Room" is now everywhere, including the restrooms, for sneak attacks, etc).

The action component of the storyline is so chaotic—essentially, the school's grounds come to life and try to devour all of its inhabitants, from every direction—and among the X-Men's responses are for Iceman to create a small army of Icemen, each of which looks different, that Bachalo and company cross the line between energetically confused and urgent into just plain confusing. It probably doesn't help that it is Bachalo and company, and not just Bachalo: Duncan Rouleau and Matteo Scalera help pencil issue #3, and there are seven inkers on the first three issues, including Rouleau and Scalera.

The book really starts to find its groove in the fourth issue, with the introduction of mostly-regular artist Nick Bradshaw, whose style is smooth, clean, stately and ordered, compared to the ink heavy, jittery work of Bachalo (there is some common ground in their character design, but that's about it).

Bradshaw's highly-detailed work recalls that of Arthur Adams to a degree, and while it takes a bit of getting used to after Bachalo's introductions to the cast—his handsome, smooth-chinned Wolverine especially caught me off guard after seeing a few issues of Bachalo's more feral, hairy version—Bradshaw does an excellent job of establishing all of the characters and the settings, in a way that it would have probably helped in the earlier issues of the series as well.

A sort of deep-breath issue, #4 not only introduces Bradshaw, but the new, new students—Genesis and Angel—and introduces a rather mundane conflict (What are the X-Men gonna do for funding, if they have to rebuild the whole school after the first day?) and a rather bizarre one (Kitty Pryde becomes mysteriously seven months pregnant practically over night).

This is such a different take on the X-Men, that it is hard to imagine it ever being the take on the X-Men, but because Marvel has such a huge line of X-books, there was an unexploited niche this book could claim as its own. If you want mutant superheroes fighting each other, debating politics and mulling over their byzantine continuity, there are plenty of books for that. This is the big, crazy, funny X-Men comic.
Posted by Caleb at 8:02 PM

I really enjoyed Wolverine and the X-Men. If you are going to have so many X-Men titles, they may as well have different tones.

I love this comic too. It is genuinely funny and clever.