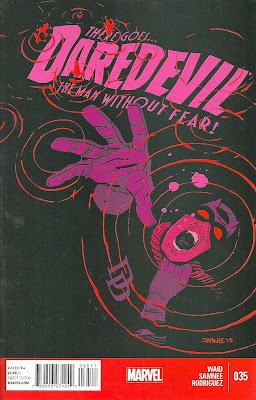 Daredevil #35 (Marvel Entertainment): This is the penultimate issue of the Mark Waid run on Daredevil, much of which has seen the writer collaborating with artist Chris Samnee, before Marvel cancels the book and replace it on their schedule with...Daredevil, by Mark Waid and Chris Samnee, the main difference being a lower number (#1, instead of #37) and a higher cost ($3.99, instead of $2.99).

As such, it seems to be the beginning of Daredevil's last battle with the Sons of The Serpent over the New York justice system, as well as the possible climax of Foggy Nelson's cancer battle. The Sons have temporarily saved Foggy by giving him illegal drugs and treatment, and have blackmailed both Daredevil and Matt Murdock into doing something he finds extremely unsavory: Defending the innocent son of a Son of the Serpent (I think Jimmy Buffet sang a song about this) in court from charges he wasn't guilty of...but other Sons were.

Should Ol' Horn Head do the right thing for the wrong reason, or the wrong thing for the right reason? This is the dilemma he's struggling with when he asks Elektra to spar with him to help him think, and they run into two snake-themed villains to beat up instead (I really like Samnee's redesign of Constrictor, if he's the one who re-designed that not very good looking costume into the scary and formidable, more serpentine armor seen here).

DC Universe Vs. Masters of the Universe #4 (DC Comics): Since I've been devoting full posts to reviewing each new issue of this title as they come out, I suppose I should do the same with the fourth issue, even though I bought so few comics this week that this particular installment of "Comic Shop Comics" is marshmallow-light.  Suffice it to say that in this issue, the Justice League of America fight some Masters until the Justice League Dark stops them from doing so (via more fighting, of course), and most everyone gets on the same page regarding who the real villain is—Orko, of all people—and decide that they should probably start fighting him for what's left of the series, rather than one another.

As for the quality, it remains extremely, shockingly low; probably closer to "dismal" than "terrible." 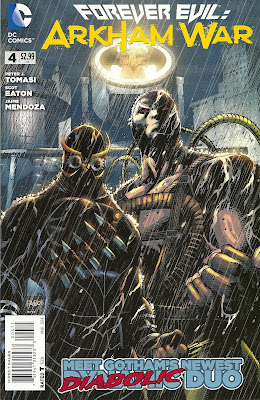 Forever Evil: Arkham War #4 (DC): Yes, this actually came out last week, but I didn't get it until this week (my copy of Scooby-Doo Team-Up #2 from last week hadn't arrived yet, though, nor did this week's copy of Classic Popeye. Woe is me).

I'm afraid I don't have anything nice to say about it, as it sort of stopped making sense to me the minute Bane started dressing up like Batman. In this issue, he's still wearing a make-shift Batman costume, despite not really looking much of anything like Batman, given his titanic size and the fact that his Batman costume consists of a helmet with bat ears, a cap and an anvil-sized metal bat-symbol on his chest. He looks as much like Batman as The Hulk looks like She-Hulk, really, although pencil artist Scott Eaton does have him strike a vaguely Batman-like pose here and there.
So, in this issue, Bane wakes up his last remaining Talon, William Cobb (The Talons are the Court of Owls' undead assassins, which were being stored frozen beneath Blackgate Prison, and which both Bane and the Arkhamites want to use as weapons against each other; just in case you haven't been reading Batman comics of late or this series so far). Cobb recognizes Bane instantly as Bane, despite Bane's Batman costume, and together the two run off to fine the same goddam fight between villains that's been going on for four issues still going on.

While Bane and the Talon are both accomplished killers, and while pretty much everyone on either side of the "Arkham War" are killers with high body-counts, it doesn't really look like anyone ever kills anyone in this war. Like, Firefly—whose New 52 design is barely legible; he just looks like coloring effects now—sets The Reaper on fire, but then the Reaper stabs Firefly in the chest with a scythe, and they both seem to live.

When Bane and the master assassin Cobb appear, they don't seem able to actually kill anyone either. Cobb sets someone named Sumo on fire and says, "One down... ...an entire asylum to go!", but Sumo is still upright and clutching his face, so presumably he's not down-down. Cobb then fights Black Mask, The Cavalier and a characters I think are meant to be Nocturna and The Key, although I think it's a pretty safe bet he doesn't kill any of them either. He's a pretty shitty killer, really, which makes one wonder why everyone wants Talons on their side.
Bat-Bane and Cobb eventually make off with Mr. Zsasz, who Eaton draws pretty far off-model, in
order to torture information regarding Scarecrow's whereabouts out of him (I'm 100% positive these two ruthless, cold-blooded killers won't kill Zsasz either), and then we see what The Scarecrow is up to: Pumping the remaining Talons full of fear gas and installing Mad Hatter mind-control gizmos in their cowls (sadly, they're not wearing top hats and sombreros and derbies atop their owl costumes) so that they will serve the Arkhamites, and he sets them off to fight Bat-Bane...next issue!

I'm afraid I can't make heads-or-tails of anyone's motivations in this series, the stake-less action is the equivalent of a cartoon fight cloud of gray dust, with fists and stars and curse words emanating from it, and the drawings are mostly goofily terrible.

I did like this single image of The Mad Hatter fighting a guy who looks like Major Bludd on venom, all dropping what I assume are weaponized hats... 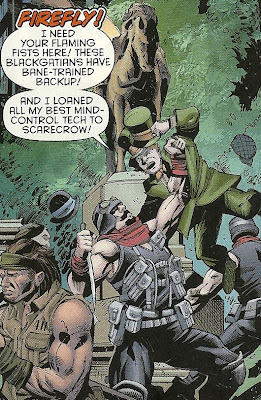 Mostly dissapoingting this week, I see.

Daredevil was fabulous, but man oh man, this whole "Forever Evil" stuff just drones on and on and on and...well you know.

Caleb, have you considered running a fashion column critiquing capes? Because I've quite enjoyed your recent run on analyzing superhero costumes.