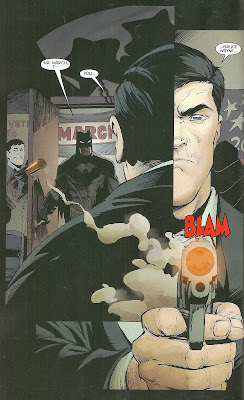 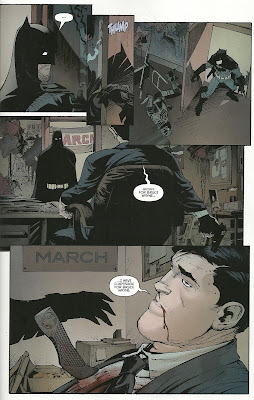 The Scott Snyder/Greg Capullo creative team has enjoyed enormous, even remarkable popularity since they started producing DC's Batman title on a monthly basis in late 2011, as part of the publisher's "New 52" line revamp. Sales of the title are still higher than they've been in a long time, and it's the publisher's best-selling book, month in and month out. It's also garnered a lot of praise, which may not mean as much to a Big Two bookkeeper, but is generally a good sign of how popular and how good a book actually is: For the most part, fans love the Snyder/Capullo Batman, and comics critics seem to like it as well.

I'm no different. As a fan and as a critic, I have to confess that it's generally a very good, very well-made comic book. Snyder's Batman hasn't been as full of big ideas as Grant Morrison's, but then, few writers inject ideas into their superhero scripts the way Morrison does; Snyder's has read the most like the "real" Batman for a long, long time now, and the writer obviously gets, likes and thinks through the character and the character's cast.

Capullo does good work, too. He's not my favorite Batman artist of all-time, nor was he even the best drawing the character in the few years since he assumed the role on the flagship (Batman, Inc's Chris Burnham and Batman and Robin's Pat Gleason are both hard pencillers to beat; hell, I think Becky Cloonan's short contributions to the trade paperback I scanned the above pages from is likely superior to Burnham's on a technical level and, subjectively, more aesthetically pleasing to me personally).

But he's definitely a good artist, and were we sitting in judgement of DC's current creative stable, dividing the goats from the lambs (to use a blasphemous metaphor), then Capullo goes with the lambs.

But the Snyder/Capullo team isn't perfect. I've been following their run primarily through trade collections, and this week I read Batman Vol. 2: The City of Owls, which is actually the second time I saw the above sequence (much of this particular trade was previously collected in Batman: Night of the Owls, a massive collection including key chapters from Batman and the many Batman spin-off comics).

There were a few examples in their first trade collection, The Court of Owls, that seemed a little off to me, but the above sequence, inked by Jonathan Glapion, is an all-around, downright poorly executed sequence. It comes from Batman #9.

Go ahead and reread it, and then we'll talk about it.

For context, Batman has just fought off a full-scale invasion of Wayne Manor and the Batcave by the undead assassins from The Court of Owls, who now know he and Bruce Wayne are the same person. The Court's assassins were meanwhile attacking prominent Gothamites all over the city, and Batman has just raced to the office of mayoral candidate Lincoln March to try and save him.

That first page has just two big, overlapping panels. In the first, we see a flying shell casing and a cloud of smoke, suggesting a gun has been fire in that panel, in that moment...but it's actually fired in the next panel, in the next moment. Capullo simply drew the cloud of gunsmoke and the shell casing fired in the second panel overlapping the first panel. In other words, the two panels overlap one another, the artwork blending together to confuse when exactly a pretty important action—March firing a gun in Batman's direction while saying "You...Bruce Wayne..."—is actually occurring.

The second page doesn't have anything quite as egregious as the first panel being slid between two planes of the second panel, but it's still not told particularly well. As is revealed in the first tier of panels, there was actually a Court assassin hiding behind the door that Batman just opened, and March was shooting at the owl, not Batman, but, if you compare the two pages (and they were on facing pages within the book), the mechanics of it don't really work out, as Batman's holding the door open, covering the assassin, up until the point at which the assassin hits the ground (and there's no hole in the door indicating March, who wouldn't have really been aiming quite correctly, shot the assassin through the door).

Oh, and he's also got a huge knife stuck in his chest, something that is mean to surprise the reader, who can't see that part of March until that reveal panel, but the only reason we can't is because on the first of those pages, Capullo covered the knife wound with another panel. It's not clear why Batman doesn't notice immediately, as he is looking directly at March when he walks in the door, and doesn't seem to be surprised by anything until he hears his secret identity spoken and a gun goes off.

I'm not a fan of the Snyder/Capullo run.

Gave the first volume a taste and was pretty happy with it, Snyder's needless swipes at/from Morrison's run aside-- mocking Professor Pyg as a second-rate villain in the opening scene / yet appropriating the Black Glove m.o. & plot for the Court of Owls... The art appealed to me particularly, more than Capullo had done in years! That is, until Bats was confined to the labyrinth. At which point I started having the same problem you're describing, layout-wise; moments when Capullo either got sloppy or too clever, a la JHWIII's moebius layout in Promethea, or Fábio Moon doing the double-page spread in Gula 2: the reading order went wobbly.

It was at that point my suspension of disbelief began to falter. It failed when Wayne acted *completely* out of character by punching Dick Grayson to knock out a Clue Tooth. In subsequent scenes he was pompous & self-absorbed to extreme distraction, to say nothing of condescending. Bruce can be a dick, sure, but damn. NOT MUH BATGOD, as the kids say.

(You know my feelings on the Nu Clown Prince of Grimdark.)

I'm glad you enjoy it, but the appeal of Snyder eludes me.