The evolution of Evil Star 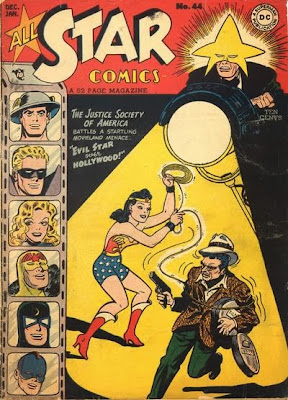 Golden Age villain Evil Star, a criminal with a star-shaped mask that tried to sabotage a Hollywood film. 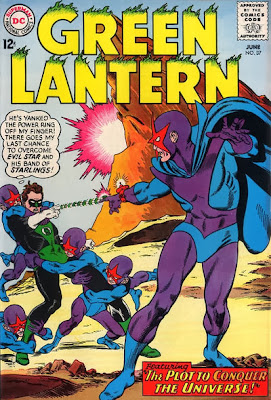 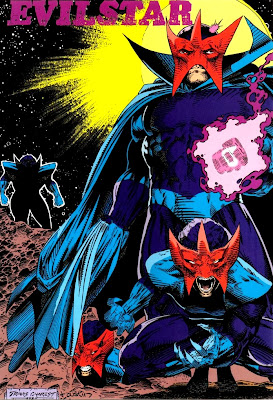 A more modern drawing of the same essential version of the character, drawn by Travis Charest. 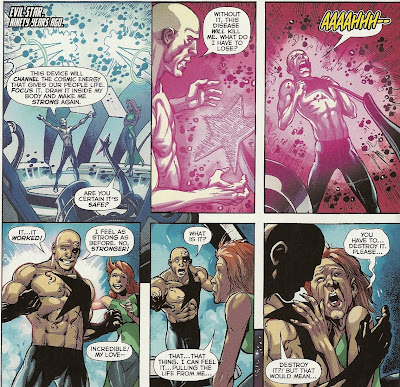 And the new, New 52 version, introduced in Green Lantern Corps Annual #2, in the above passage drawn by Tom Derenick (and written by Van Jensen and Robert Venditti).

He's still evil (or at least a pathologically selfish coward), and he still has a star symbol on his person, but, purely in terms of appearance, he's less colorful, less dramatic, less recognizable and all-around less interesting.

The bland redesign is, like so many of the the New 52, counterintuitive of the stated goals of the line-wide reboot and redesign—to make DC's comics more accessible and appealing to a bigger, broader audience—when one considers that, as goofy as the costume the guy wore for 35 years was, it did show up in a couple of cartoons, meaning it was seen by hundreds of thousands of more people than Green Lantern Corps Annual #2 will ever be seen by (A coupla episodes of Justice League Unlimited, one of Batman: The Brave and The Bold and an old Green Lantern short of sub-Super Friends quality from long, long ago).

The new look does seem to meet what seems to be the actual goal of the reboot-born redesigns: Creating more "realistic" characters and costumes that could be more easily adapted into live-action films, television or Arkham-style video-games.

This almost fills the costume-crit-column hole in my soul, Caleb. Almost!

(I had almost forgotten how stiff & strange Charest's early work was compared to his subsequent stultifying struggle with photorealism...)

What I find most ridiculous is that they go to these great lengths to dull him down and make him more "realistic", but it's still a guy called "Evil Star" of all things.

Also, the page reads like a parody of silver age-ish comics writing. Is it supposed to be like that or did the writer just not realize how goofy the dialogue is? I haven't read this book, so I don't know the context, and I'm genuinely curious (but not curious enough to waste money on it). The prominent kirby dots would suggest yes, but the rest of the art suggests no.