Review: Wolverine and The X-Men Vol. 2 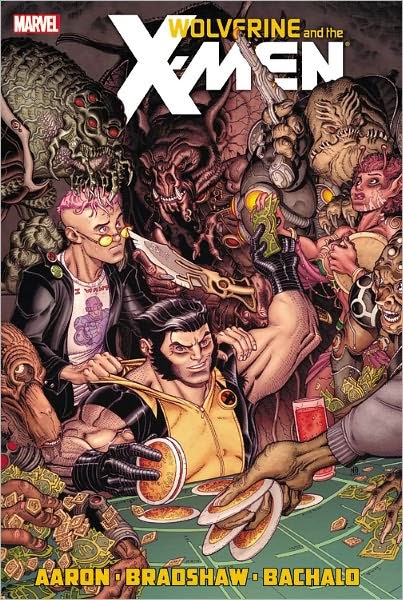 According to the fine print on the title page, the name of this book is actually Wolverine & The X-Men By Jason Aaron Vol. 2, a title which undervalues the artists to the point of ignoring them (which is something of a convention among Marvel's trade program, as ...By Some Writer Or Another tends to appear in a lot of their collection titles) and is at this point a meaningless distinction, since the only Wolverine and The X-Men book has been written by Jason Aaron (the distinction will become more important later this year, when they begin collecting the rebooted Wolverine and The X-Men, which will be written by Jason Latour starting in March).

I'm going to just stick to calling it Wolverine and The X-Men  though, as that's what it says on the cover (And, besides, as great a writer as Jason Aaron might be when it comes to this sort of thing, it's pencil artist Nick Bradshaw that really makes this series sing, and he draws three-fourths of this slim collection of four issues (Chris Bachalo draws the final issue).

With the basic premise of the series and its core cast nailed down in the previous volume, this one focuses on two of the teachers and two of the students, and their relationships.

The Bradshaw-drawn portion opens with the board of Worthington Industries stripping CEO Earren Worthington III, aka the now amnesiac Angel, of his power (and funds) due to his clearly having gone a little Looney Tunes, drying up a potential source of revenue for Wolverine's cash-strapped school. Meanwhile, Professor The Beast is taking a class shrunk to microscopic size on a Fantastic Voyage tour of the mutant body, to let readers now that shrinking X-Men down to microscopic size and inserting them into a mutant body is a thing Beast can do just in case that comes up later in the story.

And, as it turns out, it does! Wolverine takes Kid Omega with him to a space casino, where he hopes to have the young mutants psychic abilities allow him to cheat the house and win enough space money to keep the school doors open, and while those two are off causing trouble in space, trouble from space visits the school, in the form of the millions of microscopic Brood aliens filling Kitty Pryde's apparently pregnant belly and a big, scary alien scientist, who is visiting the school to exterminate Broo, the mutant Brood alien (Beast and the X-Men fight the teensy Brood horde inside Kitty, while she and Broo face the big, scary alien outside her).

It's the sort of storytelling Aaron excels at—ideas and action so big and crazy they are more than a little bit silly, but with the characters embracing and reacting to it with either deadpan serious acceptance or the sort of winking commentary that lets readers now that the super-people, like their writer and their audience, is aware of how this all looks. It also gives Bradshaw his most ample opportunity yet to show off his design skills, as he not only gets to draw the many and varied characters of the Jean Grey School for Higher Learning, but also all sorts of aliens and space ships and whatnot...and not a corner of a panel looks the least bit phoned-in. Bradshaw is drawing his fingers off in this series.

Which might explain why he's not drawing every issue (That, or perhaps Marvel was publishing it more-than-monthly? Now I don't remember how long ago they started doing their randomly accelerated publishing schedule on books that weren't Amazing Spider-Man).

The Bachalo-drawn fourth issue is more-or-less an epilogue, with Wolverine finding himself (extremely) temporarily confined to a wheel chair ala Xavier thanks to a blast from an alien weapon that mangled his legs beyond his healing factor's ability to mend, and the kids going to the casino to beat the hell out of it. Meanwhile, Sabretooth and Beast fight in space at the S.W.O.R.D. headquarters, with Beast and Agent Abigail Brand eventually winning the day after getting their asses kicked pretty hard (and after lots of SWORD extras get killed, mostly off-panel).

The shift in tone is just as dramatic in the shift in art styles, going from Silver Age zany to Dark Age melodramatic in the space of an issue, but the X-Men are a big and varied enough container that they fit all that and more...especially the way Aaron writes them.
Posted by Caleb at 6:21 PM

There is something really funny how they resolve the "Money problem" with a simple one panel explanation.