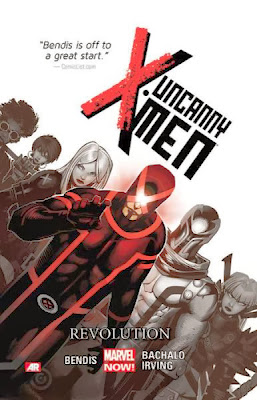 Shortly after launching All-New X-Men, the Brian Michael Bendis/Stuart Immonen series in which the modern day Beast used a time machine to bring the original, teenage X-Men into the present in an attempt to confront the radicalized modern Cyclops, Marvel relaunched Uncanny X-Men, with Bendis writing that book as well. The two Bendis books essentially became co-flagships for the moribund franchise—i.e. the important books, where the current X-Men story was actually occurring—with All-New following the time-displaced X-Men and the main X-Men team at their Jean Grey School headquarters, while Uncanny followed Cyclops, Magneto, Magik, Emma Frost and the few students they were so far able to recruit for their rival New Xavier School.

The set-up, it occurred to me while reading this, is nearly identical to that of Bendis' writing of the Avengers franchise shortly after Marvel's Civil War event, with New Avengers featuring a rebel, outlaw team of superheroes, and Mighty Avengers featuring the "establishment" team, supposedly bent on bringing the former team to justice (although I lost count of how many times the two teams met, exchanged argumentative words, and went their separate ways without anyone ever actually fighting or arresting anyone).

Here things are reversed though, as the establishment team of Wolverine, Beast, Storm and the Jean Grey School representing Charles Xavier's philosophy of peaceful coexistence with humanity, while Cyclops team includes the former leader of the Brotherhood of Evil Mutants, and, during Avengers Vs. X-Men, Cyclops, Emma and Magik were essentially supervillains, and are now preparing for an inevitable race/species war with homo sapiens.

This time around, then, the rebel super-people are the bad guys—but not so bad that, like Bendis' Mighty Avengers, they can't also star as protagonists in their own book.

This volume contains the first five issues of the series—and 20-pages of backmatter, including costume designs and variant covers—four of which are drawn by longtime X-Men artist Chris Bachalo and the fifth of which is drawn by Frazier Irving. No complaints on the artistic talent involved then, although the pair are each so highly stylized and individual to their approach to comics art that their stories don't exactly match very well. 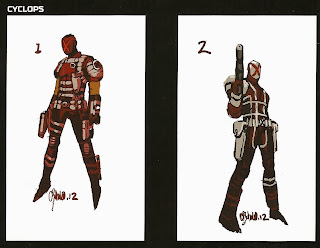 The book opens with the "Uncanny" team in their new costumes, which we previously saw in All-New X-Men Vol. 2, including Magik and Emma "The White Queen" Frost's black costumes, with matching tiny black booty shorts and thigh-high boots, Cyclops' super-busy new X-faced costume (which coulda been much worse; see above) and Magneto's new "summer" costume, all-white with short sleeves. There's no indication or explanation as to why they changed clothes, which is fine, I suppose, but these mutants are so damn busy, it seems an odd thing to devote time too.

Not only are they recruiting the new mutants that are emerging all over the world (Here adding another, codename-less mutant to their freshman class of codename-less Benjamin Deeds, healer Triage and time-stopper Tempus, all introduced in All-New), they're secretly building a school in the ruins of the old Weapon X facility and they're also dealing with their newly wonky powers, which were damaged by exposure to the Phoenix Force (in Avengers Vs. X-Men; this isn't terribly new-reader friendly, really. Not only does it build on the plot of that crossover/event series and the first issues of All-New, it also assumes a degree of familiarity with some of the characters, like Magik, whom I could tell you almost nothing about other than that she spells her name wrong and that she apparently also turns into a demon whose name is also spelled wrong. Oh, and she's Colossus' little sister, which I only know because I distinctly remember the voice actor who played Colossus shouting her name in Russian-accented English in that shitty-but-awesomely-so '90s cartoon).

The new mutants serve as our point of view characters, as Bendis and Bachalo walk us through a variety of melodramatic plotlines, including the trust issues between the various Uncanny teammates, relationship issues and, finally, in the Irving issue, an A-plot involving Magik and a Dr. Strange villain.

They also fight The Avengers (And win! Sorta!), in one of those Mighty/New Avengers confrontations that is essentially just a bunch of talking, capped off with an almost-fight (Tempus freezes the Avengers in a time bubble and the X-Men scramble).

And we see the same actions from an issue of All-New, in which Cyclops travels to the Jean Grey school to ask if any of the students want to join them (this issue, we focus mainly on Emma's psychic conversation with her former star pupils, the Stepford Cuckoos, while the action of All-New occurs in the background, often in black and white, which is a neat touch). 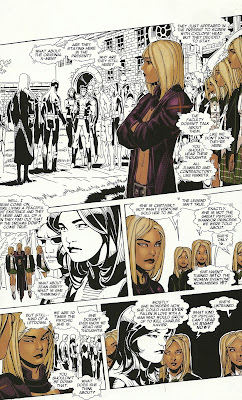 I was happy to see this volume spoils the cliffhanger from All-New Vol. 2, revealing which member of the original, time-displaced X-teens leaves his teammates to sign up with Cyclops team.

This book so far seems to be closer to stereotypical Bendis than All-New, with several long passages of conversation dominating issues, with Magento giving Maria Hill a long spiel, Captain America having a speech off, Tempus reminiscing at length about a school presentation she gave about admiring Capt, Emma and Cyclops talking about their relationship, and Emma arguing with the Cuckoos.
The art is strong, and it's worth noting that Bachalo manages to de-emphasize the sexuality of the rebel characters much more than in Immonen's All-New (Compare the two images of the Cyclops' team appearing at the Jean Grey School above).  How, exactly, did Bachalo pull that off? I keep looking back and forth between the images. Part of it seems to be that Immonen's Emma and Magik show slightly more skin, although the costumes are the same (Bachaclo leaves less space between boots and shorts, his Emma has less torso exposed). Part of it seems to be the poses and positions of the two X-ladies. I think part of it too simply has to do with the fact that Bachalo's costumes look more like material, like cloth or armor fitted over a human body, than paint applied to a nude form. (Compare their drawings of Cyclops; Bachalo's looks like a man in a costume, whereas Immonen's is wearing a material tight enough to fit around the differring contours over every bulging muscle). This surprised me mainly because I consider Bachalo the more "cartoony" of the two, with Immonen's figures hewing closer to representational than Bachalo's, but, at least when it comes to clothing on super-people, I guess Bachalo actually draws more realistically.

He also does a pretty good job of differentiating the characters' faces, particularly the male characters, and I do prefer his tall, skinny version of Scott "Slim" Summers to the more generic ripped guy in Immonen's image.

Both Immonen and Bachalo have their strengths and weaknesses of course, and both are pretty incredible artists, so I've got to asssume that Bendis, Marvel and X-Men fans are all pretty happy with the way the franchise's core books are looking these days.
Posted by Caleb at 5:36 PM

Wow, you weren't kidding that Cyclops had some pretty terrible looking sketch designs.

Re: desexualized Bachelo--
He's always been rather good at that. I first encountered Bachelo's work in Sandman & Shade (see also: The Children's Crusade bookends to that Vertigo crossover Gaiman scripted) and instantly much fell in love with his eccentric-yet-casual style.

Shade was among the sexier of the Vertigo books in terms of content, yet there was zero exploitation whenever Chris had center stage. An accomplishment, considering the ease with which Bachelo's work lends itself to full-page spreads & showcase shots, but that's our man: he draws women simply & well without ever denigrating his subjects to being pin-ups. A body is a body is a body, his pen seems to say. Generation X wouldn't have been worth buying without him. It certainly wasn't after he left...

I honestly wish he'd go back to doing his own stuff or at least work that wasn't X-centric, but I'll take what I can get.