Review: Secret Avengers: Run the Mission, Don't Get Seen, Save the World 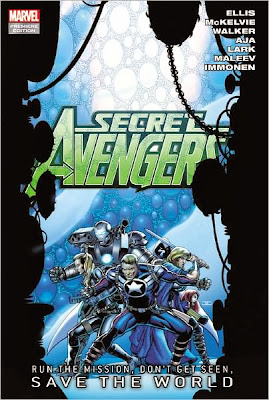 This book is one of the many books I fully intended to buy in trade form, that I saw when the component issues were being released serially and thought to myself, "I'm going to write that down on my To Buy list and get it when it's in trade," and then, as the months passed, my interest waned and I saw that I can read it for free from the library, and do I really need to own it? Wouldn't I be just as happy reading it once? And if it does turn out to be the sort of thing I want to read over and over again for the rest of my life, well, I suppose I can buy it at some point in the future (Or, actually, I guess I can keep borrowing it from the libraries).

I've found this happens an awful lot with Marvel trades, as so many of their comic books are so expensive I see little point in reading them serially, and it's always going to be easier to buy a new comic on a Wednesday afternoon when you see it there looking at you then six months later, when you have to remember and order it, you know?

Anyway, Run the Mission, Don't Get Seen, Save The World collects a nice, short, economical run on the title Secret Avengers—the espionage-oriented book of the ever-growing Avengers line, essentially taking the Ed Brubaker corner and established tone of the Marvel Universe and having Captain America Steve Rogers and hand-picked teams run missions, each of which is a done-in-one adventure, and each of which is drawn by a different artists, many of whom aren't artists one would expect to find on a monthly Avengers title.

The six issues are from 2011, and pair Ellis with Jamie McKelvie, Kev Walker, David Aja, Michael Lark and Stefano Gaudiano, Alex Maleev and Stuart Immonen and Wade Von Grawbadger. Each features the sort of high-concept, pseudo-science based on real science plotting that Ellis is known for, as well as generally clever plot construction and execution. Characterization is, for the most part, kept to a minimum, and most of the characters involved talk in brusque, professional and interchangeable dialogue, with notable exceptions being the X-Men's Beast, Hank McCoy, and the unstable, crazy Batman of the Marvel Universe, Moon Knight.

This was from a time in the ongoing Marvel Universe saga in which Steve Rogers had come back to life after his assassination via time bullets or whatever, and his former sidekick Bucky was still serving as the official Cap, while Rogers was wearing a mask-less costume, using an energy shield and going by either Commander Rogers or The Commander, having taken over the role of SHIELD Commander and Boss Of All Superheroes (this being from the period in which who held that role defined much of the Marvel Univere's ongoing story, as it changed hands from Maria Hill to Tony Stark to Norman Osborne to Rogers).

If there's an ongoing storyline here, it involves Rogers and his agents fighting The Shadow Council, I think it was, one of the many, basically interchangeable anti-SHIELDs of the Marvel Universe.

In the first issue, Rogers, Black Widow, Moon Knight and Beast infiltrate an abandoned secret city hidden underneath Cincinnati, only to find that it's been reoccupied and put to an awesomely ambitious and bizarre usage. This is probably the strongest of the issues, in part because of McKelvie's clean, smooth, expressive artwork (although his Beast is kind of lame, looking a little too much like a dude wearing a cat-mask; I don't think model sheets for Beast have existed at all in the 21st Century, given the fact that every artists draws him differently; in this volume alone, he looks like at least three different characters entirely), but in larger part because of the scale and stakes of the plot, and the amount of characterization and interaction Ellis manages to pack into this one. Only Rogers comes out as a basically blank slate.
It also features some really goofy "flechette" guns that shoot non-lethal icon-shaped projectiles. Rogers' shoots out little Captain America badges, while Moon Knight's shoots out little crescent moons.

Next up, Rogers, Sharon Carter, War Machine and Valkyrie seek to solve the mystery of a villager-abducting ghost truck, featuring nice expressive art by Walker; then Rogers, Carter and Shang-Chi attempt to stop a version of Captain America's most visually-interesting foes from importing and weaponizing transmatter from a bad continuity (explained by Beast in flashback), as drawn by Aja, who does some rather magnificent, Escher-like lay-outs, in which the characters savagely battle in panels with no gravity or sense of up and down.

As for the second half of the book, Rogers, Carter, Black Widow and Moon Knight (wearing his mask with a white suit, for a nice formal variation of his costume) infiltrate a hotel where a drug dealer is selling powdered Lovecraft creature bones as a power-up drug (this is the Lark/Gaudiano ish; sadly, Lark only does breakdowns); there's an incredibly complicated story in which Black Widow must jump back in time to save her dead teammates without letting anyone know (drawn by Maleev, whose Beast looks like the Kelsey Grammer one from the third X-Men movie),
and, finally, a pretty cool story in which Rogers, Carter, Widow, Valkyrie, War Machine, Moon Knight and Beast infiltrate and ultimately destroy a building with some terrible, world-ending secret creatures in the basement, the day being saved with some inspired uses of Marvel Universe techonology (including War Machine flying an elevator car with his rocket boots and Beast creating a fake, building-engulfing inferno to empty the building).
That's the Immonen-penciled story, making this issue something of a Nextwave reunion and a perfect note for Ellis' short run to end on. I'd rather highly recommend this as a continuity-light introduction to Ellis at his work-for-hire best and/or a handful of some of Marvel's less-prominent super-characters and/or the work of a half-dozen creators or so who have bodies of work well worth tracking down if you like what you see of them here.

In their annual re-examination of the year that was in Big Two super-comics and media tie-ins, Robot 6's DC Comics expert Tom Bondurant and Marvel Comics expert Carla Hoffman touched on Tom Brevoort's arguments that numbers don't matter when it comes to comics.

There seem to be three different Secret Avengers comic book series released in the course of the last few years—oh, and there's an unnumbered Fear Itself: Secret Avengers in there too, just to make things more confusing—each with their own volumes 1, 2 and/or 3. A comic shop with a knowledgeable seller of comics could no doubt help walk a curious reader through, but if I were looking to buy these online or borrow them from the library (and thus looking at an online library catalog), it would be fucking murder making sure I read them in the proper order, which is apparently something like Volumes 1, 2, 1, 2, 3, 1, 2, 3, with Run The Mission... and Fear Itself somewhere amid all those repeating volume numbers.

Surely numbering the damn things 1-10 would be a lot easier.

Worse still is when they change the titles along with the numbers. Like, I'm enjoying Mark Waid's Indestructible Hulk, having just finished Indestructible Hulk Vol. 2. But I understand they're relaunching the Waid-written Hulk title with a new title, just plain Hulk, which means Waid's run will like include something like three or four numerically consecutive volumes of Indestructible Hulk, followed by Hulk Vol. 1...?

I still haven't finished the Hercules run by Greg Pak and Fred Van Lente, because I started reading it in singles and wanted to switch to trades, but got lost as they kept changing the titles of the book they were writing and their Hercules was appearing in...
Posted by Caleb at 7:44 PM

Sounds like Global Frequency: Avengers, which isn't a bad thing.

Us knowledgeable sellers of comics can't keep all the numbering and renumbering straight, we sure don't have the time to track. It's a huge problem.

If I remember correctly, the David Aja issue was spectacular because it starred Shang Chi and a lot of Aja's panels was like a precursor to what he did in Hawkeye.