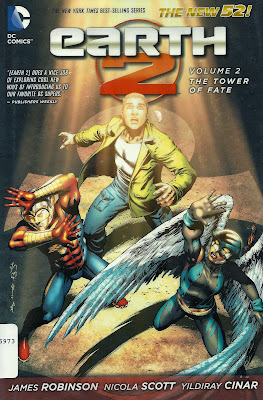 The second collection of the James Robinson-written, mostly Nicola Scott-drawn Earth 2 series collects the second half of the first year of the series, containing issues #7-12, plus the September 2012 #0 issue.      It's only at that end of that last issue that the "Justice Society" team starts to really coalesce, with four of the superheroes—Green Lantern, Flash, Hawkgirl and the newly-introduced Doctor Fate—deciding to stick together and set up a sort of headquarters. That makes it pretty clear that Robinson is—or, rather was—playing a rather long game with the plotting of the series, which, it turns out, ends up being to its detriment, as Robinson leaves the title just four issues after that, replaced by new writer Tom Taylor.

Whatever it was that Robinson was trying to accomplish then, he spent a lot of time getting there, without ever actually arriving. It should be noted, too, that this series has been rather confoundingly weird. The expectation was that, given the stars—Green Lantern Alan Scott, Flash Jay Garrick, The Atom Al Pratt, etc—it would be a sort of New 52 JSA title, set in modern times and on an alternate Earth from the one the rest of the DCU was set on.

It sort of is, but the setting varies quite dramatically from the real world. That is, it's not really the real world + superheroes, but a sci-fi, alternate history world + superheroes. The world is organized into a one world government, with a one-world army—the creatively named World Army—employing nasty, soldier versions of familiar DC Golden Agers—the aforementioned Atom, Wesley Dodds and The Sandmen, Terry Sloane—to hunt rebel superheroes like GL, Flash and Hawkgirl. The world was warped, deformed and depopulated by a full-scale invasion from Apokolips, one that killed some heroes and left Steppenwolf stranded on this world.

It's an unlikely fusion of Jack Kirby's Fourth World mythology and the old Golden Age characters of National Comics, as filtered through the now defunct, millennial JSA series that James Robinson helped found (and David Goyer and Geoff Johns continued in various combinations). I originally thought the use of the Apokoplyptian armies in the opening issues was meant merely as a way to compare and contrast Earth 2 with Earth-New 52 (as the new continuity's first comic, Justice League, opened with the League's founders rallying together to stave off an invasion by Darkseid himself), and as a way to kill of this world's Superman, Batman and Wonder Woman to make room for the second-stringers who would eventually star, but Robinson is apparently keeping the plot going indefinitely.

Issue #0 heavily features the Earth/Apokolips war, #8 is entirely devoted to Steppenwolf conquering the fictional country of Dherain, and there is a brief teaser appearance by Mister Miracle and Barda (apparently squeezed into the end of an issue just to give DC something "shocking" to put on the gatefold cover during what was once going to be called "W.T.F. Certified" month). At one point, the spirit of Nabu refers to Hawkgirl as a warrior of Horus, and indeed her helmet does look a little Egyptian in design, and with Fate, Flash and GL all endowed with magical powers here—Flash literally given the speed of Mercury/Hermes by the dying old god—I thought perhaps Earth 2 was setting up its heroes as the "New Gods" who would battle Darkseid and his evil armies, but that doesn't seem to be the case after all, as the conflict following this series seems to involve new, evil versions of the dead trinity (An evil Wonder Woman, Wondy's grown-up daughter Fury, is introduced here as Steppenwolf' thrall, fighting with a glowing red combination whip/noose).

So really, I have no idea what's going on with this book. As of the end of the second volume, it seems like it's still putting a team together, and is almost there, but I also know that the next trade will feature the end of Robinson's run...and maybe two godawful Villains Months one-shots (Earth 2 #15.1, the Desaad issue was, if I'm remembering correctly, one of the most unreadable of those issues).

So this volume opens with the zero issue, which is split between telling two stories narrated by Terry Sloane (The Golden Age Mr. Terrific, who is here some sort of ruthless Lex Luthor type whose superhero identity was Mr. 8, and Mr. Terrific II, who, post-reboot, is now the only Mr. Terrific, and has bounced between Earth 2 and Earth New-52 in a way that confuses me). I honestly couldn't make heads or tails out of the second story, which is especially weird in that a) I read the previous volume of this series and b) it was a #0 issue, and meant to explain things to new readers and serve as a good jumping-on point.

From there we get a check-in-with-our-heroes story and then the introduction of Steppenwolf and Fury, and then the title story actually starts, with Nicola Scott's art finally appearing in this volume. The World Army, Atom and Dodds go after Jay Garrick's mom, and he rescues her with the help of Khaled, a young student who discovered the Helm of Fate on the same mission that gave Hawkgirl her wings, and a young, handsome version of the green-skinned Wotan.

Wotan summons the trio to Nabu's realm, where the Tower of Fate is, and commands that the Khaled and the Flash retrieve the Helm for him. Khaled reluctantly finds and then dons the helm, becoming New 52 Doctor Fate, and then he has to fight Wotan.

The title story in this collection is actually pretty good, and Robinson and Scott reinvent aspects of the Fate story in interesting ways, including rebuilding Fate's Tower into something spectacular (and very different) looking, and putting a guardian monster in it, one with a twisted set of horns of various sizes forming a sort of crown atop its head. The insides of the tower is still Escher-like, but filled with all sorts of classical and ancient architecture, not unlike George Perez's version of Olympus, only drawn-out into a rectangular box, rather than a sphere. Scott's are on one spread of the tower interior—reproduced in the backmatter as pencils only—is so intricately drawn, it seems a shame they bothered coloring it at all, and one wonders what a black-and-white Nicola Scott book might look like.

Their Fate is pretty well conceived (Kent Nelson is involved, even if, like Hawkgirl, he's no longer the person under the mask and using the codename), and seems like a strong enough concept to carry his own title, if they ever start spinning solo books out of Earth 2. 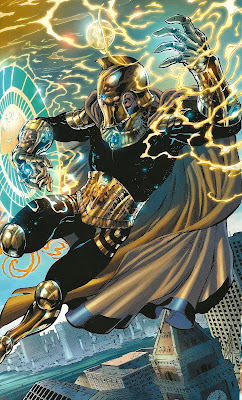 I'm not crazy about the costume design, in which the blue and gold are now black (with a bright blue starfield that seems to come and go) and highly-polished, ornate gold accessories that reflect light and the images of objects and people close to them. In other words, it's a little busy, and far too realistic, but, compared to the way a lot of New 52 redesigns have turned out, it could have been a lot worse (And, in fact, there have been worse Fate designs. It was a reminder, however, how weird it is that DC didn't ask Alex Ross to redesign their line rather than Jim Lee; his Kingdom Come Doctor Fate was one of the man great redesigns in that seminal series, in which most of the Golden Age characters came out looking better than most other attempts to update them. Take it's Mercury's helmet-wearing version of The Flash and compare it to Earth 2's Flash, for example).

While Scott pencils the four-issue origin story of the new Doctor Fate (and Trevor Scott inks it), the earlier chapters of the book are from a variety of fill-in artists of generally inferior skills. Tomas Giorello (whose Wonder Woman's skirt won't stay down and chest-plate just barely stays up) and Tom Derenick split the zero issue, while Yildiray Cinar pencils #7 and #8 (Trevor Scott inking the former, Ryan Winn and Ruy Jose the latter).

I'm kind of curious to see where this title goes in the next trade or two, given the seemingly sudden departure of its writer, but not quite as curious as I would have been to see where it would have gone had Robinson stuck around to finish whatever the hell he was going for with it.
Posted by Caleb at 7:33 PM

I had thought that what Robinson was going for was that Steppenwolf was able to conquer Earth 2 as a direct result of the nu52 Earth having more diverse heroes in their Justice League. I have to wonder who came through the Boom Tube on Earth 3? Kanto, perhaps?

Not sure if we'll see Hourman since Robinson left, but I would have loved to see him in the costume Ross designed for Kingdom Come.

I don't know. It only took six superheroes to defeat Apokolips on Earth-New 52, whereas Earth-2 had eight "wonders" (according to Earth 2 #0), and they seemed to have spent a period of years fighting Apokolips.

Maybe Steppenwolf is just a better conqueror than Darkseid...?

Caleb: I meant more along the lines of raw power. Mr. 8 was more a thinker than a hitter, and we never did find out who the seventh was. And not to belittle them, but
Huntress and Supergirl/PG don't add up to the core JLA. I think the Earth 2 fight needed Flash & Green Lantern, even Aquaman,to have gotten the stalemate needed.

I really would like to see an E2 series that takes place before and then during the war. And I do think Steppenwolf is a much fiercer opponent than Darkseid. More of a Sun-Tzu,whereas D. is more like any single North Korean dictator ever.

I'm curious as to your thoughts on how Forever Evil plays out. If you are not reading it, there was a BOOM (tube) that allowed someone only remembered as "he" to devastate E3. I'd hate to see it be Darkseid again, but a nice twist would be to have it be Orion, since everything is reversed.

I enjoy your blog and reviews, I even read reviews for the trades of books I don't buy, like X-Men: Days of Future Wolverines and the like.

I wanna see more of the Books Of Magic ch.4 Dr. Fate.