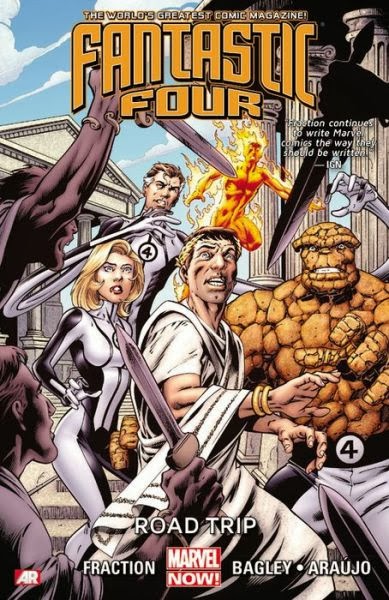 I was pretty excited when they originally announced the "Marvel NOW!" plans for the Fantastic Four books: Writer Matt Fraction handling the plotting and scripting for Fantastic Four, featuring the original team taking children Franklin and Valeria Richards on a field trip through time and space as penciled by Mark Bagley, and FF, featuring a fun, fill-in Fantastic Four taking over teaching the Future Foundation kids while the First Family are away, drawn by EDILW-favorite Mike Allred.

One writer I like on a two books full of characters I like, one drawn by an artist I like pretty well, the other drawn by one of my all-time favorite comics artists.

Well, after a somewhat problematic first issue, and a few more not-so-good issues, I dropped the Fantastic Four book, figuring I'd check it out again later in trade, and simply stuck with the generally excellent FF, which featured the wild, fun, funny spirit of old Fantastic Four comics, and even featured art that seemed more in line with what I expect from the old World's Greatest Comics Magazine, even if the cast of characters were completely different...but similar in some ways. The villains, locations, supporting cast members of the Fantastic Four were all to be found in FF, not Fantastic Four.

As to what I didn't really care for in the Fantastic Four title proper those first few issues, I would have a hard time defining it exactly, at first, but the tales seemed a little lifeless, bloodless and uneventful. Big things were happening, of course, in one issue, they land on a planet that is a sort of lure for a titanic space predator, for example, but it read more like a plot outline for a comic book than an actual comic book story.

The characters all behaved like they should, but they seemed to be play-acting themselves, like under-contract actors who have been at it too long, delivering catch phrases and going through the motions for a pay check.

Unfortunately, reading the title in a different format—a free, six-issue trade in one sitting vs. serially published, $3 issues about once a month or so—didn't really improve the reading experience. The book still seemed to be missing...something, despite being generally well-plotted, full of incident and full of cosmic super-science adventures. I'm actually having a hard time putting my finger on it, which makes me wonder if it's the book or if it's me, but I don't really feel any connection to the characters.

Reed Richards remains the remote scientist always so lost in thought and so far removed from his own emotions that he irritates and alienates his loved ones; here he's concocted a cosmic field trip as a cover for the search to a cure for a mysterious disease that seems to be killing him and will, perhaps, also infect the remaining Fantastic three. Sue Storm is the bad-ass grizzly mom and uber-mother, long-suffering from her husband's poor social skills and aware of the secrets he thinks he keeps. Johnny and Ben bicker and play pranks on one another, but their few interactions here seem forced and unfunny; Ben is struggling with feelings and his own medical problem he is trying to keep secret (The fact that, at least in one panel, he semi-reverts into his evil hammer-possessed form from the Fraction-written Fear Itself might present a clue that his problem differs from that of Reed's).  The kids talk like little kids, albeit ones with minds like their father and some ill-defined powers of their own.

The Bagley-drawn five issues (inked mostly by Mark Farmer, although Andrew Hennessey and Joe Rubinstein each ink an issue apiece) feature a done-in-one issue where the family visits a planet that worships them and, in particular, Sue (thanks to some screwing around with a time machine that Reed does) and he decides to tell Sue about the problem with his powers; another where they visit Ancient Rome in time to witness the death of Julius Caesar, and meet the "pink cloud alien" that replaced Caesar (which will become a character in FF); two issues where they go to witness the Big Bang and end up having to deal with Blastaar (one of my favorite names to type) both there and at the end of time; and, finally, an issue in which Ben Grimm decides to spend his one day a year in human form on Yancy Street, circa the 1940s or so—and he ends up Thing-ing out before it's all over.

It's all drawn well enough, and written competently, but there don't really seem to be much in the way of new ideas, at least not in terms of riffing on the characters in new ways or from different angles. It just seemed to be going through the motions.

That issue, drawn by Andrew Araujo in a more detailed, more illustratorly style, featured the grown-ups leaving the kids alone so they could answer a distress call on Earth, which is being overrun by golden-colored Ultron robots. They leave holographic goodbyes to the children, and then fight to their deaths on Earth, and the comic alternates between the kids watching a character's hologram message, to that member of the Fantastic Four getting killed by Ultrons, with only Invisible Woman surviving (It's my understanding she plays a decent-sized role in the Age of Ultron series proper, teaming up with Wolverine at one point, which is nice, but the way it plays out is that her survival mainly relies on each of the male character heroically giving his life to save her and the others one at a time).

The most interesting idea emerges in this story: Ben's hologram confesses to the children that he thinks he might have been responsible for creating Doctor Doom. Near the end of the collection, Fraction picks up on that idea, as both children remember the events of that night as a dream, while I assume whatever happens during Age of Ultron mostly un-happens, as it was a possible alternate future dystopia kind of story.

I do want to see where Fraction goes with that particular idea, and to see if or how the book changes when Fraction leaves the scripting duties to Karl Kesel (as he left the scripting of FF to Lee Allred in order to focus on other, bigger and likely more lucrative Marvel comics).  But as of the tenth issue of this series I really expected to really like, I remain oddly, surprisingly disappointed.
Posted by Caleb at 6:50 PM

Ben confesses he thinks he may have created Doom? Say whaaa? Is this a nu-Marvel piece of continuity?

...and there`s the reason why I`m not really a fan of Fantastic four. I use to think I am, but I was wrong.

I've decided I'm not a fan of Fraction working on big trademarks. Satellite Sam is one of my favorite reads of the past year, and each successive issue pleases me more. Every new Casanova? A joy. Fraction-crafted, Fraction-crafted projects please me, but when it comes to copyright maintenance work he leaves me cold. I'm not sure if that's me or if there really is a disconnect: his run on Punisher was awkward at best and I simply couldn't get into Iron Fist or Iron Man...