Batman '66 #7 (DC Comics): Me, I woulda went with "ABE-BA-BAM!" but that is the only bit of constructive criticism I have to offer Jeff Parker, who writes another fun, funny Batman adventure for the lead story of this issue, drawn by Christopher Jones. The villain of the piece if False Face—so that's not really Abraham Lincoln Batman is punching in the face, in case you were worried that the Caped Crusader had turned anti-American—and seeing him here was a reminder that there are actually a rather awful lot of Bat-villains that never made the jump to the DCU comics (like King Tut did in 2009). That's remarkable because of how desperate the Batman comics seem for fresh villains, as you can see from the over-exploitation of any new characters of any degree of promise (Mr. Zsasz, Professor Pyg, etc). False Face, more than, say, Bookworm or Egghead, seems an easy import.

The Tom Peyer-written, Derec Donovan-drawn back-up is a bit sharper and more focused, due in large part to its shorter length. The Joker is the villain, and the source of his downfall is rather interesting. Seeking to maximize profits, he downsizes his gang, and while it looks efficient enough on paper, you can only demand so much work from so few employees while remaining an effective operation, no matter what your business. Relevant!

I also learned a new word from Peyer's story: Flagitious, characterized by brutal, cruel or vicious crimes, as in "Protecting Gotham from miscreants is our business, you flagitious funster!" 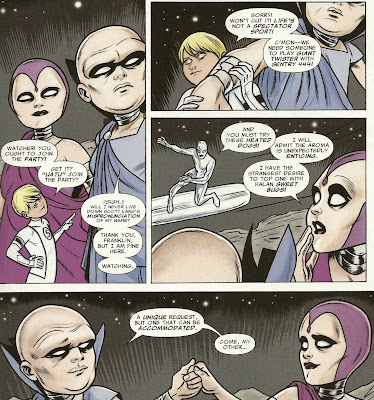 FF #16 (Marvel Entertainment): There's Uatu The Watcher and his pregnant wife at a family cookout with the Future Foundation on the moon. What's next for him? I believe Marvel is going to have him murdered in service of their next big event story.

Well, this is the final issue of Fraction, Allred, Allred and Allred's run on Marvel's most fun title, and I have mixed feelings. I will be somewhat sorry to see it go, in that I so enjoy getting a new, quality Mike Allred title in comic book form on a regular basis (and the price tag of his upcoming Silver Surfer will keep me from following that in the serially-published format), but I can't say I was at all disappointed with it, given how great the ending of the book was. It was seriously...serious, really, but ends with a more fun, more light epilogue of some length, and the whole 16-issue run was a great, novel-length comic book adventure.

It sounds as if Scott "Ant-Man" Lang will be retiring from the Marvel Universe for a bit, and I know She-Hulk's getting her own book and Medusa and her gang have their own event stuff coming up, so part of the book's conclusion seems mandated by the band breaking up, but that's not at all evident in the book.

I'm curious to see what happens with the FF kids, as there's a new Fantastic Four title coming up, but not a new FF title. I do hope that whenever an Ant-Man reappears in the Marvel Universe, he has that sweet-looking Ant-Man helmet Allred designed.

I'll have a couple hundred more words to say about this book elsewhere tomorrow, but, in the meantime, let me say thanks to the creators, and encourage any of you who sat it out to try it in trade (They collected it rather wonkily though, so proceed with caution; I think there's a split trade collecting the first arc of both Fantastic Four and FF, and individual trades for each, too).

Oh, and I'd feel remiss in my complaining-about-prices duties if I failed to mention that while Marvel calls the ten-page epilogue a "bonus," they do charge an extra buck for this issue, so they're not really a bonus at all. 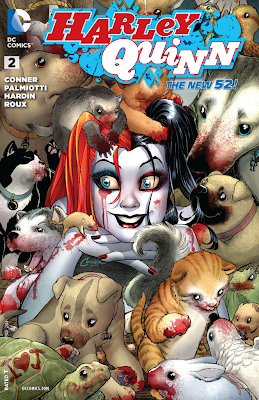 Harley Quinn #2 (DC): Did you guys read Sims' essay on the Harley Quinn character at Comics Alliance last month, which I somehow didn't notice until this week? It is a good essay. I didn't really care for the first issue of this series, but I thought I'd give it another chance and...well, I didn't care for this one either.

It's a weird book in that it's kinda sorta divorced from the DCU continuity, not only in tone but also in content—I still don't understand how Harley Quinn is just, like, a normal civilian and not a wanted criminal, for example—but still uses the New 52 character designs and is sticking with the portrayal of Harley as a cute, sexy, lovable killer. In this issue, Poison Ivy visits, and Chad Hardin draws them scantily clad and sharing a bed, but man, Amanda Conner and Jimmy Palmiotti's script doesn't just leave it at that.

The sub-plots involving a contract out on Harley and her new job as a landlady are moved incrementally forward, while the main conflict of the issue is another instance of Harley as an animal lover, here rescuing a pet-shop full of cute animals which she then feeds a would-be assassin to. Like her, the animals are apparently cute on the outside, vicious killers on the inside. 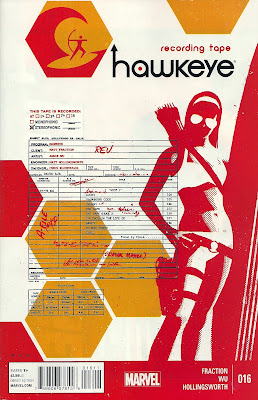 Hawkeye #16 (Marvel): This is a Kate Bishop, Girl Detective issue, drawn by Annie Wu (One of these days, they'll hire Richard Sala to draw a Kate Bishop issue, and I will be deleriously happy about it. Richard Sala is my favorite Girl Detective artist, closely followed by Colleen Coover). In it, Bishop tries to help an old, doddering, eccentric musician from the 1960s get his music back from the Internet or something. It's mostly just Bishop saying clever dialogue, a few tidbits of which aren't age-appropriate (The line about Metallica's drummer was funny, but jeez, how old was Kate when that was an issue? 5? Maybe 7?).

This book, and the Kate issues especially, have the feel of a sort of hang-out comic, where it doesn't really  matter what happens, exactly, as it's so fun to hang out with the character and the creators.

Not sure about that "editor/edit-her" credit on the credits page...
Posted by Caleb at 11:32 PM

...how precisely do you kill the Watcher? It's not as though you can catch him napping.

Is this any relation to the god-bullet that offed old-52Orion?

And who'd want to kill the Watcher anyhoo? Everybody knows the Living Tribunal is the true dick of the cosmik MU.

There needs to be a column dedicated to hilarious comic book sound effects. My favorite is in World War Hulk, the Hulk breaking Iron Man's armor with a "KKKRRRAAKKKKBATHHRRROOOOMM!"

Falseface started in Batman comics to begin with.