Chris Bachalo did not give up on that one costume design 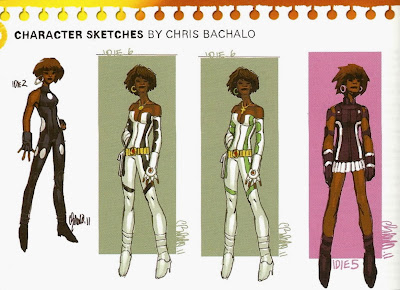 I've been catching up on some recent-ish X-Men comics via trade lately, and saw the above image in a trade paperback collection of Wolverine and The X-Men Vol. 1. The back of the book contains about three pages of character and costume designs by primary artist Chris Bachalo, including the above variations on costume designs for the character Idie (In the issues contained within this collection though, she's never shown in a superhero outfit, just the Jean Grey School's school uniform, so I'm not yet sure what her superhero costume will end up looking like).

Note the design on the far right. Wolverine and The X-Men launched in late 2011, so these were drawn sometime that year, or perhaps even a little before.

So does that costume look at all familiar? 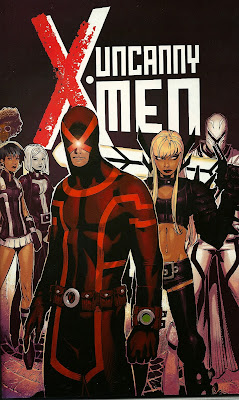 It's the costume that new mutant Tempus from Bachalo and Brian Michael Bendis' Uncanny X-Men, seen on the far left of this image from the cover page of Uncanny X-Men Vol. 1, is now wearing. Only the slightest adjustments (the straps are a different color, and Tempus is usually wearing war paint) differentiate the costume Tempus started wearing in 2013 from the one Bachalo designed for Idie a few years previous. (It's also perhaps worth noting that Tempus is the third female mutant to join Cyclops team in Uncanny X-Men and, like Magik and The White Queen, she also wears tiny black shorts, often partially concealed under the little white skirt there, rather than pants. The ladies on Cyclops' team are forbidden from wearing pants, apparently, while Cyke and Magneto keep their legs covered at all times).
Posted by Caleb at 6:58 PM

Okay, so none of the ladies get pants, but at least she's not also blonde... It's hard enough keeping Emma, Magik, and the Cuckoos, Tempus is the only female character I can keep straight on that book between artist changes.