I have a review of Michael DeForge's Ant Colony, the best book of 2014 (so far!) in this week's Las Vegas Weekly. I haven't really talked about it here at all, but I did post a few images on my tumblr [sic] blog. It's difficult to describe, but man, once you get into DeForge's tiny little ant world, that book is just incredible. Anyway, read my review if you like. 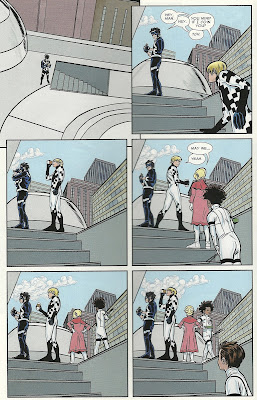 And over at Robot 6, I have a piece about the conclusion of Fraction, Allred, Allred and Allred's FF book. You can also read that if you like.

And, if you're going to Robot 6 anyway, and f you like EDILW (and your reading this sentence makes me think you probably do), then I imagine you'll also enjoy Tom Bondurant's monthly look at DC's solicitations, which is always much more focused and, ironically, less grumpy than mine. He points out that DC will need to launch 11 new titles in May if they wanna hit 52 ongoings.

I imagine some form of Nightwing (maybe a new book starring Dick Grayson under a new codename; Bondurant suggested Azrael, and I'm wondering whether it would be insane or not for Grayson to resume the currently open Robin role), Suicide Squad (Secret Six? Checkmate? Both?)  and Teen Titans will be among the launches, as all three seem cancelled for reasons other than low sales. So that's three-to-four titles right there.

I'm guessing May will bring Plastic Man (spinning out of Forever Evil), Doom Patrol (ditto), maybe but probably not Blue Beetle (ditto again), Club of Heroes or Batman Inc, Red Robin...um, I need three more...Jeez, this is getting kind of hard...it's gotta be difficult to be the person green-lighting New 52 books, trying to find an IP they haven't already tried and has a chance of not being cancelled in 8-16 issues...let's say...Shazam, Mister Miracle (or something New Gods-y) and...um...The Authority...?

Meet back here next month, and see how poorly I guessed!
Posted by Caleb at 8:00 PM

I'm thinking May will bring Young Justice. They'll want a young superhero team on the rolls, and the cartoon was recent enough to have name recognition.

I doubt it will be anything like the David/Nauck series though, unfortunately.

I wonder if Bart is going to die in Teen Titans to make way for Wally West. It seems probable. I was hoping they'd effect a split between the Bart Allen and Bar Torr personalities, with Allen becoming Impulse and Torr becoming Inertia, but that's probably not gonna happen.

I ask this because it buts me that people always have to associate creative products with the calendar year in which they experience said products. I heard about Ant Colony on The Comics Journal some time in the summer of 2013, and though I am from the prairie part of Canada and I can't get Koyama stuff at my LCS, when I was in Montreal in November at the Drawn & Quarterly store, Ant Colony was staring me in the face.

Am I just being a lame hipster? Or, alternatively, does this just have to do with this being the moment you encountered it, making it a 2014 book for you (which is totally valid, btw).

Thinking about it in the context of Scott Lobdell's recent quote—

—I can't really wrap my head around why they DIDN'T do more straight reintroductions of the characters. Lobdell might not have been able to pick up where other's left off, but Bart, Superboy and Wonder Girl all just sorta appeared (Tim Drake was the hard character to fit into a reboot, since there were so many Robins and he needed training and such like).

Bart just appeared out of the time stream one day, right? Cassie was a young girl who wanted to help Wonder Woman, got some magical artifacts and then some powers. Superboy was a clone growing in vat (not unlike Bizarro, who just debuted). Unless DC forbid him from just re-doing those origins, there's no reason those characters couldn't have appeared in Teen Titans as they were, just streamlined a bit in terms of continuity.

In the OLD DCU, I used to wish they'd do a Legion of Super-Heroes series set in the present, wherein Robin and Superboy and the core YJ/Teen Titans would visit the future, see this huge team of super-teens, and come back to the present to found a Legion in which almost everyone of DC's teen heroes was a member.

If THAT'S what happens, that will be awesome and unsettling to me, as I've never mentioned that in public anywhere (and I don't think it would work in the New 52, where there are so few interesting teen heroes).

I was just going by Drawn and Quarterly's release date, which is this month. It is weird/hard/artificial assigning a year to a book. ANT COLONY began being serialized online, too, I-don't-know-when. (And I just called it the best book of this year simply because it's the best one I've read this month that was/is being released this month).

If you've read my "Best Of" lists of the last few years, especially this year, I find them increasingly difficult and sorta usesless.