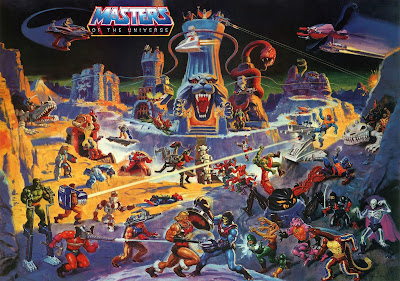 See that? That's just a single image from this fantastic gallery of painted Masters of The Universe-related artwork at Monster Brains, which more than one of my Facebook friends linked to last week. That gallery pretty accurately sums up what the inside of my head looked like at least an hour every day between the ages of, oh, 5 and 8. But even if you don't click on the link to see all the pictures, just take in the one above. Look at all of those colorful characters, almost each of which had its own unique power or gimmick. Look at those crazy vehicles, all based on monsters or animals. Look at those playsets. And in that image above, among those dozens of characters, there are at least three distinct and warring factions of bad guys—Skeletor and his Evil Warriors, Hordak and The Horde, The Snake Men—with whom the Masters of the Universe must contend.

There's just so much there to work with.

Guess how much of that has made it into DC Universe Vs. Masters of The Universe?

Four issues in, the only characters from the Masters of the Universe universe to appear have been the drastically redesigned, "New 52" versions of He-Man, Teela, Man-at-Arms, Roboto, Moss Man, Stratos, Battle Cat, Evil-Lyn, Skeletor and Orko. Orko is, it turns out, the ultimate villain of the piece, with Keith Giffen having turned the annoying/funny magical sidekick from the cartoon series into an all-powerful, unstoppable magical force—a little like what Alan Moore did with Mr. Mxyzptlk in "Whatever Happened to Man of Tomorrow?" and a little like what Sean McKeever did with Wonder Dog during his rather unfortunate run on Teen Titans.

As for the DC Universe, it has thus far been represented by the rosters of the three Justice Leagues, plus minor villain/anti-heroine Black Alice. And that's it, really.

In terms of scope and sweep, it's a pretty narrow, limited to some cherry-picking of characters, and the plot doesn't draw anything of any particular interest to either shared universe setting: Working at Dark Orko's behest, New 52 Skeletor travels to Earth-New 52 in order to drain it of all magic, a process that will destroy the planet. To keep the heroes off his back, he manipulates He-Man into seemingly killing Superman, so the Justice Leagues are hunting for and fighting the Masters of the Universe rather than looking for Skeletor.

And that's it, so far. It's been a very weird crossover so far, with no real indication that this is meant to be a once-in-a-lifetime meeting between two huge franchises full of scores of characters that intersect, compare and contrast in interesting ways. It reads more like your average JLA/JSA crossover from back in the day, when those things happened annually or so; just two teams of super-people sharing a brief adventure to fill comic book pages and if the results are nothing special, well, so what? There's always next time.

JLA/Avengers it ain't, in other words. Hell, JLA/Titans or Avengers Vs. X-Men it ain't. I'd say it's more like New Avengers/Transformers, but I never finished reading that miniseries; and I suppose it's always possible it got better after the first few terrible issues.

To recap, in the first three issues: He-Man's mom came to DC's Earth, where she is apparently from, seeking help to stop Skeletor, who is working with Black Alice for Orko. She finds John Constantine, who, oddly enough, seems to be the main character in this story, getting more panel-time than just about anyone else. They're soon joined by He-Man, Teela and Evil-Lyn.

Skeletor possesses all of the Justice Leaguers save Batman, who is too cool to be possessed, and has them attack He-Man and friends; during the melee, He-Man seemingly impales Superman, who vanishes upon being stabbed. This makes all of the Leaguers mad, and they go hunting the Eternians. And then another group from Eternia, including Man-at-Arms and the others, arrive on Earth, searching for the first group. They run into the Justice League of America.

Things seems to be under control with the creative team at last, at least, with Tony Beard still scripting from Keith Giffen's plot, but Pop Mhan back to handling all of the artwork himself again, after some rather substantial assistance last month. 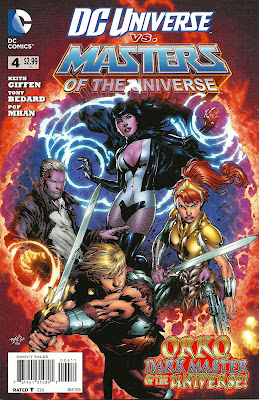 Look, see? There's John Constantine again. Dude's like the face of the DC Universe in this thing. He's appearing alongside He-Man, Teela and, in the center, Zatanna, who does not appear in this issue, and has not appeared in any issue of the series so far.

Evil-Lyn, Teela, He-Man and He-Man's mom are at Stonehenge, recapping the plot, where they've found one of the magical siphon thingees Skeletor is using to drain Earth-New 52 of its magical essence. Evil-Lyn tells them they can use it to find Skeletor. A determined He-Man tells her to "hurry," because "if we don't stop my uncle, who will?"

That sets up the next two pages, full of people who would like to stop his uncle, Skeletor.

PAGES 4-6:
It's (some of) the Master of the Universe vs. (some of) the Justice League of America! Stratos vs. Hawkman! Man-at-Arms vs. Green Arrow! Green Lantern Simon Baz versus the most poorly drawn version of Roboto you can imagine! And, most amusingly, Martian Manhunter vs. Battle Cat!

That last match-up shouldn't be much of a fight at all, given that Martian Manhunter's powers include super-strength, invulnerability, invisibility, intangibility, shape-shifting, telepathic powers and devastating eye-beam weapons referred to as "Martian Vision."

Battle Cat, on the other hand, is a large, green tiger.

J'onn's strategy for fighting Battle Cat, however, is to turn into a cat-man and try to tackle Battle Cat, who grabs him, throws him down, and then slaps him across his stupid Martian face. Congratulations, Martian Manahunter! You've just reached the nadir of your career!

While the battle rages across five whole panels, Colonel Steve Trevor, hiding behind a car, uses his cell phone to call Wonder Woman's bracelet and ask her if these are her hostiles. She says she'll be there to help capture and interrogate them with her magic rope. 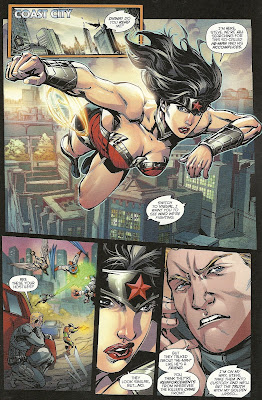 This final page looks so much like it was drawn by Howard Porter, I had to re-check the credits to make sure that it was indeed Pop Mhan who was drawing every page of art in this issue.

In conversation with Alfred, a brown-haired Bruce Wayne realizes that Superman isn't really dead, because it's just a little too convenient that his body completely disintegrated after being stabbed to death. Also, there's no way DC would kill Superman off, even temporarily, in a stupid little miniseries like this that no one's reading. 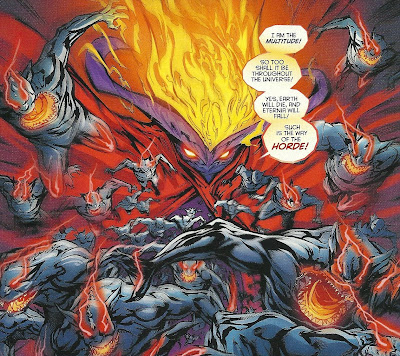 Dark Orko tells Skeletor and Black Alice his plan, which involves converting all life into his Horde or whatever, and they realize that serving Orko may not actually be in their best interests.

We rejoin the MOTU vs. JLOA battle already in progress. The Savage Hawkman tries stabbing Stratos, who is mainly just avoiding him, and then he KRAKs him with his big, golden, spike-covered mace.

Martian Manhunter has completed his transformation into a large, green, cat creature and is trying to reason with Battle Cat, who slaps the shit out of him again. 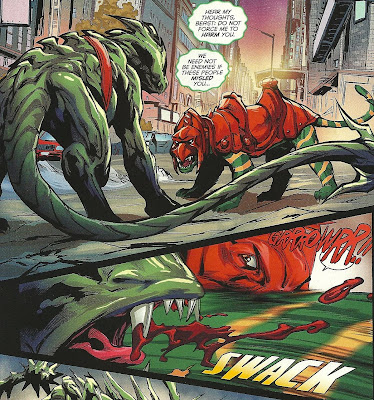 Green Lantern, having apparently defeated Roboto off-panel, now goes after Moss Man, who uses his plant-controlling powers to smack him around with some trees. GL responds by creating a large green chainsaw which he is about to chop Moss Man's arm off with (!!!) when suddenly... 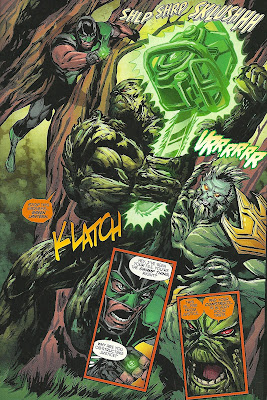 Swamp Thing snatches the chainsaw out of the air, grabbing its whirling blade in his hand (SHLP SHRP SKLUSHHH is the sound a chainsaw blade makes in the palm of the hand of a muck-encrusted mockery of a man, if you're wondering), and slowly tells GL to stop this madness and that his "construct...is in very poor taste."

Justice League Dark, having been recruited by Constantine last issue, has come to break up the fight—by beating on Justice League of America. Frankenstein blocks Hawkman's mace, which he was about to use to crush the skull of poor, helpless Stratos (JLoA is pretty fucking hardcore, if this is their idea of taking the Eternians alive). Deadman possesses Green Arrow, uses a flame arrow to chase Martian Manhunter away from Battle Cat (and, incidentally, make J'onn say "SQUEEEE--!", but not in the Internet's general usage of that word), and Black Orchid runs up and punches out Steve Trevor.

The Masters are the JLD are then teleported away by magic.

Madame Xanadu cast the spell to rescue the two teams from Trevor's Leaguers. Together with John Constantine and Batman, they plan on stopping Skeletor and figuring out where Superman is being kept so they can rescue him.

While Batman narrates an inspirational speech, the artwork jumps around to show us who is where: He-Man and his team are just outside Skeletor's headquarters in the House of Secrets. Skeletor and Black Alice are still talking to Orko. And Superman? He's trapped in the flaming portal in the torso of Dark Orko, the portal that used to be the big, black O on his little purple cloak, back when he was the wacky sidekick and court jester in Eternia.

Next? "The Story of Dark Orko," according to the last-page blurb. I can't wait.
Posted by Caleb at 8:37 PM

Cool peice of dialogue. I`m guessing...best one in the issue.

Jonn just wanted to try the pacifistic route this time. Have more of a challenge. It`s boring to be ridiculously powerful, and not fight against gods.

Though, that is pretty stupid, nonetheless.