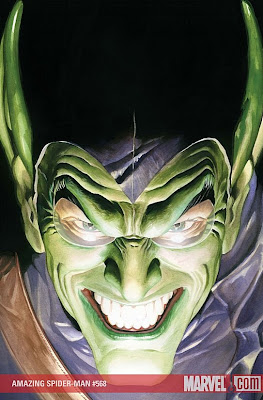 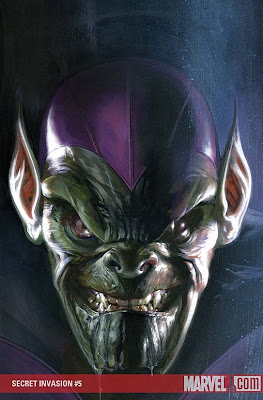 Hey, if the Green Goblin were a Skrull, how would you tell? 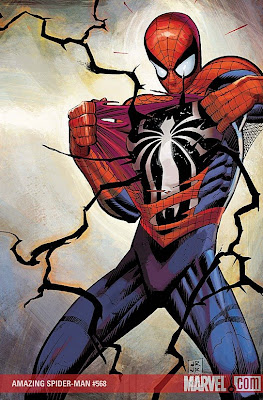 AMAZING SPIDER-MAN #569
Written by DAN SLOTT
Pencils & Cover by JOHN ROMITA JR.
"NEW WAYS TO DIE!"
SPIDEY'S a villain? NORMAN OSBORN'S a hero? What kind of crazy, mixed-up world is this? Next thing you'll tell us is that black is white and white is black…Or maybe that has something to do with VENOM, MISTER NEGATIVE, and the birth of an all-new Spider Villain! Or would that be an all-new Spider-Hero? Either way, True Believer, this is a 1st appearance you do NOT want to miss!

Well, for the second time since they hit the reset button, the Spider-office has assembled a creative team I'll have a hard time resisting. As long as the current Slott/Marcos Martin arc isn't awful, I imagine I'll check this one out too. Even if this is going to be an arc featuring that stupid-looking Anti-Venom character that EW made a big deal out of a few weeks ago for some reason. 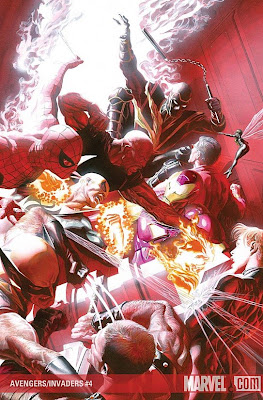 Wow, Ross sure paints Spidey’s webbing true to the way it looked in the movies.

Which is, of course, another way of saying, “Ewww!” 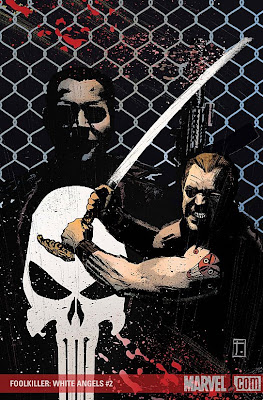 FOOLKILLER: WHITE ANGELS #2 (of 5)
Written by GREGG HURWITZ
Penciled by PAUL AZACETA
Cover by TOMM COKER
"Punishement Fits The Crime," PART 2
Los Angeles. The City of Angels. For a town that thinks it's pretty, there's plenty of ugly to go around. That's where the Foolkiller comes in -- taking a scalpel to warts, expurgating the cancer that grows in society's gut. This time, the Foolkiller has targeted the hate-crime known as the White Angels, a secret socieyt whose arteries snake throughout the city -- from the back alleys to the Hollywood hills. As he eats his way up the food chain, he's about to cross paths with the one vigilante whose legend exceeds his own. A stone-cold killer that has also targeted the White Angels. A predator that doesn't like to share. Enter the Punisher.

Well, that's one way to improve sales across the Max line—just add the Punisher to all of the books. 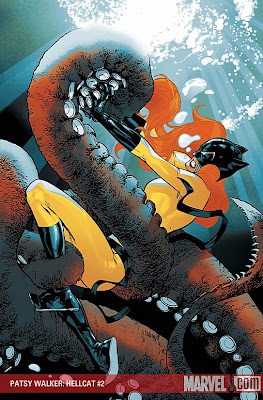 Now that's a cool, classy cover of a heroine being menaced by tentacles! 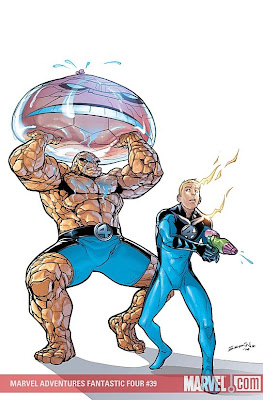 MARVEL ADVENTURES FANTASTIC FOUR #39
Written by CHRIS ELIOPOULOS
Pencils by GRAHAM NOLAN
Cover by SALVADOR ESPIN
It's a day of pranks for Ben and Johnny, that is until reality kicks in and the two have to put aside their differences and save the day. But can these two work together after spending the day trying to GET each other? Find out in the all-silent issue, which we can only call "Silent but Deadly"!

Graham Nolan? That guy is a fantastic artist. What's he doing slumming on an MA title instead of, I don't know, drawing JLoA or Batman or Titans? Ah well, I'll enjoy his work wherever I can find it.

I don't like where the name of this story makes it sound like the issue is going, but "pencils by Graham Nolan," "all-silent issue" and The Thing with a giant water baloon that looks like his own head all add up to an exciting sounding comic book. 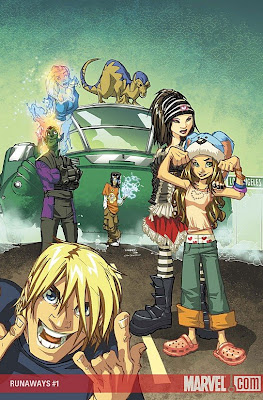 RUNAWAYS #1
Written by TERRY MOORE
Pencils & Cover by HUMBERTO RAMOS
Come see the beginning of a whole new Runaways! Comics legend Terry Moore (Strangers in Paradise, Echo) and super-star artist Humberto Ramos (X-MEN, WOLVERINE, SPIDER-MAN) run back to Los Angeles with your favorite teen heroes. But it’s not the same city they left so long ago. The Runaways try to stay off the radar, but the sins of their parents won’t make that possible…

Assuming, of course, Joss Whedon actually finishes his run on the series by August.

SECRET INVASION #5 (of 8)
Written by BRIAN MICHAEL BENDIS
Penciled by LEINIL FRANCIS YU
Cover by GABRIELE DELL'OTTO
Variant Cover by STEVE MCNIVEN
Variant Cover by LEINIL FRANCIS YU
Sketch Variant Cover by STEVE MCNIVEN
Embrace change. With these two words the Skrull Empire declares their intentions to the entire Marvel Universe.
Embrace change. With these two words thousands and thousands of comic fans who have declared Secret Invasion the comic book blockbuster of the summer brace themselves for the shocking changes that are about to happen to their favorite characters and institutions. Embrace change, True Believer, because change is coming.

Bit presumptuous to say "thousands and thousands of comic fans who have declared Secret Invasion the comic book blockbuster of the summer" before the summer has even began, isn't it? 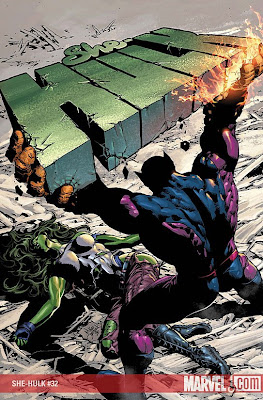 I like this cover. More logos need to be used as deadly weapons on the covers of superhero comics. 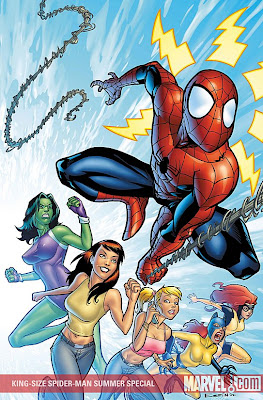 SPIDER-MAN SUMMER SPECIAL
Written by KEITH GIFFEN & PAUL TOBIN
Art by RICK BURCHETT & COLLEEN COOVER
Cover by SALVA ESPIN
August is still summer, right? Yeah? COOL! Then we’re hittin’ ya up with two ALL-NEW Spidey stories from times when he wasn’t Secretly Invading or Branding New Days. First, Spidey teams up with Falcon to handle an outbreak of futuristic weaponry showing up in Harlem, and then MARY JANE takes center stage as she teams up with She-Hulk, Hellcat, Marvel Girl and some other lovely ladies to take on The Enchantress, in this one-shot!

I can’t tell if She-Hulk is supposed to be aroused, angry or a little of both on Salva Espin’s cover there. 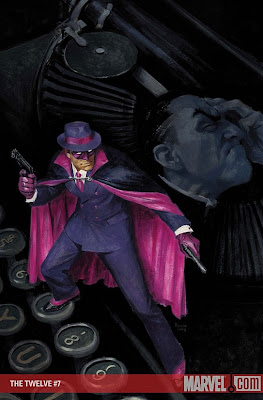 Finally, the first really brilliant looking cover The Twelve. With Kaare Andrews handling the covers, I was really expecting something pretty spectacular for the book—similar to his run on the covers for the Bruce Jones-written Hulk—but no dice. This ones by Paolo Rivera though, not Andrews. 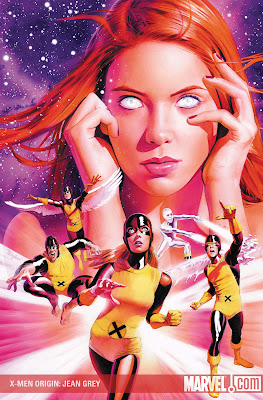 X-MEN ORIGINS: JEAN GREY
Written by SEAN MCKEEVER
Art and Cover by MIKE MAYHEW
From the moment Professor Xavier arrived on her doorstep, young Jean Grey knew things would change forever. But she was never prepared for how strange life at the Xavier Institute could be - or just how dangerous she truly was. Will she be able to harness her budding powers in time to prove herself a hero? Or will the ghosts of her past haunt her forever? Sean McKeever and Mike Mayhew bring you the first adventure of the X-Men’s mightiest mutant. Guest starring the original X-Men!
32 PGS./Cardstock Cover/Rated T+…$3.99

Written by who now? Hmm, this is weird. Did McKeever’s exclusive with DC expire and not get renewed, or has this script been waiting around for well over a year to get turned into a finished comic book?

Also, note the price—$3.99 for a 22-page comic (those other 10 will be ads), with a notation for a cardstock cover. It seems Marvel is using cardstock covers on rather random seeming new projects to test the waters for a price increase.

UPDATE: Pretty much everything in the above two paragraphs is off-base. Check the comments for some info on the project from someone who really ought to know, and click here for a bit more.
Posted by Caleb at 2:40 PM

Regarding the JEan Grey special - The artist, Mike Mayhew, is known for the heavy use of self-produced photo-reference, and for photographing each scene he paints. I bet the script ahs been turned over a long time ago, and Marvel was waiting for the artist to finish his work before soliciting.

Yeah, McKeever said on his blog that he wrote the script a while ago, before he went exclusive with DC.

i feel like kaare andrews' stuff has fallen into the michael turner quality as of late. I haven't seen him produce anything better than those hulk covers or the wizard commissions.

If the Green Goblin were a Skrull, who would know? Heck for a second or two, I thought he was the Joker, and was wondering what happened to his ears!

Skrulls are beginning to pall on me.

Comics should be escapist fun, not a luxury item. Already I can sense my pull list getting shorter.

I remember when gas and comics were both $1. I feel old and sad.

That cover for The Twelve is cool though. And that She-Hulk cover is the best use of interaction with the logo since Cyclops blasted the logo of Uncanny X-men 176 while he was fighting that octopus. Huh. I wonder is it's the same octopus that Patsy Walker's tangling with. Crossover?

Hey, Caleb. The Jean Grey comic is actually a 30-page story. Marvel really should have pointed that out in the solicit.

While we're at it, how would anyone know if Drax was a skrull?

Drax doesn't have a bumpy chin.

Martian Manhunter (in his current incarnation) is a Skrull!