On the subject of The Lost World... 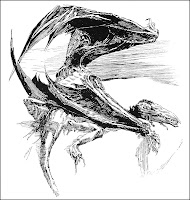 Last week I wrote a brief post comparing and contrasting aspects of Arthur Conan Doyle's 1912 novel The Lost World with various other media works sharing its name and people-meeting-dinosaurs premise. Today ace comics blogger Dirk Deppey the fine Golden Age Comic Book Stories blog, which posted Joseph Clement Coll's original illustrations for Doyle's Lost World, and, as you can see from the single image I swiped and posted above, it's fine, fine work.

I've been reading some turn-of-the-century adventure novels recently, and I find myself fascinated with the ways dinosaurs are depicted in them, reflecting popular understanding of their appearance and likeness at the time, versus what we now know (or think we know about them).

There are several sections of The Lost World describing large predators with faces like toads that sometimes stood on all fours, sometimes on their hind legs, and could jump like kangaroos. I think that's what Coll is drawing in these images. I have no idea what species Doyle had in mind for those passages. I thought he was referring to an allosaurus or a similar predator (the silent movie adaptation, made in Doyle's life time, was lousy with allosaurs), but Coll draws a more familiar-looking, bipedal dinosaur later.

Anyway, go take a look, and dig that line-work. It's gorgeous, gorgeous stuff.
Posted by Caleb at 2:17 PM

I've been curious about century-old adventure novels ever since I first read The League of Extra-Ordinary Gentlemen. I'd love to read a post (or just an e-mail) on what you'd recommend & why. I (finally) just started the John Carter books.

There are a lot of books I've been meaning to read forever, and I just started getting around to some of 'em, usually when I read a movie or comic that makes me curious about the source material.

Like, I read a Joe Kubert Tarzan collection, which lead me to watch some old Tarzan movies, which lead to looking into some old jungle adventure stuff.

—Green Mansions by W. H. Hudson because I heard that's where Rima the Jungle Girl originated, and that it inspired Sheena, Queen of the Jungle. It's not really an adventure story, but really well-written, if you excuse a narrative stumble here and there (and don't mind the White Men Rule! racism that's in, like, all of these).

—Trader Horn, which isn't actually a novel so much as a weird hybrid half-memoir, half-behind the scenes memoir. It totally rules, and was the inspiration behind the film of the same name (which is pretty hard to track down, but worth it), which in turn inspired the first Johnny Weismueller Tarzan movie. It's about an old British man telling a woman about his adventures as a young trader in Africa, which involved lost of fighting, wild-animal shooting, some wars, and the rescue of a white goddess.


—The Lost World, obviously, which I was rather surprised how much I enjoyed. I flew through it in two sittings, which is really unusual for me (I'm not much of a fiction reader, preferring non-fiction).

—The Land That Time Forgot by Edgar Rice Burroughs, which was fun to read and featured one of the zaniest plots ever. Well, not the plot so much as the premise, I guess. Basically, there's this island where evolution works in such an insane way I can't even describe it; the introduction tried to explain it to me, and I didn't really see how nutty it was until I actually read the books myself (there are three novellas, which add up to a big, longer novel).

And that's about it. I hope to get to Tarzan and some more Burroughs stuff shortly.