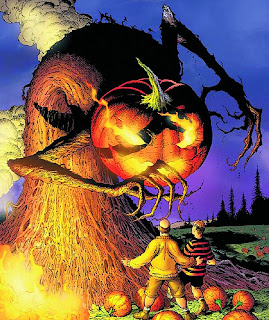 Late last night my fellow Blog@ contributor David Pepose linked to this interview on Isn't It Cool News, the ugliest designed website on the Internet. There's a sort Q and A between DC Comics' Senior Vice President/Executive Editor Dan DiDio and an anonymous person using the name of a DC character as his or her (or its?) pseudonym.

BUG: I know you have to go and that you’ve already revealed a lot of stuff here at the Con, but do you have any scoops you can share with AICN?

DD: Yeah, I’ll give you a scoop. I’ll give you a spoiler. You know what, I had so much fun writing METAL MEN that I’m actually going to be taking over a monthly title coming up at the end of the year.

Okay, let's set aside questions of how talented a writer Dan DiDio might be for a moment. To be perfectly honest, I don't even have a strong opinion on the matter. I've read the Superboy issues he co-wrote, and while they weren't great comics, they didn't cause me to drop the book or anything. I've been reading his Metal Men strip in Wednesday Comics, and that's been fine; again, not brilliant, but not bad (there are certainly worse scripted strips in Wednesday Comics). I read a short Blue Devil story/It's The Great Pumpkin, Charlie Brown parody he wrote for one of DC's Halloween specials and that was godawful. And that's it. Aside from DC Nation columns, that is the sum total of all Dan DiDio writing I've read.

So from what I've read, I can only say DiDio seems capable of writing serviceable comics scripts.

But again, let's forget about that for a second, that's not what confuses me about DiDio writing an ongoing comic for DC.

No, what confuses me is that Dan DiDio is probably the most unpopular person in mainstream comics, the only person rivaling his unpopularity being Marvel Comics' Editor-in-Chief Joe Quesada.

It's just the nature of the job really. When you're the person in charge (or even perceived as in charge) of managing a decades-old fictional superhero universe patronized almost exclusively by change-resistant, entitled, lifelong fans who feel a certain degree of ownership over the characters they don't actually have any control of (none of which I necessarily mean as an insult; that description certainly applies to me), then you're going to be unpopular. Hell you're going to be disliked, hated even.

Every little change that goes on in that universe is going to be laid at your feet, particularly the bad changes, or the things people don't like. Was it Dan DiDio's idea to kill off Ted Kord, have Sue Dibny raped and killed, bring Jason Todd back to life, not give Stephanie Brown a memorial case in the Batcave, de-reboot DC's post-Crisis continuity (and then re-de-reboot it), publish Countdown, make Dwayne McDuffie's life miserable, kick Superman out of his books for a year and keep Judd Winick employed? Sure, some of those might have been DiDio's ideas, or at least ideas he okayed,but not everything that goes wrong in the DC Universe or DC Comics is necessarily his fault, it's just that since the buck stops with him, that he's the guy who has to go out and sit in the dunk tank all the time, he's who gets the blame, deserved or not.

And all the good stuff that goes on at DC? Well, it's usually assumed that that's all because of the particular writer or artist, and DiDio doesn't even get credit for not stopping it from seeing publication (while he does get blame for not stopping the bad stuff).

So, the point is, deserved or not, DiDio is one of the most hated people in mainstream comics.

Now, what sells mainstream comics to fans today? A couple of things. The character or title, to a certain degree. The perception of importance, as in the case of certain event comics involving crossovers or character deaths, resurrections or mantle-passings. And the credits—who's writing and who's drawing.

Decades ago, like, before the mid-70s, I imagine, it was the characters that sold the comics, but now that the readership is mostly adult and thoroughly understands that not only are comics made by particular people, but how they're made, that's not always the case—in fact, I imagine it's rare.

For example, if people used to read Disney duck comics because they were Disney duck comics, and to be particularly excited when they got "the good duck artist," now they would look past the publisher and title and look to see if it was a Carl Barks comic or not.

Grant Morrison, Geoff Johns, Mark Millar, Brian Michael Bendis, Ed Brubaker, Warren Ellis, Jeff Parker, fans read their comics because they see their names on them, not because they can't wait to see what Booster Gold or The Hood or Spider Woman are up to these days. And, likewise, people avoid comics by writer's whom they don't like.

And the people who buy DC Comics? They do not care for this Dan DiDio character. So putting his name on a book seems like stamping a "Do Not Buy" on it, and I can't imagine why he or anyone at DC would think this was a good way to sell comics (Joe Quesada, while being similarly hated, is in a different situation I think, because he had a long-ish career as a fairly popular artist before he assumed the EIC spot at Marvel, and started becoming the focus of fan hatred. Additionally, I think there's a general perception that editing is closer to writing than it is to drawing, that a person's editorial work might reflect one's writing more than one's ability to draw. Hence comments from Quesada fans like, "I might hate every single decision he's made since he became editor in chief, but he draws a really cool Spider-Man" or whatever).

To parse the scoop that DiDio gave "Ambush Bug," he says he'll "be taking over a monthly title," which means he'll be writing an existing one.

What might that be? I'm not sure. The most obvious one would have been Teen Titans which he was editing (and seemingly rather aggressively when it came to story suggestions, given the merry-go-round of writers since he took over), but then DC just named a new writer, Felicia D. Henderson, who is something of a "get" (Of course, if she was starting in the fall and leaving by the end of the year, that wouldn't be all that unusual for Teen Titans; Adam Beechen was the "regular" writer for somewhere between one and three issues). Adventure Comics, a new book starring Superboy and The Legion of Superheroes might also be a good bet; it's going to be written by Geoff Johns, but Johns' services are always needed elsewhere, so maybe he's planning on getting it started and then leaving it to someone else, a la Booster Gold.

I guess we'll see, but unless it's a book featuring a very popular character and DiDio's teamed with a very popular artist—Batman with Jim Lee?—I can't imagine it not doing more harm than good.

It just occurred to me that a Dan DiDo/Joe Quesada comic book done for charity would be a really cool project.
Posted by Caleb at 7:59 AM

Grant Morrison, Geoff Johns, Mark Millar, Brian Michael Bendis, Ed Brubaker, Warren Ellis, Jeff Parker, fans read their comics because they see their names on them, not because they can't wait to see what Booster Gold or The Hood or Spider Woman are up to these days. And, likewise, people avoid comics by writer's whom they don't like.

I definitely think there are people who are more interested in Batman as a character rather than the creative team involved. How else to explain Judd Winnick and Tony Daniel? In contrast, the hatred for DiDio might actually cause folks to buy his book just so people can complain about it; "no bad publicity", and all that.

I also think the internet gives a very skewed view of just how many people like or dislike something or someone. Bloggers (and Twitterers, and forum/Facebook/MySpace junkies, etc.) may gnash their teeth over Dan Didio, but most of the general comic-book-reading public doesn't consist of bloggers (etc.), or even people who bother to read blogs (etc.). Here's an example: the bloggers (etc.) who have been dissing Didio have also been tearing Frank Miller's recent stuff apart, and yet it continues to sell. [Shrug.]

This actually is not a bad move.

Unless DiDio kills off Professor Mangus (or yet another member of the JLI), depicts Tina being raped by one of the Royal Flush gang or has multi-episode arcs featuring a trench-coating wearing Marvin, Wendy and Wonder Dog, then it will give him a chance to show fans a different side. At this stage, showing a different side would be a good idea.

How about conflict of interest?

Is an editor-in-chief in a position to make events center on his book so that you HAVE to buy it to understand the bigger story? What kind of oversight can an editor provide his or her boss?