Justice League of America #36 (DC) Someone at the shop today mentioned that Len Wein’s fill-in arc between the end of Dwayne McDuffie’s run and the beginning of James Robinson’s read a bit like he volunteered, “Well, I have this old script lying around…”

That makes sense. It explains the focus on an old group of JLA villains—this issue is almost half devoted to the origin story of Amos Fortune and the Royal Flush Gang, which I could have sworn Steven Englehart included in his JLA Classified arc from a few years back—as well as the fact that the specific heroes involved could be any heroes, really.

It also explains why #35 had six artists (two pencillers and four inkers), and why this issue still has four (although now it’s down to just one penciller and three inkers). I guess editor Eddie Berganza rounded up the first eight artists he could find with some room in their schedule and gave them a week to pound out a three-issue arc?

This issue certainly looks rushed as hell (The credits on the front cover of the book are different from those on the inside of the book too; and the credits on DC’s website are way off). Tom Derenick is the penciller, and while I normally like his work well enough, it is incredibly rough this issue. Check out Dr. Light II on page five, for example, or Wonder Woman’s shifting anatomy on page six.

With so many people contributing to the pages, it’s hard to tell who’s to blame for the sub-par work—maybe Derenick was simply providing super-rough pencils, and some inkers did a better job finishing his work than others?—but no one should be proud of this comic.

The fact that 75% of the Justice League quit just because, and that no one else in the DCU has stepped up is pretty unconvincing, and Wein doesn’t do a great job of selling any of these actions. Nor are the Royal Flush Gang depicted as much of a threat. Any one of these super-characters should be able to mop the floor with 52 people dressed like cards in the space of ten pages, and yet Wein has to try and keep this thing going for 66 pages.

I suppose that explains the space given to Fortune’s origin.

Marvel Adventures Avengers #39 (Marvel Comics) Writer Paul Tobin seems a bit off his game on this particular script, as it isn’t up to his usual tight, nothing-wasted standards, and it seems cobbled together from at least three different plots.

The Leader, The Abomination and The Rhino have teamed up to take over a military satellite array to shoot a city-destroying laser, and a couple of the team stop them. But Rhino’s heart isn’t really into it, and wants to quit being a villain. And there’s a strange sub-plot involving Wolverine and hotdogs, which seems there simply to set-up a couple of gags later.

It’s not bad by any definition, it’s just not as good as it usually is.

The art by penciler and Horacio Dominues and inker Craig Yeung are pretty top-notch though. I was particularly impressed with some of Domingues’design work, like giving the leader a big old-school flight helmet and goggles in the opening battle-sequence, and his depictions of Tigra, Cage and Wolverine.

Pay no attention to that cover though; nothing remotely like that occurs within, and Cap and Thor aren’t even in it. It’s Example #983,210 of why you can’t judge a book by its cover—especially a comic book.

Super Friends #18 (DC) This by far my favorite issue of this particular series, and if you’re a fan of DC’s Bizarro-related humor, I’d heartily recommend it.

It’s written by Sholly Fisch and drawn by cover artist J. Bone, and focuses on the Bizarro Justice League, a cooler, cuter, funnier version of the League that appeared in Geoff Johns, James Robinson and Eric Powell’s “Escape from Bizarro World” arc in Action Comics.

They meet the Super Friends in a two-page sequence that is all solid superhero comedy gold. The story opens on Bizarro World, wherein Fisch and Bone introduces us to riffs on the familiar arbitrary opposite nature of the square planet. When the Bizarro Super Friends run out of things to do there, they decide to come to Earth, where the Super Friends are embroiled in a battle with Amazo and Professor Ivo.

Having a team of well-meaning opposite versions of themselves trying to help them complicates the task, at least until Superman and Wonder Woman figure out how to make the Bizarros’ ways work for them.

That’s all I want to say at this point, because I’m so tempted to simply repeat jokes you can find for yourself inside.

Among the activities in this issue is this page, 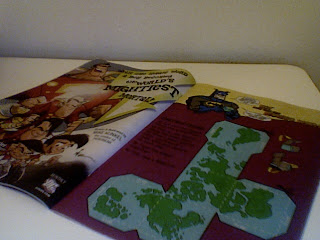 on which Bizarro Batman explains, “us Bizarros never buld things. So here am how you can not make your own Bizarrow World. It am easy. Just don’t follow these directions!

And man, it am not easy at all. I did follow the directions, but had some trouble getting the little flaps to stay glued to the edges of the square globe. Maybe tape would have worked better than glue stick. 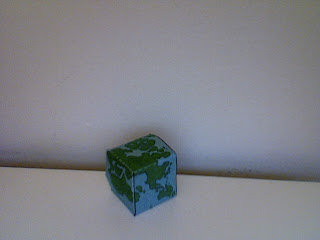 Anyway, it’s pretty neat. Hopefully kids ask their parents to help out, because at 32, I had a hell of a time getting even this far with it.


Tiny Titans #19 (DC) I’m kinda glad all of the ultra-conservative cuckoo birds in the country are currently busy freaking out about the prospect of all Americans getting health insurance somehow leading to concentration camps and our invasion of Poland, as it means it’s even less likely that someone who might object to a Monsieur Mallah and The Brain going on a date in one of the half dozen or so comic books DC still publishes for kids will even notice. 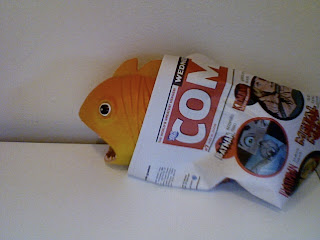 Wednesday Comics #7 (DC) God bless you Wednesday Comics! It’s weeks like these—weeks when there are only a couple of superhero comic books I’m interested in on the shelves—that I appreciate a decent-to-excellent weekly super-comic.

Batman: Note to criminals in Gotham City. If you happen to be smoking when Batman grabs you by the collar, for God’s sake, spit your cigarette out immediately!

Kamandi: Dr. Canis looked cuter with his flight goggles on, I think.

Deadman: Pretty inventive lay-out this week. It’s essentially a huge splash page of a demon upon a tall, bloody throne, with scantily clad, whipped female victims kneeling before him, but a few floating talking heads and scenes drawn behind the back of the throne and the arrangement of dialogue forms implied panels down the page. I have no idea how DC will ultimately collect Wednesday Comics (part of me thinks they shouldn’t collect it), but if they collect all of the stories, I bet Deadman is going to end up being one of the more interesting looking ones in terms of page-to-page design.

Green Lantern: Hey Hal, this salad dressing I made just doesn’t quite taste right, like it’s missing something. Any suggestions? 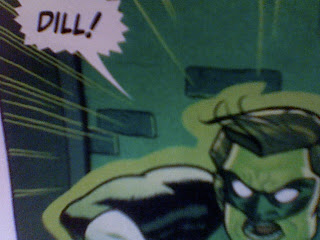 All right, all right, calm down man.

Metamorpho: This would be one of the good weeks of this particular strip, which always looks nice but is paced very strangely.

Teen Titans: This week’s strip refers to the events of Final Crisis: Revelations and Countdown. It’s weird the script attempts to hew closely to DCU continuity, while the art is so divorced from it, with Sean Galloway providing some pretty dramatic redesigns of some of the characters. I like his style, and this particular installment is a lot better than previous ones in terms of establishing place and so on, but it remains the strip that seems most out of place in this line-up of features.

Apropos of nothing, check out Wonder Girl, hanging all over Nightwing in this panel: 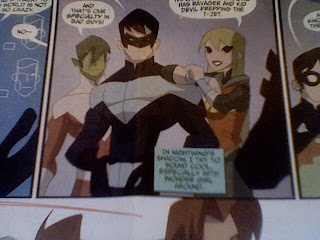 And Nightwing, power-walking into action alongside his teammates: 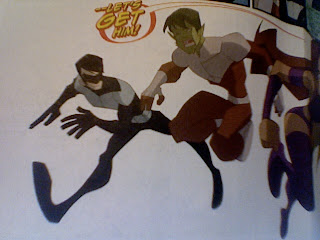 Strange Adventures: Adam Strange has a strange dream in which he meets Dr. Fate (wow, what a great design!), beholds his own “black dog of fear,” and remembers where he left that darn Zeta-Map. You know if I opened this up next week to find six pages of Paul Pope’s Strange Adventures and six pages of Kyle Baker’s Hawkman, you would not hear me complaining about it. And I love to complain!

Metal Men: Why are you so worried about Tin getting bathed in corrosive acids Platinum? If at least half of you guys don’t get destroyed in an adventure, than it’s just not a very good Metal Men adventure.

Wonder Woman: Huzzah! Ben Caldwell sticks with the vertical columns page-design he used last week, and, again, the page is much easier to read. This is the exact story that should have ran in the relaunched Wonder Woman after Infinite Crisis.

Sgt. Rock and Easy Co.: Rock is a poet: “Y’know, you’re puttin’ your neck in a noose for cuttin’ me loose.”

The Flash: Still appropriately Flash-y, a nice blend of Silver Age zaniness with more modern sophisticated story-telling, and fun with the format.

The Demon and Catwoman: The latter vanishes, the former appears.

Hawkman: In this installment, our hero asks, “Of all the islands in all the oceans on Planet Earth-- --why did we have to crash-land on DINOSAUR ISLAND?”

Because Hawkman, then we get to watch you fight dinosaurs for about five weeks, and that’s going to be awesome!
Posted by Caleb at 5:20 PM

This seems like as good a time as any to stop reading Justice League.

Don't make me come over there, Caleb. :)

Well, when a guy spends his entire childhood getting called gay, he's going to feel the need to overcompensate pretty fiercely, and sometimes he's going to lose sight of The Line.

ANother great round up. Especially liked the points about JLA.

Now far be it for me to complain about my free comic-related entertainment dished out daily but...

"Pay not attention to that cover though"

"Having a team of well-meaning opposite versions of themselves trying to help them complicates the ask,"

"Not to criminals in Gotham City."

Yeah we all make typos but this entry had enough that it actually bugged me when reading it.

This seems like as good a time as any to stop reading Justice League.

I think they would have been much better off simply forgetting this arc and running "Cry For Justice" biweekly in the JLoA title. Especially if that's going to lead into the new run on the book anyway.

But I'm not sure how the numbers work out. Maybe it's worth it to publish three moderately-selling issues no one will like in addition to a miniseries that will sell super-well...?

Hell, I'd read that.

Now far be it for me to complain about my free comic-related entertainment dished out daily but...

Sorry; I went back in and corrected them. With the number mistake pointed out above (I was counting creators, but I wrote artists), that seems like an awful lot for one post. (But I don't know, maybe they're all that bad).

Don't worry, it doesn't offend me or anything when folks point out typos...I actually like it since it means I'll look stupid a shorter amount of time than if someone didn't point 'em out.

Aside from the little red squiggly line that informs me when I spelled something wrong--which never catches words spelled right used wrong like those--readers are the closest thing I have to an editor here.

A free editor is a gift from god.