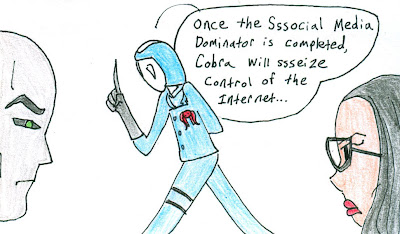 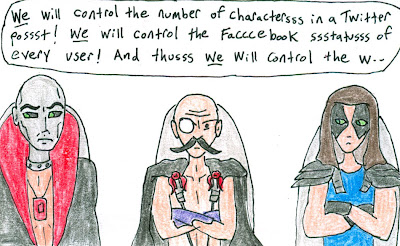 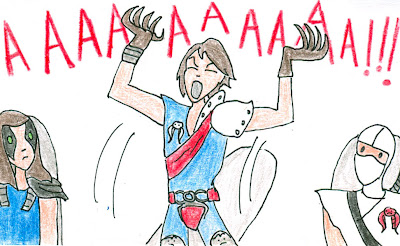 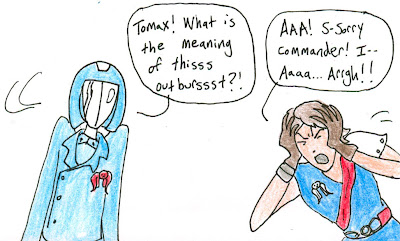 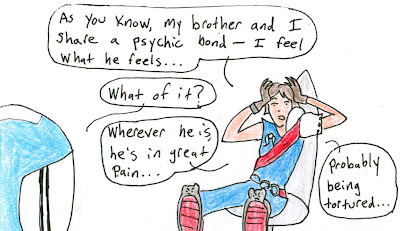 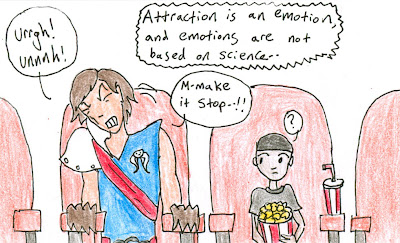 That was the alternate G.I. Joe: Rise of Cobra "review" I planned, but I instead went with a series of head shots, which I thought was funnier and allowed me to draw a much more random assortment of characters. A little while later I decided to try drawing this one up for EDILW anyway, as it gave me a good excuse to watch old cartoons on YouTube while sketching out and drawing various Cobra villains. (Codpieces are very popular among the Cobra leadership, aren't they? Also, what's up with Destro's chest? Was he an early adopter of spray-tan or something? Dude looked positively orange from the neck down)

And as long as I'm sharing, here's the start of the random head shots post: 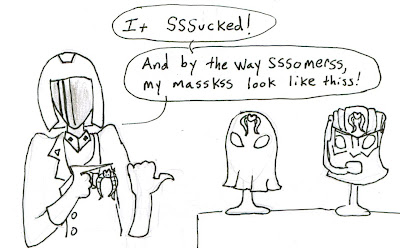 Originally I was going to do a full index card on each character, which would have resulted in a from-the-waist-up image instead of just a head-and-shoulders one, and allow room for other stuff, like Cobra Commander complaining about his mask in the movie.

Next to Snake-Eyes' creepy plastic lips, I think the mask that "Commander" dons was one of my least favorite parts of the movie (which, again, wasn't very good, but wasn't that bad either—like, not as bad as torture). Cobra Commander has two such super-awesome mask options already—the hood and the mirror helmet—that designining a newer, much lamer one for the film seemed really wrongheaded to me. (When I was a kid, I also hated the post-G.I. Joe: The Movie Commander's Iron Man-like suit, even though I did have that action figure).
Posted by Caleb at 2:55 PM

"Not as bad as torture" should be the movie's pull-quote...

You know what was bad also? The Baroness being "good". Missed that one.

Characters that are supposed to be scientists (or inerested in scientific type thinking) who demonstrate scientific knowledge below the level of, for instance, a typical screen writer are one of my pet hates.

I mean jimminy that was a moronic bit of dialogue.

I think too many writers confuse Mr Spock's personality with reality.

Whenever I see someone portay a scientist or highly inteligent individual as emotionally cold, homorless, sexless and `purely logical' I like to send them reminders about the personalities and behaviours of some of the real world's most (pop-culturally) famous scientists (Einstein, Newton, Hawking, Tesla).

Cobra Commander's gonna take over the internet? So his secret identity is... Burrito?

"I think too many writers confuse Mr Spock's personality with reality. "

It's a couple of things. Spock's personality is based on the fact that he's an alien, not a scientist.

Also, Spock never said that emotions didn't exist. He just tried not to experience them.

You know what was bad also? The Baroness being "good". Missed that one.

Without a doubt, that was my least favorite part of the movie. I could handle the lame "star-crossed lovers on opposite sides of the battle" bit if they had just kept her brainwashed and radicalized, and not literally brainwashed by nanobots or whatever.

I never really *noticed* it before, but yeah, Destro's chest is really orange for some reason.