This week in comic book ads

Remember when the majority of advertisements in comic books were for deadly weapons, live animals, candy and other things kids might conceivably want to spend their allowance on, because kids actually read comic books? Well, those days are no more, which is why my issue of Incredible Hercules had an ad for a Kia on the inside front cover, and an ad for the Honda Insight hybrid on the back cover.

I'm always fascinated by the ads in comic book (although, as you may have noticed, I tend to be fascinated by every aspect of comics), due in large part to what they reveal about who publishers and/or their advertising representatives and/or the companies that buy ads from them think are their audience.

Are today's DC and Marvel comics readers the sort of people who would try to buy a real bullwhip or live gecko through the mail, or are they the sort who are looking for a sensible new car with great gas mileage?

Here are some of the ads that caught my eye in this week's super-comics... 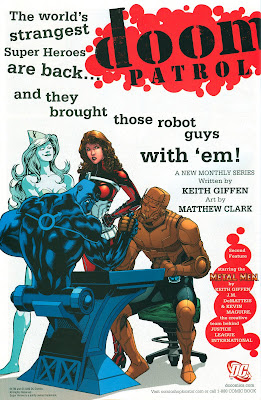 An often rather disturbing amount of super-comic ads seem to be house ads. You know, ads for other comics that the publisher also publishes, which, if DC and Marvel work anything like the newspapers I've worked for, means that rather than selling those pages to advertisers, they are filling them up themselves at no cost, either because they really want to use that space to advertise their other comics (which, in DC's case, seems redundant, given that last page to waste on whatever they want), or because they can't convince enough people to buy ads and therefore have to fill that space with something.

These often tend to be for books that are already guaranteed hits, like Grant Morrison and Frank Quitely's Batman and Robin, for example. I've heard that this sort of promotion of a book that doesn't really need any promotion to sell well is meant to push a hot book into slightly hotter territory and promote buzz. Like, the extra effort is expended to make a huge hit into a sligtly huger hit.

So it was nice to see this ad for the new Doom Patrol, which is anything but a sales slam dunk, and honestly probably needs as much promotion as possible. It's also just a really neat ad. I like how the artists for both features in the book, Kevin Maguire and Matthew Clark, draw their respective characters in the image, which is a pretty cute image over all (took me a second to notice Iron is the table there).

In the same comic I noticed a house ad for the four Red Circle one-shots written by J. Michael Straczynski, which probably similarly need all the marketing push they can get. That whole project just looks dead in the water to me.


Here's an ad for rather expensive looking shoes from a Marvel comic this week: 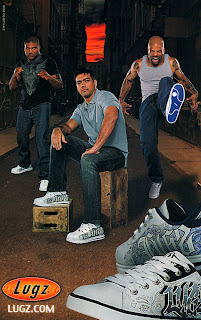 Not sure what they're going for here. These are shoes for really tough, badass dudes who'd like to kick your ass, but won't, because they don't want to get blood or dirt on their brand new, virgin pure, snow white shoes?


At least the shoes don't have little Marvel characters printed on the sides of them though. Look at these things: 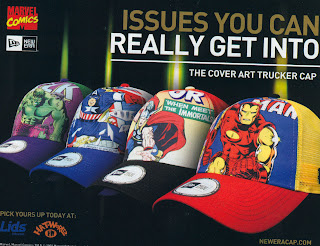 I knew the short life of the trucker hats-being-worn-ironically had ended a few years ago, but I guess if someone's selling Marvel-branded trucker hats, they must be even deader than I thought.


There were a couple of ads for video games in this week's comics, alhtough this is the only one that looked like something I might actually want to conceivably ever want to maybe play someday: 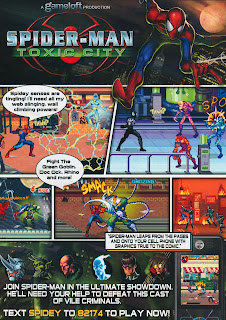 If I ever wanted to maybe someday play a video game again (Which I probably won't). But it looks like a game I could get into—it's old-fashioned, seems to be a side-scroller, it looks like there's cool little sound effects in it and, most importantly, it doesn't look like a wax museum come to hideous life, like Marvel Ultimate Alliance 2 (also advertised in the same issue).

I guess this is for a cell phone though...? I don't have a cell phone. That is what a terrible old man Luddite I am. I haven't played a video game since, like, the Super Nintendo, maybe...? And I don't own a cell phone.

Note the Stuart Immonen-drawn head shots of the villains near the bottom of the page. I'm still used to seeing Mark Bagley's Spider-Man appearing in ads for Spider-Man junk in Marvel comics. Those dudes get paid when their art is used like this I think, which must make drawing Ultimate Spider-Man one of the best gigs at Marvel. 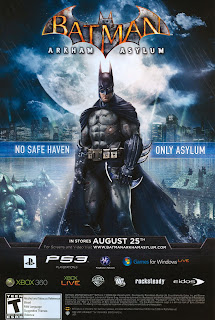 "No safe haven, only asylum." Ugh. Did that ad actually try to make a pun of some kind out of the two different definitions of "asylum?" Aren't puns supposed to be funny? Or at least make some sort of sense? "Asylum" may have two meanings, but the it doesn't have two meanings in this context, nor does implying the second meaning come across as funny, witty or ironic. Just kinda dumb.

Man, fuck this ad! I'm sure a lot of comics readers are pretty excited about this game—I know I've seen about a thousand links to stories about its development on Blog@Newsarama—but this ad makes me hate the game and everything about it. Not that I was ever part of the audience for it anyway (Lego Batman looked pretty cool; if I was at a friend's house and they had Lego Batman, I'd maybe want to play that...or watch them or a small child play it over their shoulder). 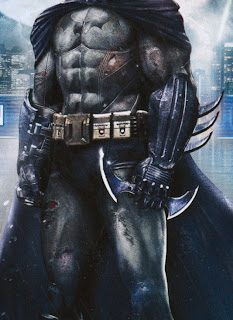 Jeez, got enough armor and padding on there, Batman? I think he's wearing more gear than Iron Man. What a pussy.

Also of interest is the rating, which I did not scan because I just now noticed it. This game is rated "T" for "Teen," because of the following things, listed in this order:

Hmmm. Checking, I see that Ultimate Alliance is also rated "T" for "Teen," but just for mild language and violence (The Marvel smoking ban extends into their video games too, I guess).

I wonder what accounts for all of these things in the Batman game? Blood and violence are pretty self-explanatory. I suppose maybe The Penguin and Commissioner Gordon are sometimes smokers, although I can't imagine how they work alcohol references in. Maybe there are little bottles of champagne lying around the asylum that Batman picks up as power-ups...?

"Mild language" is Batman probably saying "Blast!" and "Blazes!" instead of "Damn!" and "Hell!" (which would be "Medium language") or "Cock-fucking, ass-brained dick-hole!" (which would be "Hot language," if video game dialogue is ranked in the same way that salsa is ranked).

And "Suggestive Themes?" Maybe the games closely patterned after Grant Morrison and Dave McKean's Arkham Asylum graphic novel, in which The Joker is totally gay for Batman...? That's "suggestive," right?
Posted by Caleb at 6:42 PM

"Like, the extra effort is expended to make a huge hit into a sligtly huger hit."

Having played the PC demo, I'm assuming the suggestions are coming from Harley (in her new Arkham uniform), and possibly Poison Ivy, who from the trailer I can tell shows up later in the game.

Considering how dark it is, I surprisingly liked the demo, although there is a glitch (possibly doesn't like my controller) where the forwards and backwards walking somehow got reversed.

I used to have a book that came out in 1993 called "Comic Book Rebels." It had interviews with all the big indie creators at the time and also Todd McFarlane for some reason. McFarlane spent basically his entire time complaining that Marvel only advertised books that weren't doing very well (which inexplicably did not include Spider-Man: Torment), while in most other industries it was the standard to devote the most advertising to the highest-earning items.
He mentioned that you could buy Home Alone in every 7-11 numerous times.

Thanks; I fixed it.

...although there is a glitch (possibly doesn't like my controller) where the forwards and backwards walking somehow got reversed.

Was there a glitch, or was the asylum driving you mad, so you could no longer tell which way was which...?

Suggestive themes is because Harley goes around in a lowcut nurse's outfit.

The demo was pretty good. It's the first videogame I've played where I felt like Batman instead of random vg protagonist dressed like Batman. I'd let thugs almost hit me just so I could see what the various counters look like.(Best one: Batman grabbing the thug's fist, crunching his hand, and then breaking the guy's arm.)

Also, you get to hear Mark Hamill play a Joker that isn't TAS Joker.

I won't complain too much about your review of Batman: Arkham Asylum or brief mention of Marvel Ultimate Alliance 2 video game advertisements as you mentioned you haven't played a video game since SNES. But I will defend them as great games and well representative of the comic book medium and stories they take their inspiration from.

MUA became one of the best selling games and was well reviewed when it hit shelves 2+ years ago and I highly anticipate its sequel's release in September. The story will start off from "Secret War" and continue on to the "Civil War" storyline. It's a blast to play and very reminiscent of the sidescrolling Simpson's or X-Men arcade games of the late 80s-early 90s.

I'm very interested in Batman: Arkham Asylum. Not only was it written by Paul Dini but features character designs by Jim Lee (that's why Batman has so many gadgets/armor), and also probably why it has a "T" rating, because Poison Ivy and Harley Quinn are featured in barely-there clothes (to the delight of many a fanboy I'm sure) and there are also a few "shits" and "damns" thrown in for good measure in the dialogue. Another MAJOR plus is the feature of the original cast of "Batman:TAS" lending their voices to the game. There is nothing like hearing Kevin Conroy voice Batman.

I love your blog and just figured I'd offer my two-cents on the games, because, hell, I'm a game fan too. I don't play often, but when I do I try to play the best games and these look fantastic.

Unless something has changed, Marvel wouldn't be paying Immonen for reuse of the work for hire art he already got paid once for. That's another thing they drove McFarlane and crew to Image back on the day.

It's also why covers are so generic and pin-uppy -- they can be used in licensing deals more easily and cheaply later.