This is This is a Comic Book 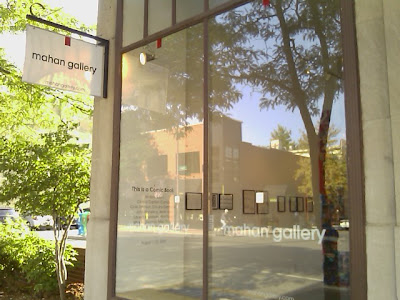 The title of the show is a confrontational one: This is a Comic Book. It’s simple, declarative and unequivocal, challenging whoever hears it to check and see if that really is the case, and then to either agree or disagree.

The confrontation is intentional. This is a Comic Book curators Jimi Payne and Colleen Grennan know this, and are doing more than simply hanging comic art in the Mahan Gallery for a show. They’re also asking questions, starting and engaging in a conversation about what a comic book is, what comic book art is, and how the art world and the comic book world get along, particularly at this point in time, when comics are no longer strangers to gallery walls, and no longer a novelty acts within the “fine” art world.

Now there are an awful lot of challenges to putting comic books in gallery spaces, a topic discussed at length in the show catalog, and This is overcomes two of the most obvious ones in interesting ways.

The first is that comic books are comic books, meant to be handled and read, not simply looked at one random page at a time. The show acknowledges this by including actual comic books in the show. The walls are covered with flat pages, covers and original work, but in the center of the gallery is a little island, strewn with minicomics by many of the artists with work on the walls; you can take in the pieces of the show, but you can also linger by the island, and experience the work of the creators as it was intended to be experienced. There on the walls are comics-as-art, captive and domesticated. Here on the table are comics-as-comics, wild and native. 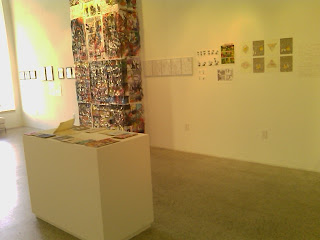 (In the corner of the gallery there’s also a bookshelf containing graphic novels for perusal and purchase, so if you’re wondering what that Cochise character is doing climbing up the mountain in one of Lauren Weinstein’s pieces, you can get a Goddess of War Vol. 1 and find out).

The other major challenge is the fact that, because comics are meant to be read, not taken in as wall-art, gallery presentation sometimes means a white room full of big white rectangles, each including grids of smaller, black and white rectangles within the frames. Not exactly an appealing look for anyone other than comics-fiends, really.

But there’s a great deal of color in the gallery.

The most eye-drawing aspect is certainly Columbus-artist Phonzie Davis’ contribution, a column on the south wall of the gallery, wrapped like a gift in big, bright, poster-sized pages from his Left-Handed Sophie comic book. 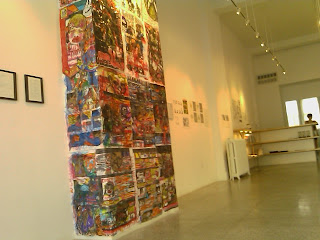 Among the half-dozen others or so also working in color are Panayiotis Terzis (whose contributions include big, bright, King Top strips with borders bordering on design elements, and a multi-layer, silk screen-looking piece piece that Payne says is part of Fantagraphcs’ new Abstract Comics: The Anthology), Lee Mei Yan (whose works are incredibly busy and detailed jumbles of cute, colorful images, only “sequential” in that their size and scope mean they must be taken in one piece at a time, although it’s up the viewer how big the implied panel, and what sequence in which to “read” them), Ron Rege Jr (whose cover to Cartoon Utopia is equal parts classic cartooning and street art). 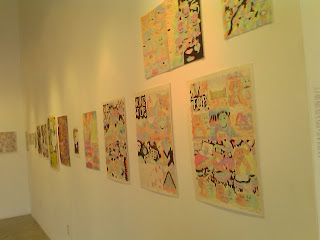 Among the more expected sorts of pieces are those from cartoonists you’re most likely to heard of, although there were certainly some surprises there.

There are a trio of pieces from Nate Powell, who’s recent Eisner for Swallow Me Whole certainly made his inclusion a timely one. There are several standalone pages from his work, and as always it’s fascinating to see the real, original art that the artist’s hands created: The finished product may be the published books, but it’s undeniably exciting to see what the artist made before it went to the printer, and look for clues about how Powell applied his ink or drew his letters into the art.

Weinstein’s pieces were surprisingly large; there are a couple of page from Goddess, and they were remarkably large. Weinstein works big. The finished, printed Goddess is a gigantic comics (Which, as much as I liked it, continues to frustrate me; I can’t figure out what to do with the damn thing now), at 10-by-15-inches, but the original pages looked even bigger; I’m not sure how big she works, but some of the pages were much larger than the traditional 10-by-15-inch piece of Bristol board, so she must work even larger than that and have it reduced? (At least for the Cochise page).

The pieces I personally found most remarkable were those by Anders Nilsen. There are a few pages from his Dogs and Water a very strong and very representational work from Nilsen.

The Dogs and Water pages were marked here and there with white correction fluid, and patches of other pieces of paper placed atop the originals, apparently covering mistakes or drafts that Nilsen wasn’t happy with. For example, this page in the book… 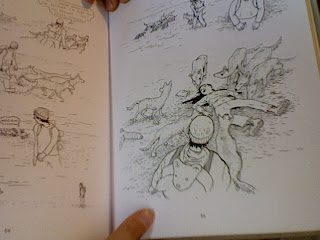 …has a large, polygon of paper covering almost half of the original image, with the drawing extending over both fields of paper. 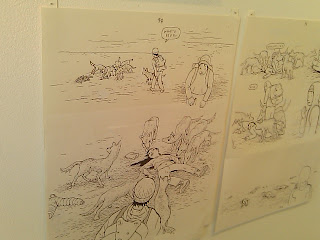 I suppose any actual cartoonists in the reading audience will here think this simply stating the obvious, but from a reader’s perspective, because the finished product so often looks perfect, I often assume it was created perfect, and it’s something of a revelation to see how many imperfections go into reaching that finished perfection.

Also on the more representational end of things are a few complete strips.

Dorothy Gambrell* has several Cat and Girl strips that can be read in their entirety in the space of a single piece. 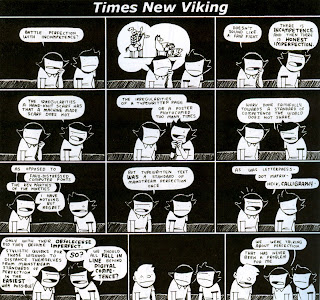 Matt Furie, like Gambrell, has complete strips, although his characters and use of space and line makes his work seem at a greater distance from what one imagines when one imagines “comic strip” than Gambrell’s. Gambrell’s strips could easily appear in newspapers, if newspapers were more awesome than they actually are, where I can’t see in a newspaper…maybe an alternative magazine of some sort. 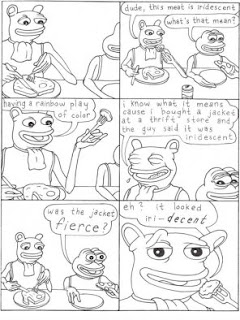 John Porcellino*** also provides complete strips, although his—interestingly enough—aren’t original pages from any of his minicomics, but recreations of them. That is, instead of giving them his original art, he created original art from the original art, if that makes sense. It’s pretty neat.

Porcellino’s work has a special place in my heart, as I first became aware of him shortly after I moved here (at the inaugural SPACE) and found it quite inspirational (In a “Shit, if this guy can publish comics drawing baby raccoons like that, certainly I can draw comics too!” kind of way), particularly the way his work has evolved into the graceful, beautiful, airy abstracted aesthetic it is now.

This is a pretty Porcellino type of piece too: 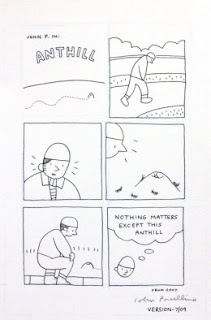 On the other side of the spectrum are sequential pieces without any real story or, like Chris Day’s Droop Till You Drop, which shows Droopy going from drooping to melting, and Noel Friebert’s excerpt from Son of a Gun, which is a six-panel grid with no images in it, simply words written in several different styles. (Shit, I wish I thought of making comics that way). 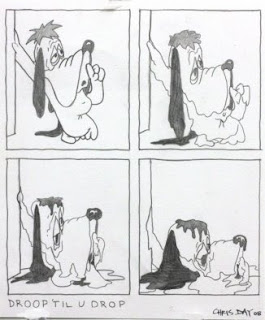 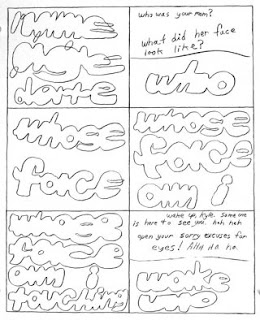 I know it’s all art (it’s in an art gallery, after all), but is it a comic book? It must be. The name of the show says it is, and, after seeing it and thinking about it, I can’t disagree. It’s comics, and wow, what a multitude of definitions to that term there are.


*Speaking of Gambrell, check out her awesome Baba Yaga t-shirt design. I’m not one of those wealthy people who can afford to buy “clothing,” and simply cover my shame with strategically placed back-issues and yarn, but if I were, I would totally buy that


**Hey, here’s an additional Columbus connection to this piece. Did you know that, in addition to being a type font, Times New Viking is also the name of wonderful Columbus band? It’s true! You should totally go buy their album Rip It Off right this minute. I like track 2, “My Head,” and track 9, “The Early ‘80s” best. Also, if they happen to be playing near you, you should totally go see them, as they’re even better live than recorded.

***According to publisher Drawn and Quarterly, Porcellino will be in Columbus on October 12 to promote his new book Map of My Heart at Wholly Craft, a swell store I would spend a lot of money at if I had a lot of money (which I don’t). No confirmation at Wholly Craft’s site though; I imagine they’ll eventually have some info up here.


This is a Comic Book will remain on view through Friday, August 28. For more info on the show and/or Mahan, click here. You should really go see it if you can. And buy a catalog, if you can—they are only 125 of them in existence, so maybe it will be worth money some day! (There much rarer than copies of Chew #1, and people seem to think that will be worth money). And hell, if you got scratch to spare, buy something off the wall while you're at it. I think one of Terzis' pieces would look perfect right above your couch. Thanks to my friend who doesn’t want me to name her for letting me use her retarded Mother Box to take the photographs of the show above. This is my last post on the subject of this particular show, I swear.
Posted by Caleb at 4:34 PM