Some thoughts on Herculean fashion 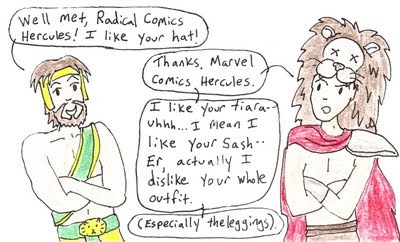 Wednesday Radical Comics published the first issue of Hercules: The Knives of Kush, the publisher's second miniseries starring one of the world's most storied heroes of all time.

Radical's version of the character wears the lion skin that Heracles/Hecules is so often depicted as wearing. In the myths, said skin is that of the Nemean lion, a monstrous lion with impervious skin that was terrorizing the countryside. Slaying the lion was the first of Hercules' twelve labors, and he was awarded the creature's pelt.

When I was a kid and first reading Greek mythology, I thought Herc's lion cloak—often depicted with the forelegs tied around his shoulders or waist as a belt—was pretty cool, giving one of the world's first superheroes his very own cape and superhero costume.

But at the same time, there was something that bugged me about the lion skin. See, when I imagined the Nemean lion, I imagined a gigantic, elephant-sized lion, something a lot more monstrous than the garden variety lions one sees in zoos and circuses. But if the face and skin of the lion's head fits over Herc's head and shoulders like a hood and cape, then it couldn't be much bigger than your average, run of the mill lion.

And if that was the case, well, Herc's labor seemed a lot less impressive to young Caleb (not that young Caleb had slain many lions himself, mind you).

One thing I like about the Radical Hercules' lion hat though is the way the lion's eyes and expression sometimes seems to mirror that of Hercules himself. Check out a couple of panels, by artists Cris Bolson and colorist Dough Sirois: 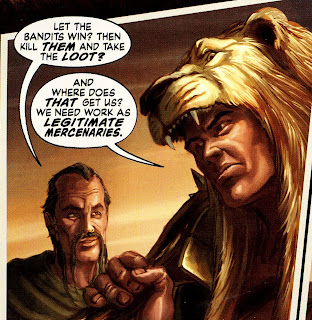 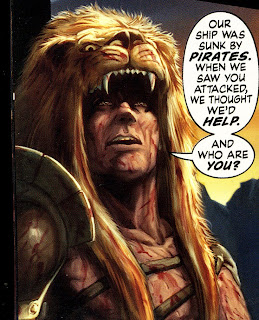 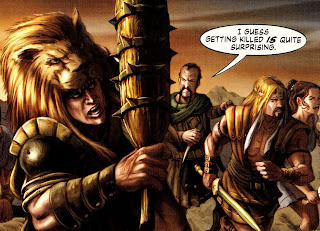 Maybe I'm just reading too much into it though; the way some people swear the eyes of certain paintings follow them around the room. The lion's face was obviously pissed about getting killed, and its face will be frozen scowling forever, while his eyes always seem to be looking down, by virtue of resting atop a very tall man. Maybe it's just the fact that this Hercules is always scowling that makes it look like the lion's expressions mirror his own.

I think it'd be pretty funny if the the lion's expressions always mirrored Herc's though, and if an artist just went nuts with that idea (If an artists hasn't already done that gag somewhere).

While Radical's Hercules looks pretty cool—and no wonder, really, the character design and logo both come courtesy of cover artist Jim Steranko—one of his pals can really use a makeover.

This is Meleager, a hunter: 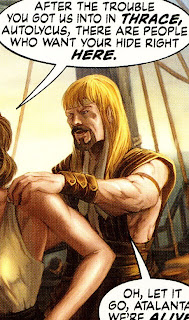 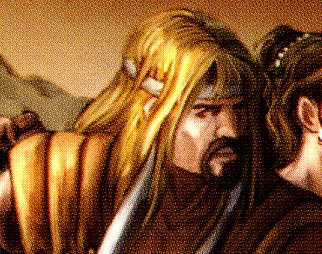 Ugh. That dude needs to either shave his face or shave his head, but that straightened, bright blond hair (with bangs!) and the dark goatee together just make me want to reach into the comic book and punch him in the face.

By the way, I have a review of Hercules: The Knives of Kush #1 up over at Blog@Newsarama, along with reviews of Empowered Vol. 5, Incarnate #1, Mouse Guard: Winter 1152 and Pluto: Urasawa X Tezuka Vol. 3. You can read 'em here.
Posted by Caleb at 3:45 PM

Bear in mind that the Nemean Lion's impervious skin meant that Hercules had to strangle it. Strangling lions is hard to do.

The Nemean Lion wasn't a tough assignment because of its size; it was a tough hombre to kill on account of it's invulnerable hide.
Anyway, I actually like Marvel Hercules' outfit for some reason. It's better than the He-Man costume they tried to give him in the 80s.

They're both better than what Hercules was wearing in the 90s. (He looks so stupid without the beard!)
Here's the Marvel version with his lion skin.
http://images4.wikia.nocookie.net/marveldatabase/images/c/ca/Hercules_Lion1.jpg

Actually, how did he skin the lion even after it was dead given the whole impervious hide thing anyway? I read the stories when I was young too, but can't remember whether they explained that or not.

I think he used the lion's own claws or teeth or something to skin it. Or he just punched it until everything on the inside came out the mouth.

Anyway, I actually like Marvel Hercules' outfit for some reason.

I do to. When they show him wearing something else in flashbacks, it never looks quite right to me, for some reason. I kind of like how there are Marvel looks to the various Greek and Norse heroes and gods (I like Thor's original look better than his newer one, for example).


but that skin shrunk a little when he washed it.


I think he used the lion's own claws or teeth or something to skin it. Or he just punched it until everything on the inside came out the mouth.

Yeah, according to both Wikipedia and Strong Stuff, the children's book about Herc that I just posted about, he used one of the lions own claws to skin it.

Punching it until all its innards came flying out is a cool mental image though.

Or I suppose it could have been like in those old Popeye cartoons when Popeye would punch a bunch of jungle cats and they'd go flying up in the air and then fall back to earth as a rack of fur coats.