"There once was a pillow head who snored his name: Honk-Honk-Ashoo." 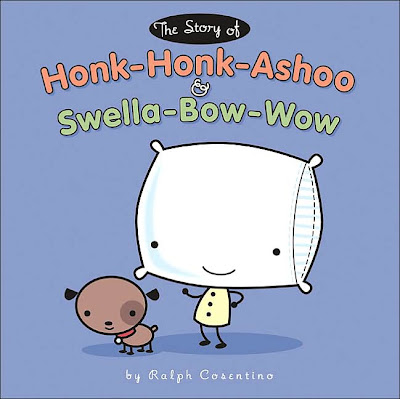 That's the first line in Ralph Cosentino's The Story of Honk-Honk-Ashoo & Swella-Bow-Wow (Viking; 2005). Usually it's the art on the cover of a children's picture book that catches my eye, but in this case I found the onomatopoeia-derived name of the title character to be just as attractive as Consentino's super-simplified, super-cute art.

So, what the hell's a pillow head? Well, it's obviously a person with a pillow for a head. And Honk-Honk-Ashoo's world is one in which sentient humanoid creatures sometimes have objects for heads (when he hears the new word "Marvelous," for example, he looks it up in the head of his friend Smarty Pants, who has a dictionary for a head), or are objects with faces and/or limbs and the ability to think, walk or talk.

Frankly, I don't get it. But it sure is cute!

Here's Honk-Honk-Ashoo's bedroom, on the first page, for example: 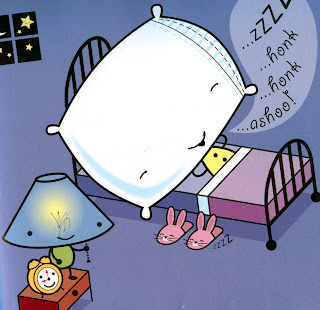 His clock has a face (a face-face, not just a clock face), his lamp has a face and arms, the star outside his window has a face, and so do his bunny slippers, which you can see are sleeping next to his bed.

(You can tell this is a library book that gets taken out frequently by kids by the scribbling on this page. Note the scribble in the lamp's face, and someone went over Honk-Honk-Ashoo's eyes and mouth with a pen.)

The first few pages of the book detail Honk-Honk-Ashoo's day, he gets up when the alarm clock rings, he does his exercises, he reads the funnies while having breakfast, 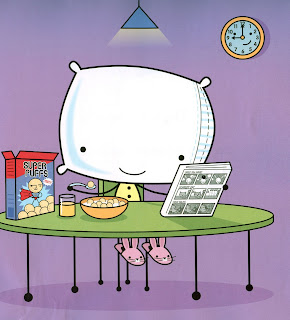 he does his chores and then he plays. 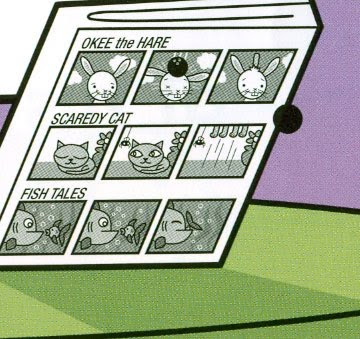 One day, his routine is interrupted by a strange sound, which enrages his alarm clock: 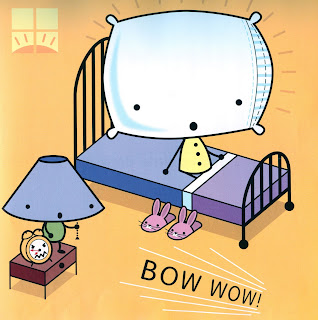 The barking is coming from the little brown dog on the cover, which is being menaced by a dog catcher.

This dog catcher is a gigantic house cat, bigger than Honk-Honk-Ashoo, in a blue coat and matching hat that reads "Dog Catcher." It also has a soul patch.

Now, the fact that about half of the objects in Honk-Honk-Ashoo's universe are anthropomorphized, and to different degrees, was already giving me some conceptual difficulties. But the fact that there's a dog who's just a totally normal dog, while there's a cat that wears clothes, drives a truck and has a job, catching dogs? That completely blew my mind.

Well, short story shorter, the dog is taken to the pound, Honk-Honk-Ashoo feels bad and adopts him, they do everything together, a walking, talking soda bottle named Soda tells Honk-Honk-Ashoo that his dog is "marvelous," Honk-Honk-Ashoo names his dog "Swella-Bow-Wow" and then they go to bed "nice and early, together," with Swella-Bow-Wow getting his own pair of slightly smaller sentient bunny slippers and curling up to sleep in the middle of Honk-Honk-Ashoo's face which, you'll recall, is a pillow.

When I was in high school, this is the exact sort of thing I would describe as "trippy." 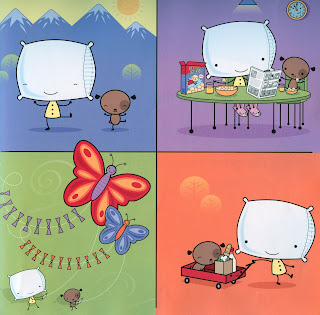 If you get a chance, please visit raplhcosentino.com and check out some of the artist's work, especially the portfolio section. Of particular interest to comics fans will be his 2008 picture book Batman: The Story of the Dark Knight, which I plan to cover here in the near future. 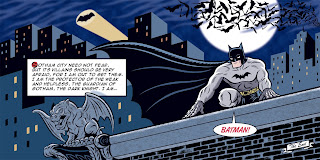 holy crap that Batman is rad!

I've sorta seen this book in passing, and I woulda bet money the author was Japanese. Shows what I know.